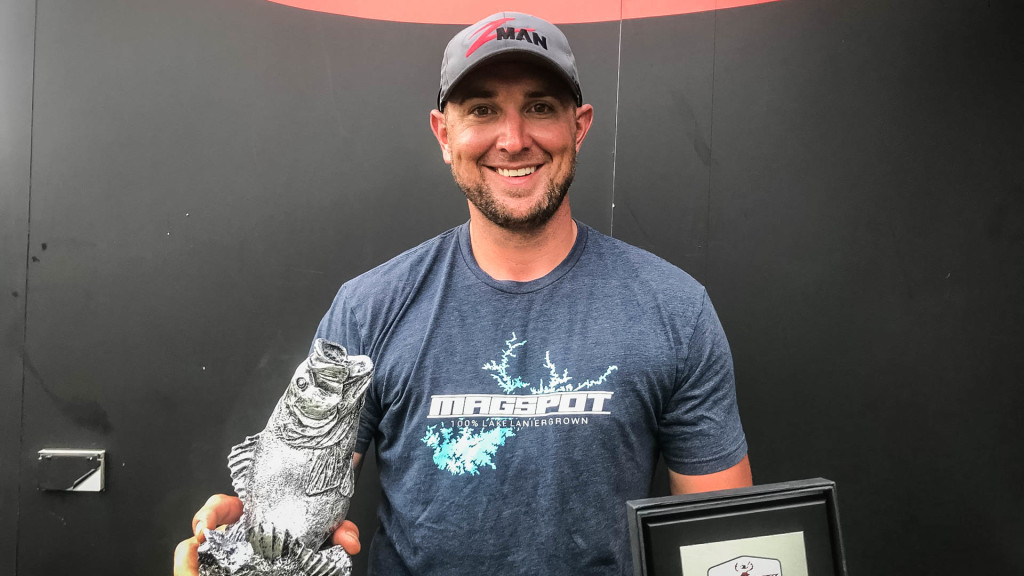 “This Bulldog Division features some of the best anglers in the country, so it’s always awesome to come away with a win against these guys,” said Jordan, who earned his second career victory in FLW competition.

“I bounced around throughout the day on the upper part of Lake Oconee,” Jordan continued. “I made the decision to jump into the event late Friday, so I didn’t really have any practice time. I just ran around and fished new water. It was pretty tough. I didn’t even catch my first keeper until 11 (a.m.).”

Jordan said that he caught his fish on two different baits – a Z-Man Palmetto BugZ creature bait and a Z-Man Mag Fattyz worm.

“I was flipping to isolated wood in areas that the fish would back off to when the sun got up,” Jordan went on to say. “I was fortunate enough to catch two big ones, and that was enough to get me the win.”

Duvall was the highest-finishing FLW PHOENIX BONUS member and took home an extra $500. Boaters are eligible to win up to an extra $7,000 per event in each Phoenix Bass Fishing League presented by T-H Marine tournament if all requirements are met. More information on the FLW PHOENIX BONUS contingency program can be found at PhoenixBassBoats.com.

Thomas caught the largest bass in the Co-angler Division – a nice 5-pound, 9-ouncer. The catch earned him the day’s Co-angler Big Bass award of $292.

The 2020 Phoenix Bass Fishing League presented by T-H Marine on Lake Oconee was the fourth of five qualifying events in the Bulldog Division.

The top 45 boaters and co-anglers in the Bulldog Division based on point standings, along with the five winners of each qualifying event, will be entered in the Oct. 16-18 Bass Fishing League Regional Championship on Lake Cherokee in Jefferson City, Tennessee, hosted by the Jefferson County Chamber of Commerce. Boaters will compete for a $60,000 prize package, including a new Phoenix 819 Pro bass boat with a 200-horsepower Mercury outboard and $10,000, while co-anglers will fish for a new 18-foot Phoenix bass boat with a 200-horsepower outboard.