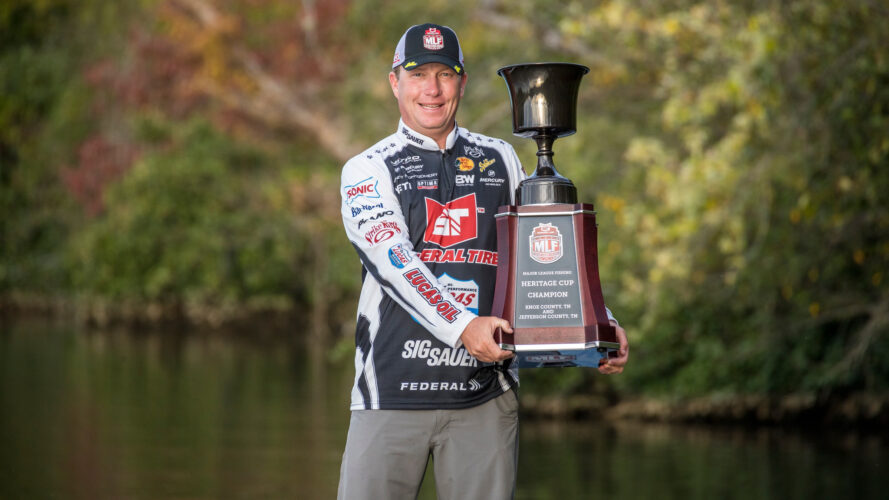 KNOXVILLE, Tenn. – Blacksburg, South Carolina, pro Andy Montgomery has been the model of consistency. In 17 career Major League Fishing Cup events, Montgomery made it to the Championship Round nine times, finishing second and third numerous times, but still searching for that elusive first win. Finally, on Tennessee’s Fort Loudoun Lake, Montgomery got it done.

In an episode that premiered Saturday on the Outdoor Channel and Monday on the MyOutdoorTV app, Montgomery caught nine bass weighing 16 pounds, 10 ounces, to win the 2022 Academy Sports + Outdoors Heritage Cup Presented by Magellan Outdoors in Knoxville, Tennessee, and earn the first MLF Cup Championship of his career.

“We put so much into this, and I’ve been close so many times,” an emotional Montgomery said in his post-game interview. “I knew it was going to happen eventually, I just wanted it to happen a couple of years ago.

“I don’t know what it is about Fort Loudoun Lake, but I just jive with it,” the South Carolina pro continued. “I love fishing here, and I knew I was going to have a chance. I hate to get emotional, but I’m so happy that I finally won one.”

Montgomery landed a couple of bass in the first period that had him near the top of the leaderboard, then pulled away in the Period 2 with five bass to take a commanding lead. He caught the majority of his fish fishing docks with a ½-ounce blue craw-colored Strike King Thunder Cricket with a Strike King Rage Bug trailer.

“I used the Rage Bug because I was skipping so much – that bait skips really good – and I was also fishing wood, and it keeps it from hanging up,” Montgomery said. “One of the keys for me this week, though, was my line. I threw Strike King Contra fluorocarbon, and it was critical. I have confidence in that line, and I knew that it was not going to break off.”

Overall, there were 40 bass weighing 63 pounds, 11 ounces caught by the final eight pros during the Championship Round of competition on the upper reaches of Fort Loudoun Lake.

The 2022 Academy Sports + Outdoors Heritage Cup Presented by Magellan Outdoors was hosted by the Visit Knoxville Sports Commission and Jefferson County, Tennessee and premiered on the Outdoor Channel as six, two-hour original episodes each Saturday afternoon debuting on Feb. 12, 2022, and running through March 19, 2022.

The event was shot over six days in October in Knoxville and featured 24 MLF pro anglers visiting the Knoxville area to compete on Douglas Lake and different zones of Fort Loudoun Lake on each day of competition. The locations were unknown to the anglers – they did not learn where they were competing until they arrived to the launch ramp each morning of competition.