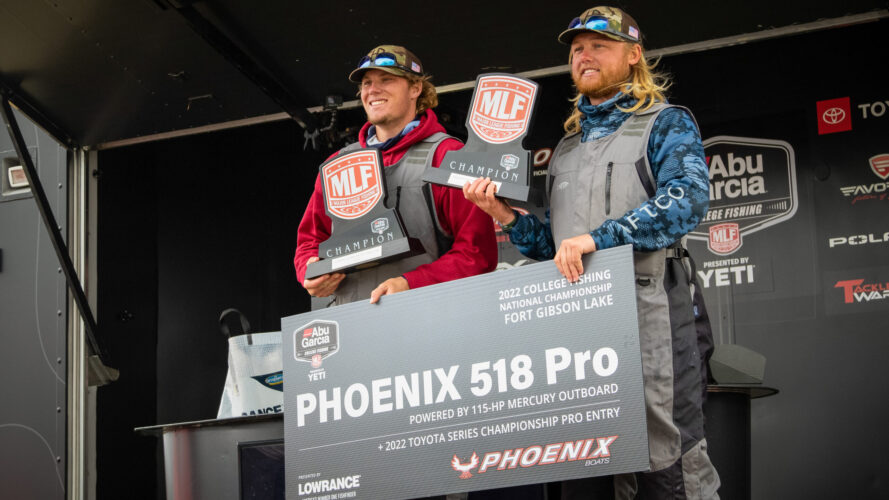 Although ETBU has a Tackle Warehouse School of the Year title under its belt, this is the first national title for the university, earning the team a $33,500 prize package, including a new Phoenix 518 Pro bass boat with a 115-horsepower Mercury outboard and automatic entry into the 2022 Toyota Series Championship to compete as pros for a shot to win up to $235,000.

After leading on both Day One and Day Two by a mere ounce, the Tiger duo’s three-day total of 14 bass, weighing 43-8 gave them the win by a 3-pound, 5-ounce margin – the largest margin they’ve had throughout the entire event. Donavan Carson and Landon Lawson from King University finished second with 13 bass weighing 40-3.

“We both went into this week knowing if we put our heads down and fished hard, we could win this event,” Proffitt said. “We knew logically if we could catch 15 3-pounders, we could win the tournament – and we’ve caught a million 3-pounders in our lives, so how difficult could it be to catch 15 – that was our mindset going into this event.

“We had zero fish at 10:30 a.m. today and we knew realistically we could zero for the day – it’s a fine line that we were walking this week. There are so few fish, and the bites are so few and far between, if you miss one, you’ve changed the entire result of the event. Thankfully it all worked out for us this week.”

“Some of our fish came off spots that we had actually fished in July during another MLF tournament,” Ragsdale said. “We pulled up in that same area and caught our kicker fish there, so we definitely feel blessed.

“We just fished slow. We ran and ran, but every spot we put down, we fished slow and methodical and made sure that every place where a fish could possibly be, we put a bait in.”

Proffitt said they caught their fish between 2 and 6 feet of water throughout the event and their key bait on Championship Thursday was a jig.

“We caught fish on a ChatterBait and on a crankbait, but the jig was what we caught the two big ones on and that was really key for us, just slowing down, especially earlier in the event,” Proffitt said. “There were a lot of people fishing the same areas as us, and we weren’t doing anything ‘special’ as far as where we were fishing, but I think the difference was we were just settling down once we got in an area and just made sure we fished it real slow. We made sure we made every cast we could possibly make, from every angle we could possibly hit it from, then we’d move on. And we hit as many spots as we could doing that.”

When asked about the automatic berth into the 2022 Toyota Series Championship, Proffitt said, “I can’t even process what that means right now. I’ve always wanted to fish for a living, and I can’t imagine a better way to possibly get started.”

“This National Championship win is insane for our program – it’s going to be awesome.”

Overall, there were 26 bass weighing 72 pounds even caught by nine teams Thursday. The catch included one that was a five-bass limit.

The Abu Garcia College Fishing Presented by YETI National Championship Presented by Lowrance at Fort Gibson Lake was hosted by the Wagoner Area Chamber of Commerce and the City of Wagoner.