Canadian pro steams ahead on the Harris Chain 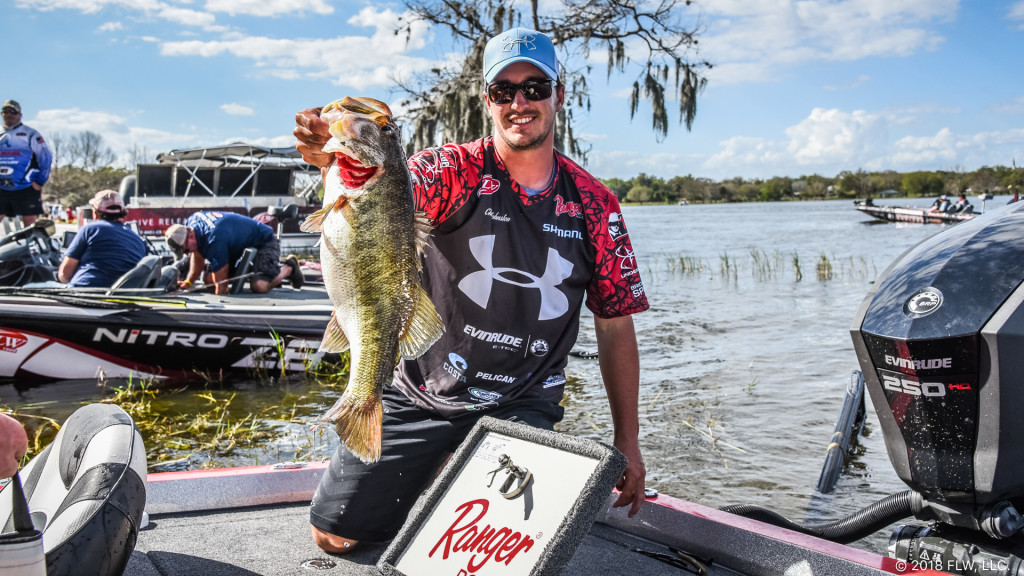 It didn’t take long for Chris Johnston to get the action started during day two of the FLW Tour event presented by Lowrance on the Harris Chain this morning. Nor did it take long for him to rile up the weigh-in crowd. Johnston was one of the first to cross the stage, dropping more than 25 pounds in the weigh basket to take the lead with a two-day total of 45 pounds, 4 ounces.

Yesterday, Johnston went to Griffin in the morning and caught three of his five keepers there, then finished in Harris. With an early check-in time today, he figured he’d be better off avoiding lost time in the lock and staying in Harris, which is the lake where the field takes off from each morning.

“It started right off the bat this morning,” he says. “I went to the spot where I finished yesterday.”

Shortly after takeoff Johnston hooked a tiny bass – we’re talking 4 inches. As he was winding it in, the bass suddenly started fighting back and ducked under the boat. Johnston called for the net, just in case, and when his co-angler dipped the net into the lake he came back up with a 6-pounder.

“The 6-pounder ate the small bass and the bait,” Johnston says. “They were both in the net, so that was crazy.”

Crazy, maybe, but definitely a good omen, as Johnston quickly landed a limit of bass. 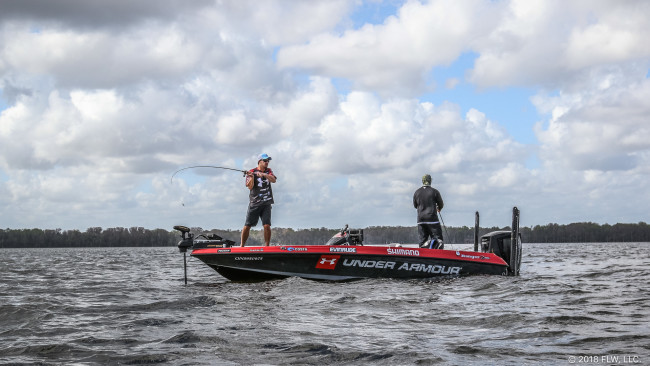 His strategy was to park his Ranger on a 300-yard-long stretch of 12-foot-deep hydrilla packed with shad and pick it apart with a reaction bait.

“It’s definitely key to get them early in the hydrilla,” he says. “I think there’s a little bit of a shad spawn in the morning.

“I’m fishing a main-lake weed edge. There’s a little bit of an indentation in it, and there’s some wind blowing into it. I just hit the Spot-Lock [on the Minn Kota Ultrex] and sat there.”

Johnston caught about 30 bass without moving the boat. That was partly based on playing defense to keep other anglers off, and partly because he was dialed in on an isolated group of fish. He’s hoping this weekend he’ll be able to work up and down the edge more to try and locate more groups of fish.

Most of his action came on one bait, which he declined to name, but he did make a big upgrade in the hydrilla at 9:30 with a key bait switch.

It was 10:30 until Johnston finally pulled the plug on his honey hole. He spent the rest of the day running some old water and hunting for a bonus kicker, which he got in the form of a 4-pounder that let him cull up to his final weight.

Though Johnston wound up catching nearly 50 fish today, and he had the early flurry of action, he says success isn’t guaranteed with his pattern.

“Fishing this hydrilla is frustrating,” Johnston adds, “because you can go a long time without many bites. The fish are grouped up.”

Friday he’ll lead the top 30 pros out into Harris for day three. The top 10 pros after tomorrow’s weigh-in will qualify to fish the final round on Saturday.