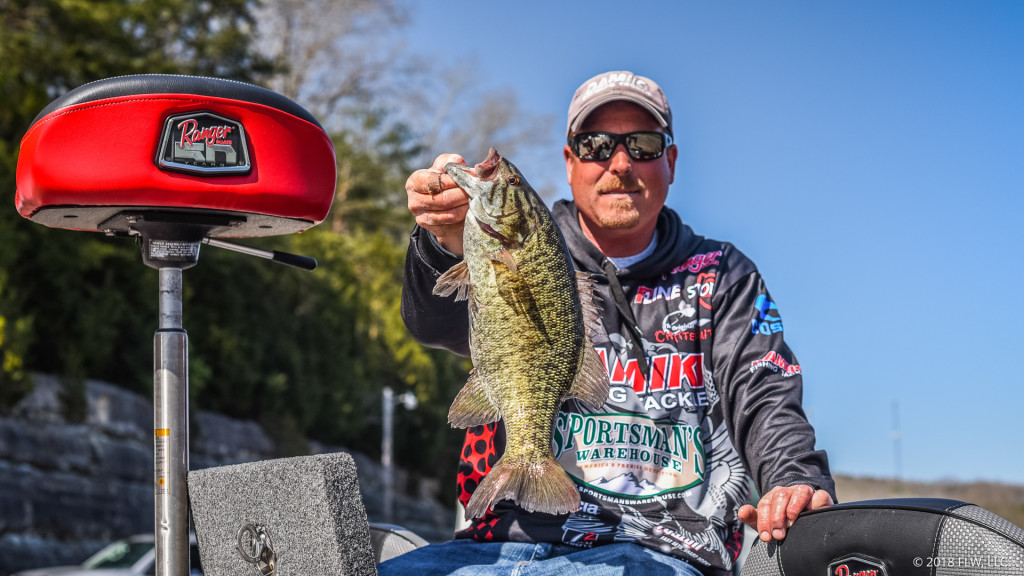 Predicting who will win the FLW Tour event on Lake Cumberland is a long shot at best, but it’s certain that all the contestants are bringing more fish to the weigh-ins than last year.

As part of a program to determine the impact of tournaments on the fishery, the Kentucky Department of Fish and Wildlife Resources has temporarily imposed a 12-inch minimum size limit on largemouths and smallmouths during the Lake Cumberland event. Since 2001, the minimum size limit for largemouths there has been 15 inches, and 18 inches for smallmouths. The five-fish daily limit remains the same.

“People should be aware that the 12-inch size limit is only for the anglers fishing in the tournament; it’s not lake-wide,” notes Marcy Anderson, fisheries program coordinator for Kentucky’s Southeastern Fishery District. “The temporary lowering of the size limit is part of a three-year study that is just getting started this year.

“Tournaments are good for the area, and we get several requests for lower size limits,” she continues. “But we don’t have any information on how the lower size limits could impact the lake, so as part of the study, we will look at two spring and two fall tournaments on Lake Cumberland and also Cave Run Lake. We will be monitoring fish mortality during the [Tour] tournament and for one week following the release of the fish. We’ll do that by going to each release site and carefully surveying the area.”

Anderson adds that the standard size limits will apply June through September, when fish mortality due to catch and weather-related stress can be higher.

Waiving minimum size limits or slot limits for major tournaments is nothing new anywhere, and their impact on the final results varies. Whether it’s 15 inches or 18 inches, any tournament size limit is applied equally and theoretically affects the weights of everyone fishing. However, at least one pragmatic Tour veteran regards the reduced size limit for the Cumberland tournament as a boon. Barry Wilson thinks that a number of anglers might have earned bigger checks at the Cumberland River fishery in 2017 had they been able to add what were then undersized bass to their catch.

“Last year a lot of guys would have been grateful if the limit on smallmouths was just 17 inches. They were turning loose three or four limits a day of 17-inch fish – I know; I was one of them,” says the Alabama pro, who placed second in the tournament behind winner Scott Martin by less than 2 pounds. The size limit on Cumberland’s smallmouths led Wilson to alter his game plan midway through last year’s tournament.

“The first two days I was going strictly after smallmouths and was catching a keeper a day,” continues Wilson. “I had one that I just couldn’t get to measure [18 inches], but I weighed it [in the boat] anyway. It was 4-1. It was so disheartening to turn back fish like that. So I switched over to largemouths, with the 15-inch size limit. Then I was catching 3 1/2- to 5-pound largemouths, which was a lot better than throwing back 3- and 4-pound smallmouths.”

A non-angler who’s also happy about the temporary change is Bill Taylor, FLW’s senior director of tournament operations, though more so for the sake of the competitors and the community.

“The 18-inch size limit doesn’t really reflect the number of smallmouths in Cumberland,” he says. “I had lots of fishermen come up to me [last year] and tell me about all the 16 1/2- to 17 1/2-inch smallmouths they caught and let go. You’re talking about a bass that’s around a 3-pound-plus average. That’s a good tournament-size fish that anglers depend on for better finishes.”

In the 2017 event on Lake Cumberland, 227 limits were caught in four days of fishing – albeit by a descending number of anglers in the semifinal and championship rounds. On day one of the 2018 FLW Tour event 145 pros managed a limit.

At any tournament, it’s not so much how many fish are caught and released as how many survive the shock of being caught, transported and weighed. In that regard, Taylor isn’t worried about what the delayed mortality study at Cumberland will show.

“At FLW, we’re proud of our catch-and-release record,” says Taylor. “On average, 98.3 percent of the bass brought to our weigh-ins are released alive and in good health – that’s any season, any tournament. The equipment we use to keep bass alive once they’re brought to the weigh-ins is first-rate, and the procedures we follow were developed over long years of fish care.

“In this particular tournament, because of the changes to the size limits, there’s going to be a lot more limit stringers,” adds Taylor. “So that’s going to make the weigh-ins a whole lot more exciting. More important to the community and to Kentucky, it’s going to showcase Lake Cumberland as a world-class smallmouth destination.”