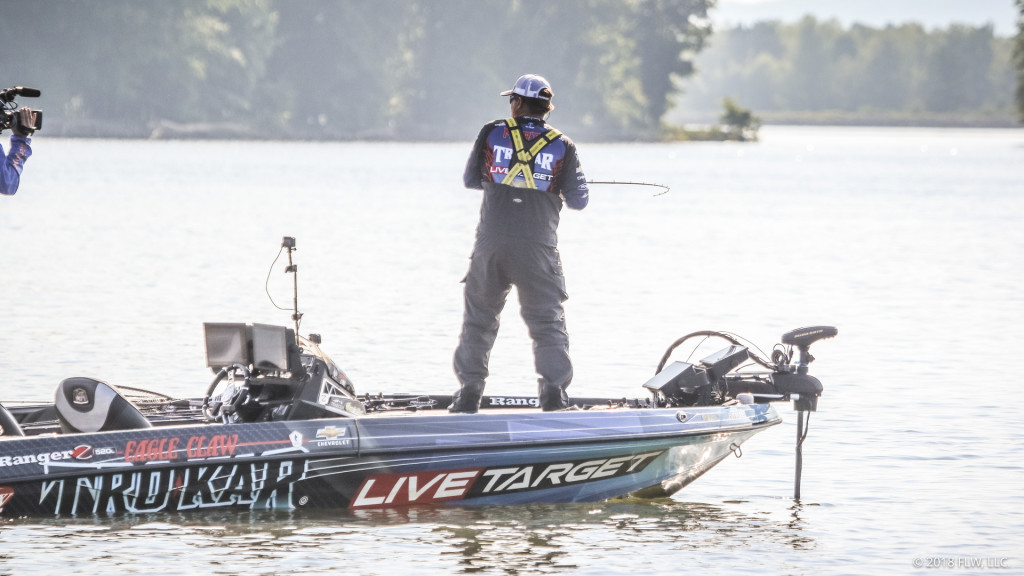 At the day-three weigh-in for the FLW Tour event presented by Costa Sunglasses on Kentucky Lake, Scott Martin joked that FLW ought to give Jason Lambert the winner’s trophy and create a second trophy for the rest of the finalists who are basically competing to “win” second place. Martin was kidding, but he’s kind of right. Lambert is so far ahead – more than 19 pounds ahead of Martin in second place – that the win is basically already his. The rest of the top 10 will be competing for pride and to maximize their paychecks.

Here’s how the top five made the cut. 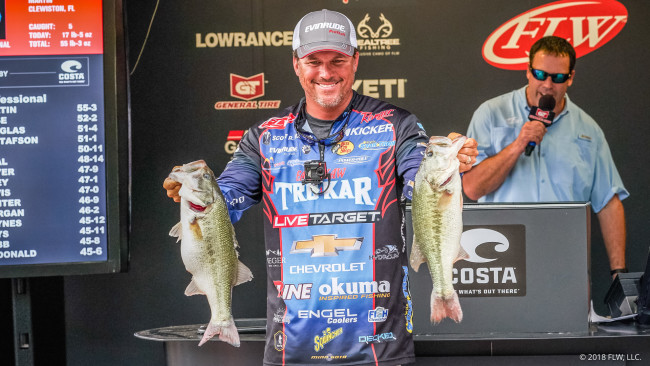 This morning, Martin ran 80 miles south to a shallow spot where he caught them yesterday and found that a local angler who was competing in a club tournament was already there. Martin says it was a total coincidence, and the angler obviously knew of the spot from before and didn’t know Martin was going to be fishing there. The angler gave Martin the spot after reporting that he had caught about 30 pounds already this morning. An observer who jump-started the local’s boat got a peek in the livewell and verified that the fish were all 6-pound-class bass.

“I’m not complaining at all. It’s just one of those things,” says Martin. “What are the odds?”

The second unfortunate event was when Martin hooked into a 5-pounder that appeared to be cooperative enough to make it into the net. As Martin worked it to the boat, the bait, along with a white bass that it was hooked to, unexpectedly popped out of the mouth of the bass. Martin had actually set the hook into the white bass when it was inside the greedy largemouth’s jaw, which prevented him from sticking the big girl well enough to land her.

Despite the setbacks, Martin weighed in 17 pounds, 5 ounces. He has high hopes for tomorrow.

“I think I can get a few bites there in the morning if it’s open. Then I’ll go to a couple other spots nearby. I don’t have a lot of spots. I have an area with four or five places. I’m just kind of rotating them. Because I’m going so far south, I can’t really run around very far because there’s not enough time. I think I could catch a 25-pound bag tomorrow.”

Most of Martin’s key places are one-cast spots that require him to carefully line up to hit the juice just right. He’s been fishing a LIVETARGET crankbait, a hair jig and a finesse worm, but today switched to a Carolina-rigged creature bait made by a new company called Googan Baits. 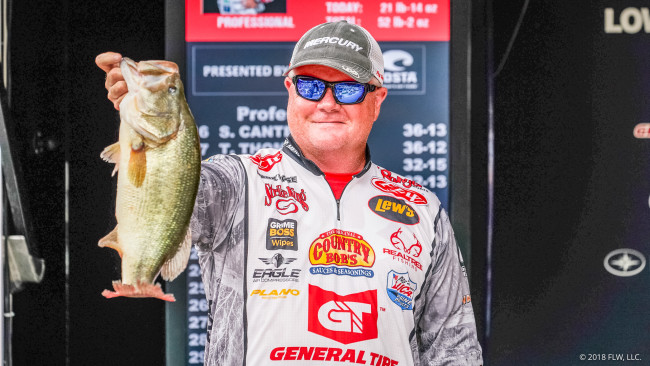 Pennzoil Marine Angler of the Year leader Mark Rose was pretty blue on Thursday afternoon, after weighing in just four bass for 12 pounds, 5 ounces. It looked as if his AOY dreams were toast.

“That day I had 12 pounds, I told a lot of people that, leading the AOY race, there’s no lake I’d rather be on than Kentucky Lake,” says Rose. “Well, after three days of practice and a day of fishing, I’d have rather been anywhere else.

“I let the carp intimidate me. In practice, I saw all the carp on all my places, so I went shallower, and they [the bass] weren’t there.”

Rose realized after day one that he needed to buckle down, say a prayer and just return to his ledge-fishing roots. He started graphing deeper ledges and eventually got back on track in some areas that are about 24 to 25 feet deep. He’s using a worm, swimbait, crankbait and jig. A couple of ledge flurries this morning and some other bass throughout the day added up to 15 to 20 keepers for Rose.

“I only fished probably five places that had fish on them,” he says about his Saturday outing. “I’m idling a lot of places just like everyone else.” 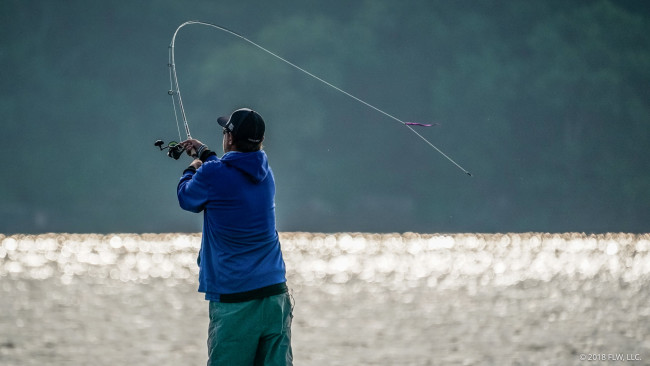 A single spot on a ledge near Paris Landing has carried Minnesota’s Josh Douglas into the final day. The spot has been pounded, and today Douglas weighed in 14 pounds, 2 ounces for his smallest catch of the week.

Douglas says he had some back-up spots in mind for the weekend, but encountered boat traffic on those spots and was unable to catch any off them. Fishing pressure from locals is also a factor on his primary spot, which is a community hole area.

“When I got there, there was a club derby out of Paris, and there were a couple boats on it,” he says. “They were pretty cool and left it, but they’d already been there an hour or hour and a half.”

Douglas caught two quickly on a drop-shot. After he ran the back-up spots, he returned and scraped together three more drop-shot bass. 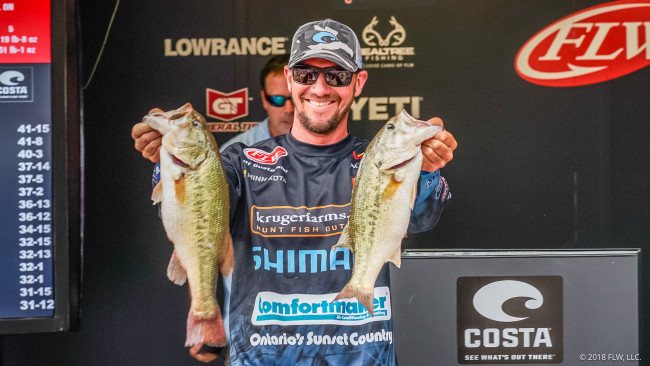 Smallmouth expert Jeff Gustafson isn’t relying specifically on brown bass this week, but he is relying on his experiences chasing smallies offshore in Canada and the Upper Midwest to stay on the trail of Kentucky Lake’s ledge dwellers.

Today, he weighed his best limit of the tournament – 19 pounds, 8 ounces.

“Any of these places we go, I’m all about fishing offshore, out deep,” Gustafson says. “And I’ve done that all week. I had a flurry on my second spot and got a limit. Then I think I caught two fish in six or seven hours. On the way back in I hit a deep spot that I fished a few years ago, and I caught a 5-pounder.”

Gustafson has spent most of the tournament in the Big Sandy area in Paris. The fish are on the move, and he’s had to make some adjustments throughout the week by moving out onto the main lake. His baits this week include a jig, bucktail and Jerky J, which he nicknamed “the Lambert.”

“I’ve got one spot that’s carried me the last two days, and if they’re there tomorrow I’ll do OK. If not, I’ll go looking. I’m just happy to be fishing the final day. I could’ve finished 50th and been ecstatic as tough as it’s been.”