The Canadian side of the lake was key 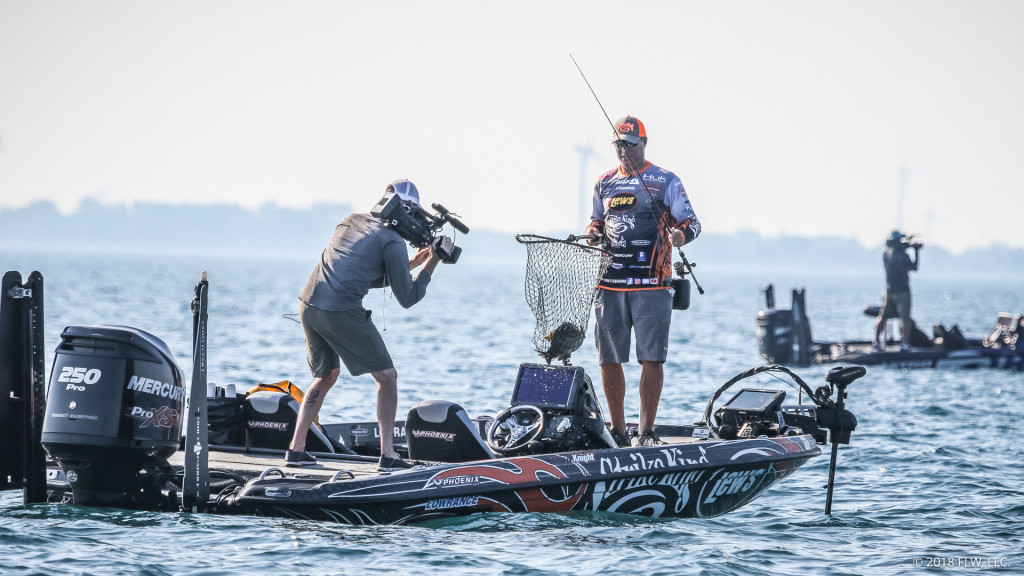 If you didn’t know before, you certainly know now – Lake St. Clair is one of the best fisheries in the country.

Even pros who “struggled” were catching 18 pounds of smallmouth a day, and the FLW Tour event presented by Mercury rewrote records for total weights. And again, this was all with smallmouth; not largemouth.

While Chad Grigsby boater over 97 pounds of smallies for the victory, the top 10 anglers behind all kept him honest in a variety of ways. 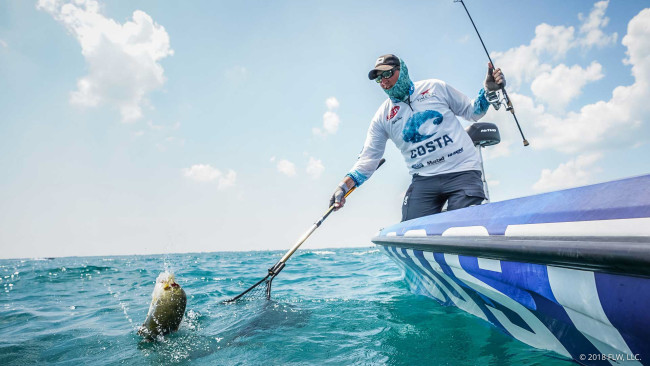 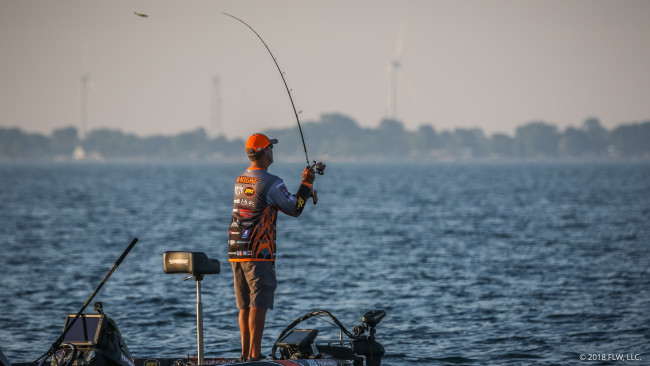 If either had the area to himself, maybe he could’ve won. Yet, despite sharing the same area and sometimes fishing within 30 yards of one another, both Dylan Hays and Brad Knight still felt they both had the bites to win. That’s how good their area was.

“If you look at my and Dylan’s fish, and our co-anglers, you’re looking at almost 300 pounds of bass being weighed from that area,” Knight says. “And that doesn’t include all the ones we threw back.”

Fishing within earshot of Grigsby on the southern Canadian side, the two had a few hundred-yard area with a magic combination of sand, patches of weeds and a lot of bait. How they went about fishing there, though, differed ever so slightly.

For Hays, he did the majority of his damage dragging a Z-Man Finesse TRD on a mushroom head from Mustad.

For Knight, it was a  Strike King 3X ElaZtech Z Too Soft Jerkbait on a drop-shot with a 3/8-ounce weight.

Regardless of the technique, the two would drift around until they found small schools.

“When you would hit a school, it was like ledge fishing,” Knight says. “You’d quickly cast back on the same spot and catch a few more. Everything tended to come in flurries.”

Unfortunately for both on Sunday, those flurries lacked the quality that had the previous days. Knight had the first flurry, which included a 5-pounder, but that’d be the only big one he’d catch all day. Meanwhile, Hays caught 4-pounder after 4-pounder for a while, never being able to truly cull up enough to hold off Grigsby. 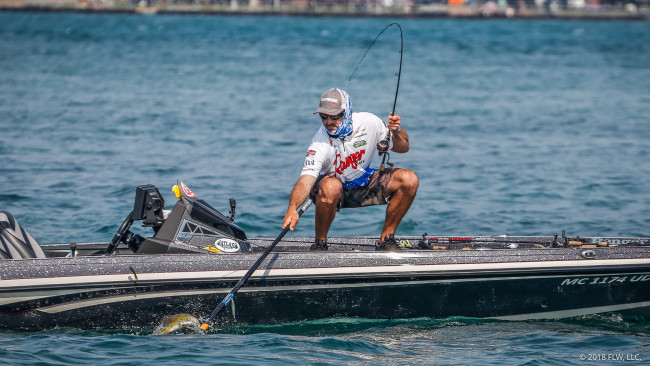 Scott Dobson was the odds-on favorite heading into the event, and the local didn’t disappoint. He caught 22-23 pounds each of the first three days in the St. Clair River, which was exactly what he planned to do to be in contention. The only problem was that the main lake was pumping out 25-pound limits.

Dobson is known for his prowess in the river, and he stuck to his strengths throughout the event.

Each day he had a milk run of shallow, current-related spots. Some were in 5 feet of water; some as deep as 11 feet, with each having some sort of depression or high spot that created an eddy where smallmouth could sit and ambush prey as it passed by.

As regimented as his daily run was, so was his bait selection.

“Every spot was the same,” Dobson says. “I throw a big swimbait, then a small swimbait, a jerkbait and then a drop-shot. If they didn’t eat all that, I left.” 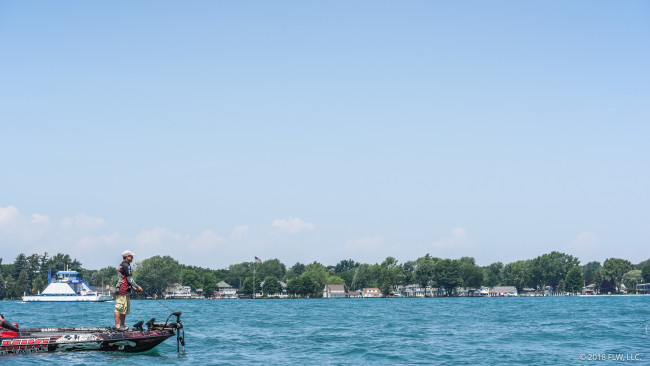 Trying to figure out what Bryan Thrift’s pattern is on any given fishery is basically impossible because the pattern usually only exists to him. The one constant is usually he’ll run-and-gun a lot, and he’ll be using a Damiki Stinger.

Sure enough, that’s what he did at St. Clair.

“I basically did a circle around the whole lake,” Thrift says.

He’d start every day around where the middle and southern channels of the St. Clair River meet. From there, he’d run into a shallow flat in Anchor Bay and then around the Canadian side, stopping on as many as a dozen places. The first two days, the slick-calm conditions allowed him to run plenty, but come the weekend, increased wind and boat traffic limited how many spots he could hit.

His spots ranged in depth from 5 feet to 18, with one constant being grass. Regardless of the spot, Thrift dragged around a 4-inch Damiki Stinger on a ¼-ounce jighead. 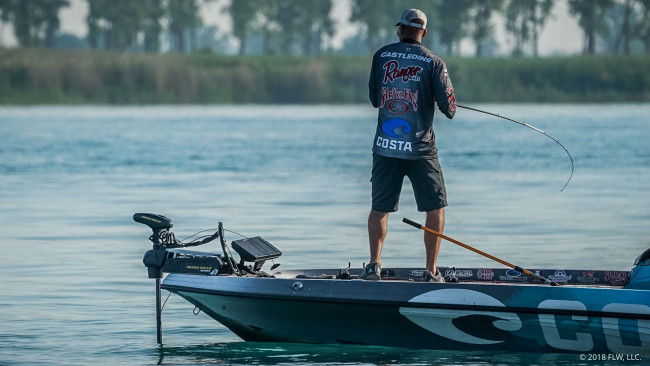 There are a few lakes back home in Texas where Todd Castledine has caught some smallmouth, but like everyone else, he’s never experienced anything like he did this week.

Yet, while many pros were catching dozens of fish a day, Castledine took a page from another St. Clair gamefish.

“It was like muskie fishing for me; the fish of 10,000 casts,” says Castledine, who capped his rookie season with his first Tour top 10. “I was only maybe catching 10 fish a day. On Saturday I only caught seven, but they were all the right ones.”

Being a power fisherman who loves grass, the closest thing that “made sense” to him were the isolated grass patches he found on the St. Clair Flats. Every day he spent the majority of his time in 3-4 feet of water, trolling motor on high or drifting. Because of the vast size of the flats, he hit new water every day.

“I think I could fish there the next few weeks and still not have hit it all,” Castledine says.

His one tool of choice was to swim a Strike King Rage Swimmer on a 3/8-ounce Strike King Squadron Head. Unfortunately, he didn’t have many of those jigheads, which became a problem when he connected with an actual muskie.

“I saw a muskie just lying there and was trying to show my co-angler,” Castledine says. “So I flipped my swimbait near it to point it out. Well it ate it, and I had to spend 20 minutes fighting it to try and get my jig back because it was my last one.” 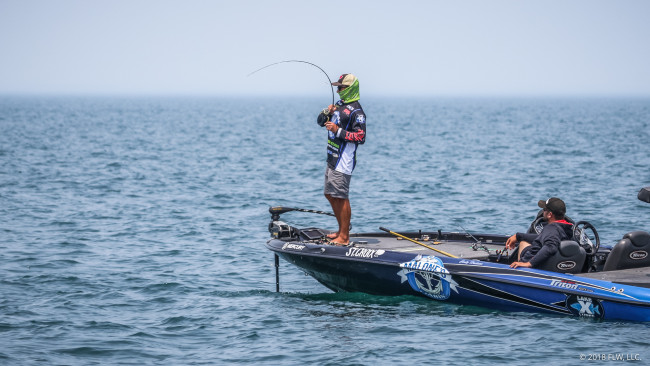 Cody Hahner needed a top 10 finish to punch his ticket to the Forrest Wood Cup in his rookie season. That’s exactly what he did.

While Hahner loves fishing for smallies back in Wisconsin, he’d never been to St. Clair before or fished for them like he did here, saying he prefers to have “something to look at.”

Still, he was able to adapt by fishing tall patches of grass 16 feet deep in the northeast corner of the Canadian side. Fellow top 10 angler Joey Cifuentes was also fishing the same general area.

The first two days Hahner caught his fish on a drop-shot with a Big Bite Baits Jerk Minnow and 3/8-ounce weight if there was a little chop, but when it slicked out he went with a Duo Realis Spinbait, which produced some of his bigger fish.

Unfortunately, that area seemed to wane on day three, forcing him to move to the Belle River Hump. There he targeted veins of sand in amongst the patches of grass with the drop-shot. 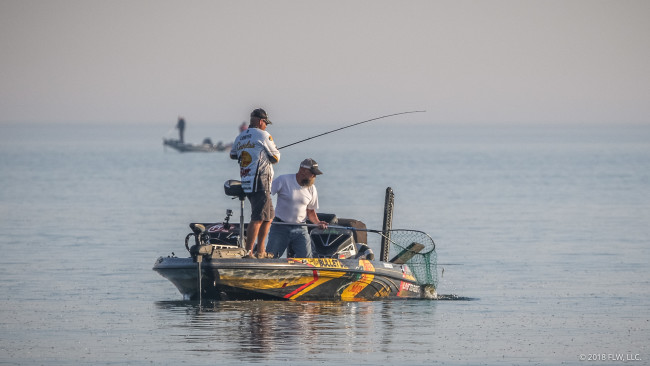 8. Lawyer learns as he goes

Before Jeremy Lawyer came to St. Clair, a friend from back home gave him a waypoint. So, the first day of practice he checked it out.

“It was 5 miles from the bank,” Lawyer says. “I thought surely this is not right.”

So, Lawyer went to the bank and caught some small fish. On day two, however, he went back out deep on the southern shore of the Canadian side.

Lawyer’s area turned out to be a popular spot, with numerous top-30 anglers fishing the stretch on the southern Canadian side. Despite admittedly not knowing what he was doing, Lawyer did the best thanks to slowly dragging a pair of two-pronged approaches.

The first was a drop-shot – a “power” version on a baitcasting rod rigged with a  Zoom Salty Super Fluke and a finesse version with a Zoom Fluke Stick. The other tactic was a tube – one was a slim finesse version and the other a beefier version. 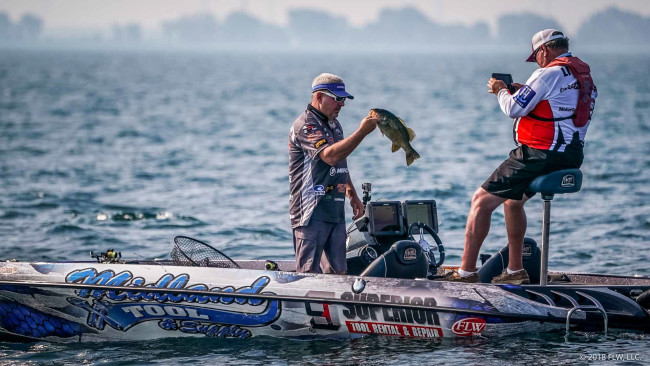 After day one it seemed the Belle River Hump may be the place to be, as both Ryan Chandler and Darrell Robertson were in the top five and fishing there. While it didn’t end up sustaining that first-day optimism, Chandler still was able to make his first top 10 thanks to a smallmouth staple – a tube.

“I mainly used a  Poor Boy’s Tube in mango magic on a ¼-ounce head,” says Chandler, who also mixed in a drop-shot with a Yamamoto Shad Shape Worm. “The key was I was snapping it. I was trying to get a reaction bite.”

That reaction bite proved key on day three. A slow start actually saw both he and Robertson abandon the area, yet Chandler eventually returned and prompted a few big ones to bite.

As for the area itself, Chandler says what appealed to him was the water clarity and the overwhelming amount of bait and fish activity in the area. That could be witnessed as both he and Robertson put on a show each day weeding through perch and eater walleyes to catch some big smallies. 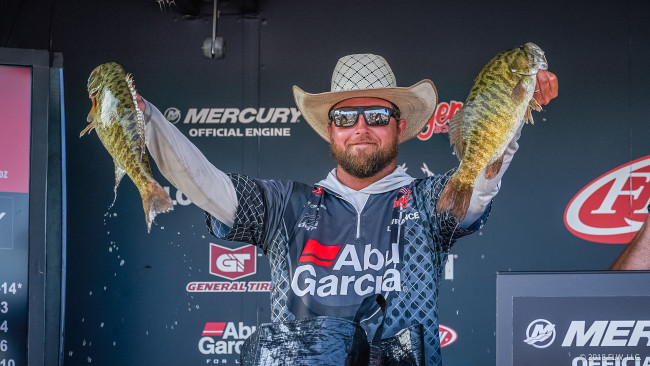 As stated earlier, Joey Cifuentes and Hahner were basically sharing the same section of water in the northeast corner of the Canadian side. And also like Hahner, Cifuentes had a small backup plan that proved to be key.

“I caught the majority of my fish on the Canadian side,” says Cifuentes, “but I also had a little spot just outside takeoff where I caught a good one on day two and filled my limit with 10 minutes to go on day three.”

Cifuentes’ main area was a 100-yard stretch where he noticed the bottom dipped from 15 to 16 feet in amongst scattered weed patches.

In there he caught the majority of his fish dragging a Big Bite Baits Jerk Minnow on a ¼-ounce drop-shot, but his bigger bites came slowly swimming a Duo Realis Spinbait just above the weed tops. He threw both on 6-pound test Sunline Super FC Sniper Fluorocarbon, rigged up on an Abu Garcia Revo Premier spinning reel and new Denali Myriad Series rod