The 2018 Forrest Wood Cup is underway in Hot Springs 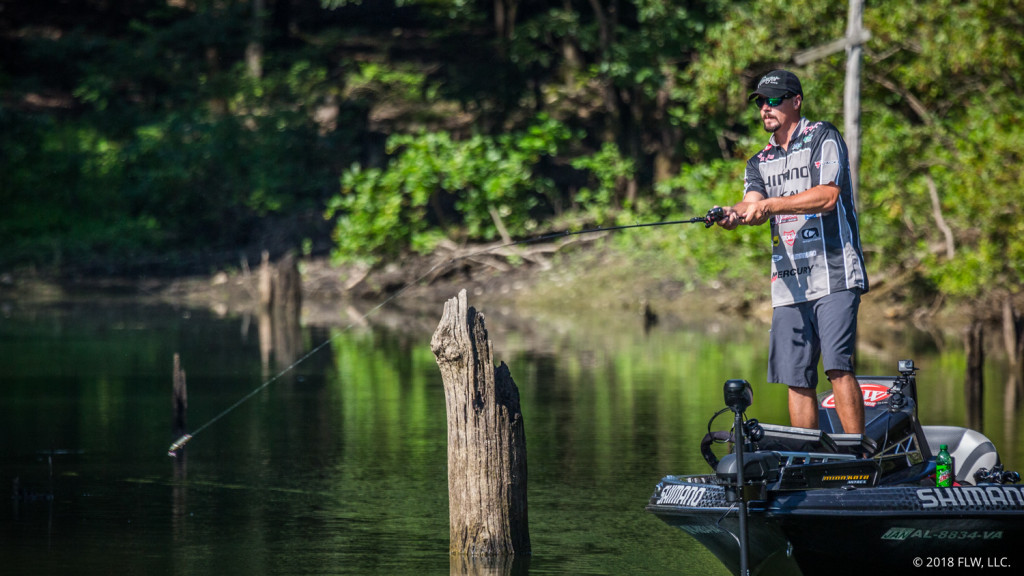 Everything you need to know about the Cup – click here

Cory Johnston has knotted this thing all up. Depending on how big his two "little ones" are, he might be pushing 14 pounds, which is what we estimated for leader Nick LeBrun. We unofficial have him at 13 1/2, but Johnston is claiming he only has 12 to 12 1/2. He might be doing the usual pro sandbagging.

Zack Birge also jumped back into this with a 4 3/4-pound fish that boosted him clear to 11 3/4 total. One more fish like that and he'll be right there nipping at LeBrun's heels.

If you want to see how this thing shakes out, you'll have to log on at 5 p.m. CT and watch the weigh-in at FLW Live because that's it for the day 1 coverage blog.

Thanks for following along.

As pros continue to chip away at their limits fish by fish, a logjam has developed in the middle of the standings. Right now, only 3 pounds separate sixth place from 21st according to our unofficial standings. Mark Rose recently checked in with a small limit, bringing the total number of limits to 15. Several pros are still looking for No. 1. Yeah, it's been that tough.

The first flight will check in at Brady Mountain at 4 p.m. CT. We'll make one final blog post at 3 p.m. You can watch the weigh-in live at 5 p.m. on FLWFishing.com. 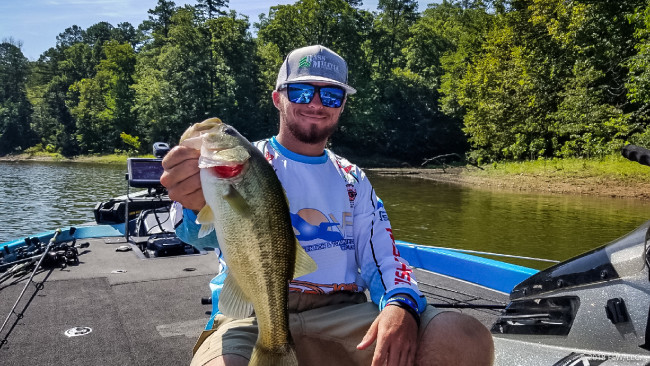 The heat and lack of wind are doing their part to make fishing tough once again on Ouachita. Water temperature is exceeding 90 degrees and it looks like the brief respite from the heat caused by mid-week rain is in the rear-view. This is August fishing at its finest.

The overwhelming pattern for anglers looking to upgrade is burning topwaters along banks in shallow water. Many expected the rain to improve the shallow bite for the tournament, but if conditions stay like this, it's not likely we'll see a lot of quantity in the hunt for quality fish.

The leaderboard remains mostly unchanged. Most of the top 10 is searching for kickers. Only Bradford Beavers (5th) and Scott Martin (10th) are still hunting for a limit. Meanwhile, Nick LeBrun, Cory Johnston and Sheldon Collings are the only anglers with unofficial weights over 10 pounds.

Canadian pro Cory Johnston is the third pro to cross into double-digits. A 2 1/4-pounder boosted him up to 11 1/2 pounds total, and into second place. He trails only Nick LeBrun at 14 pounds and is a pound up on Sheldon Collings. Of course, these are all estimated weights.

Topwater is still the deal right now, along with Carolina rigging and some finesse tactics. It's certainly not a barn burner, but the fishing is also pretty consistent, with reports coming in every five minutes or so. The best way to see the full rundown of fish catches is to click on the live leaderboard link at the top. Or click here. 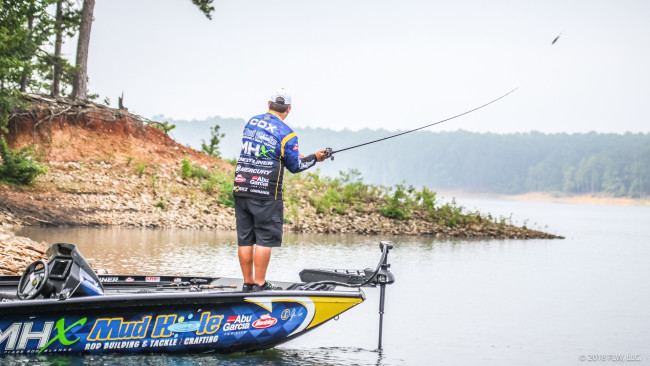 Here's the unofficial top 10. They still have a few hours to fish. 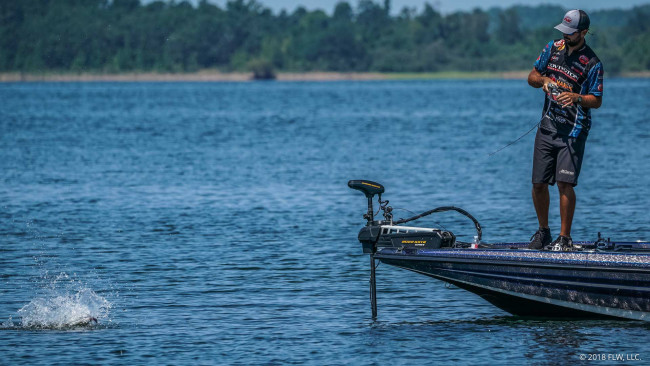 An early morning flurry of activity gave way to a bit of a slower period before heating up again around 11:00 when Cody Hahner landed a 5-plus-pounder, followed closely by Bradford Beavers with a 6-pounder around 11:30. Big fish haven't been all that common so far, but we've seen plenty in the 2-pounder range and several limits, almost all under 10 pounds.

The big story of the day has been Nick LeBrun, who has spent some time culling already and currently has an estimated limit of 14 pounds. John Cox, the 2016 Cup champion, currently sits in second place with a limit of 9 1/2 pounds. Four anglers in the top 10 haven't caught a limit yet, so there's some potential for a lot of late movement in the standings.

Ouachita is a tough lake in August, as the Cup competitors have been quick to point out this week. Still, it's surprising to see the likes of Andy Morgan, Chris Johnston and Clark Wendlandt completely striking out today. None of the three have caught a keeper and Scott Canterbury and JT Kenney have only one each.

The Cup might still be won in deep water and on grass and brush, but the shallow bite looks to be the deal at the moment.

The shallow topwater bite still looks to be the key early on in the tournament, despite LeBrun finding some good ones fishing offshore grass.

Clark Wendlandt hasn't found any success so far, much to his disappointment.

"The worst thing about it is I thought I was gonna do really good," he said.

The same thing holds true for JT Kenney and Andy Morgan. Kenney only has one fish in the box, a 1 1/4-pounder. Morgan has come up empty all day, as has Johnny McCombs.

David Williams, on the other hand, has been finding them; he's just struggling to catch them. He has a limit in the box for 6 1/2 pounds, but he's lost four including a good one. 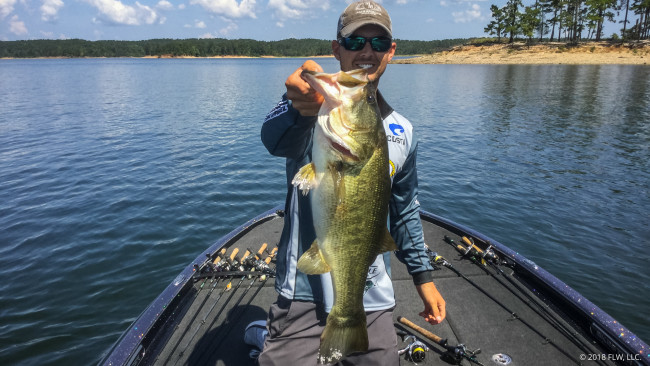 Bradford Beavers made a huge leap up the leaderboard with a 6-pounder now in the box. He has two for about 7 pounds.

Ouachita hasn't been setting up to supply many fish of the 5-plus-pound variety, but maybe that's all changing. Beavers and Hahner have broken the ice. 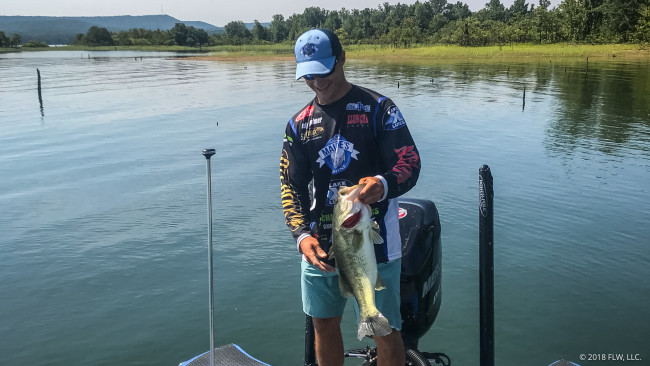 Cody Hahner needed only one fish to make a big move up on day one at Ouachita. The Wisconsin pro wrestled in a 5-pounder that jumped about four times before he finally played it down by the back deck and was able to lip it into the boat. He adds it to a 2 1/2 caught previously.

Hahner just moved into the top 10 with that catch. 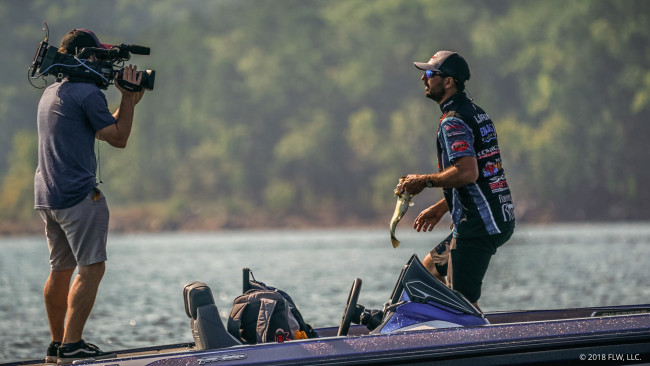 The action has steadied up over the last hour or so, as pros are starting to dial in on better quality fish. It seems the midday bite is hottest for quality, but the morning bite is the way to sack up numbers.

Austin Wilson has already culled. He's part of a logjam of pros in the 7- to 8-pound range trailing All-American champ Nick LeBrun.

LeBrun is continuing with his offshore pattern, but overall the top 10 are split pretty evenly between fishing topwater shallow and fishing offshore, with maybe a slight edge going to the shallow guys. 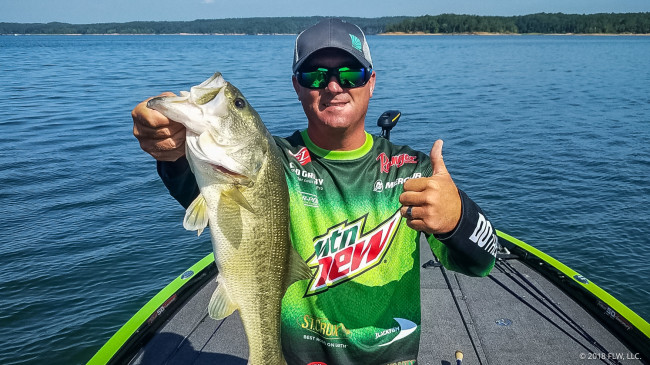 The fog has finally burnt off for good, and the big girls are starting to show themselves on Lake Ouachita. Cory Johnston just landed a tank. It's probalbly a 3 1/4. Chad Grigsby caught one of similar size. Jason Lambert added a 2 1/2 and another small keeper. He's working toward a top-10 weight with a limit in the box. Clent Davis also boxed a 3 3/4.

Interestingly, the field is spread out from one end of Ouachita to the other. And the fish catches are coming in from all corners of the reservoir. It doesn't look like one area will dominate like has been the case in Cups in the past.

We'd no more than typed out the previous post when another Nick LeBrun update came in. He added No. 4 to the livewell. It's a 2 1/2-pounder to bring him up to 11 1/2. LeBrun is fishing a big worm and a wobble head on a shallow ridge.

Watch out for the All-American champ. He's a hammer, and he's looking for major victory No. 2 for 2018.

Austin Wilson, the TBF champion from California, just checked in with a five-bass limit worth 8 pounds. That has him unofficially tied with Zack Birge for second place behind Nick LeBrun.

Most of the field is still chucking various topwaters along the bank. That's by far the most popular pattern. Other patterns in play include dragging and cranking deep water, and throwing under-spins for schooling fish or fish suspended around timber.

Zack Birge is one of the favorites this week at Lake Ouachita, and he's showing why this morning. Birge is the first one to lock down a limit on day one. His five will go about 8 pounds. He's catching them on a small swimbait.

There's been a little bit of a traffic jam on some key areas up the South Fork. Mark Rose started the day close to Jason Lambert and Justin Atkins. Then he shared water with Randy Haynes. And now he and Scott Martin are fishing close to one another. It's all friendly right now, but fishing that close is challenging when the schools are small and the Cup is at stake.

There' still some lingering fog out there that ought to extend the morning bite. Otherwise, it's humid, warm and building toward hot. 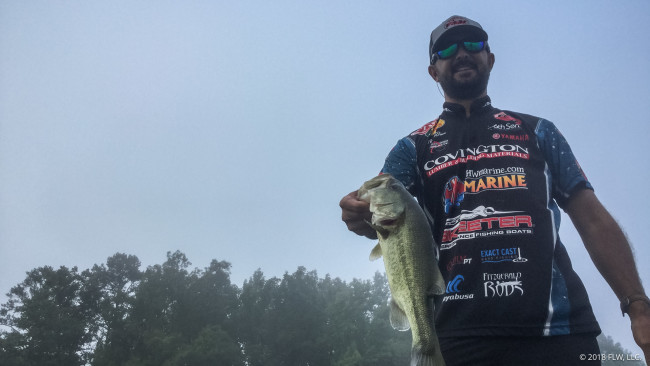 So far, Nick LeBrun is still the far-and-away early leader. His three keepers will go about 9 pounds. Zack Birge has four keepers, but none of any size. His will go about 7 pounds. John Cox has three keepers, including a 3 1/2. Plus, he dumped a 4-pounder. That would've gone a long way in this derby. Cox was pretty pumped at takeoff this morning. He figured out a little deal on the last day of practice that had him thinking about a second Cup.

The reports fell off in the last half-hour or so. That's kind of what we expected. Most of the pros were going to run some type of morning pattern, maybe schoolers or brush piles, and then swap to their main pattern for the rest of the day. If running the bank with topwater is the preferred midday pattern, then the fishing won't be fast and furious. That's one of those a-bite-here-a-bite-there patterns. 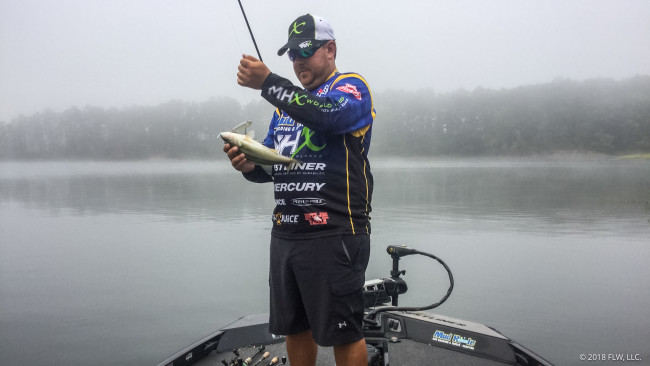 There's been a nonstop stream of updates all morning here at Lake Ouachita. The fish are absolutely chomping. Most of them are in the 1 1/2- to 2-pound range, but a handful of 3-pounders have been caught too.

The western end of the lake is pretty foggy, but that hasn't stopped a few of the guys from spotting schoolers and casting to them to get the morning started. The more popular pattern, however, has been to hug the bank and sling a buzzbait or Whopper Plopper.

About 10 boats ran up the Ouachita River. In the south fork, there's a ledge-fishing party going on with Mark Rose, Jason Lambert and Justin Atkins. Lambert and Atkins have each landed a decent keeper.

The early leader is Nick LeBrun, who popped three keepers early for about 9 pounds. 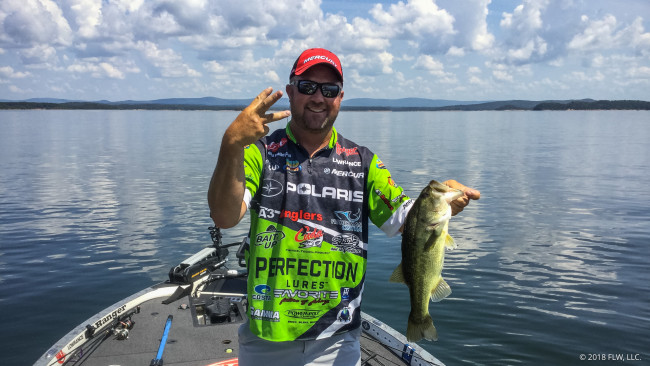 The FLW Live cameras are rolling this morning on Lake Ouachita. We're broadcasting from the boats of Zack Birge, David Dudley, Mark Rose, Justin Atkins and Scott Martin. The cameras will shift around once the action starts heating up. 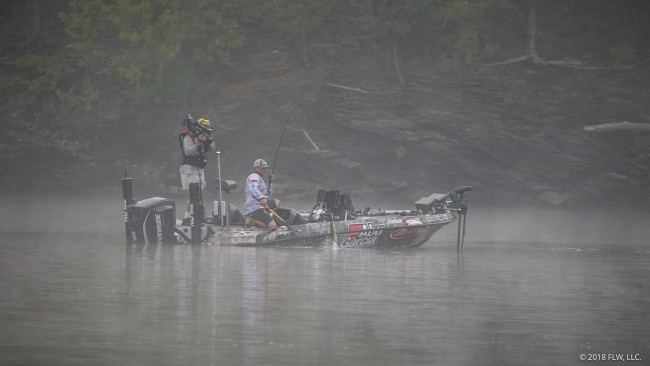 The 2018 Forrest Wood Cup officially kicked off at 7 a.m. from Brady Mountain on Lake Ouachita. Fifty-five pros* launched their boats this morning, and a couple hundred fans greeted them at the General Tire takeoff ramp. Those pros will compete for the next two days to try and earn a shot at Sunday's top-10 round and stay in contention for the $300,000 first-place prize.

Friday morning at Lake Ouachita dawned humid and warm, with some lingering cloud cover following a rainy Thursday. The lake is as slick as glass. Pros will have an easy run to their first spots this morning.

Right now, it's tough to predict what kind of fishing to expect. Fish are deep, shallow, in grass, around timber, in brush, on ledges and points, and pretty much everywhere in between. Most of the pros have been singing the blues throughout practice, but a few came clean yesterday at the Forrest Wood Cup pre-tournament banquet and admitted they'd found some quality fish. Expect to see pretty decent weights to start this thing off, as the sandbaggers are revealed.

As always, you can stay tuned to this blog to follow along with all the coverage. We also encourage you to watch the action unfold on FLW Live, or to stop by the Hot Springs Convention Center for the Cup expo, which runs from 10 a.m. to 4:30 p.m. each day. Weigh-in at Bank OZK Arena starts at 5 p.m.

*Larry Stoafer, the Kansas pro, did not fish on day one due a health emergency. He has not withdrawn from the tournament and hopes to fish on day two. His day-one weight is zero.

Wind: light to nil from the west