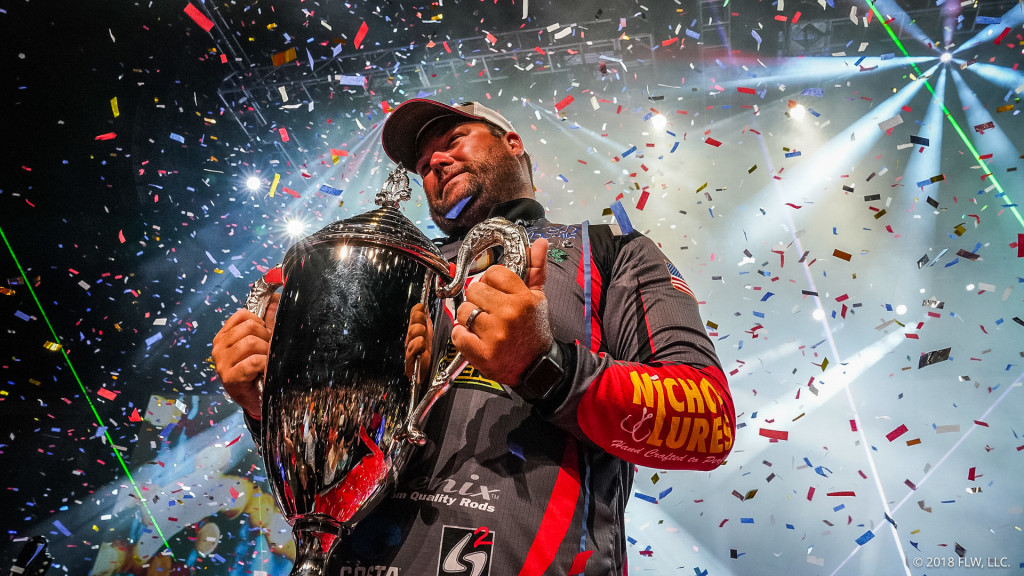 Little less than a year ago Clent Davis was contemplating giving up the sport of professional bass fishing for good. Now, he’s the Forrest Wood Cup champion.

“I don’t even know what to do or what I’m feeling,” a stunned Davis said on stage after day-two leader Wes Logan lifted his hand to show he had only one fish in his bag. “This is incredible.”

Davis’ run to becoming Cup champion started last November when FLW Senior Director of Tournament Operations Bill Taylor called Davis about returning to the Tour after being on the Bassmaster Elite Series the previous two seasons. Admittedly, Davis was burnt out on the sport, but the itch came back after that call.

Fast-forward to the Cup, and Davis knew there was only one way he was going to have a chance to win.

“I’m a decent offshore fisherman, but I think I’m a really good brush pile fisherman,” Davis says. “So that was the only thing I was going to do since day one.”

Unfortunately, his strength didn’t seem to translate to results early on, as he struggled throughout practice and even into the first morning of the tournament. While he’d sampled brush piles all over the lake, with most full of fish, Davis could only get bit in a small section on the southwest end of the lake.

“I don’t know what it was about that section other than I could get bit there and not anywhere else,” Davis says.

However, with all his eggs in one basket, Davis just stuck with his pattern, running dozens of brush piles in 22 to 30 feet. On those piles he tossed one of two baits he learned about years ago from one of the best on Ouachita.

“My first event as a co-angler in 2010 I drew Scott Suggs,” Davis says. “I got a good lesson. I have no clue where we fished. I just understood he threw a big worm and a swimbait.”

Davis’ big worm was a Mister Twister Mag 12 BUZZ Worm in plum apple on a 1/2-ounce head. He dragged the worm over the limbs of the brush. Most of his bites came right after he’d pull it over a limb and let it fall.

His swimbait was a hollow-belly model, which he’d count down to just above the brush – sometimes the brush topped out 15 feet down, sometimes as shallow as 5 feet below the surface. He also mixed in a Yo-Zuri 3DR Series Pencil topwater when fish came up schooling over the brush.

Eventually, his hard-headedness began to pay off as he ground out matching limits of 9 pounds, 8 ounces each of the first two days, which got him into the top 10 by 1 ounce.

With nothing to lose today, Davis says he just had fun. Of course, he had no idea just how much fun he’d have. Davis got off to a fast start and quickly took over when he backed up a 2 1/2-pound fish with a 5-pounder (caught on the worm) and another 2 1/2. Another two keepers had him easily in the lead, and a 4-pounder late in the day put it far out of reach.