Deep, shallow and a combination of both worked for the top 10 at the Cup 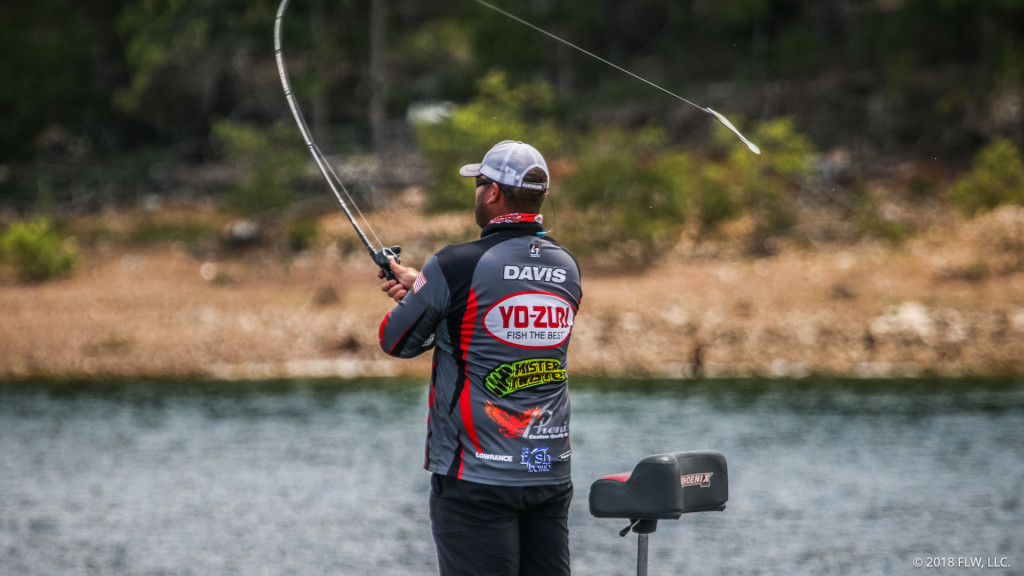 Most Forrest Wood Cup participants knew Lake Ouachita was going to be tough. Few realized just how tough. Catching a limit was a grind, even through the final day.

Yet, a number of pros – through solid patterning, hardheadedness or luck – managed to figure out Ouachita better than others, with none doing it better than winner Clent Davis, who spent all his time fishing brush piles out deep.

The rest of the top 10 fished a mixture of deep and shallow water to try to get enough bites each day to stay in contention. 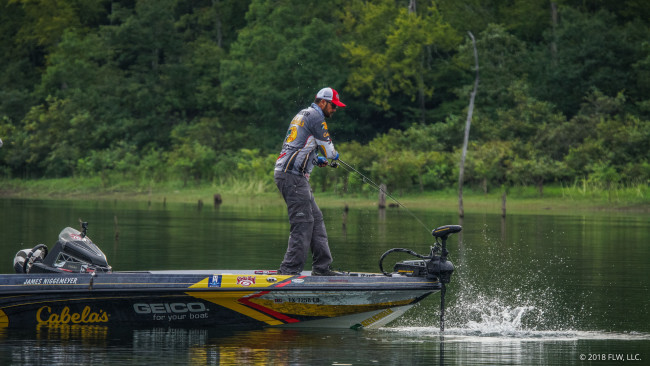 Every time James Niggemeyer thought he had something figured out, he realized he didn’t.

“It was just so random. I had to fish with an open mind the entire time and burn the bank.”

While he did most of his damage with a Strike King KVD Sexy Dawg and a buzzbait, Niggemeyer also caught a little magic with random schoolers that would come up at just the right moments to keep him going.

“I was really blessed this tournament,” Niggemeyer says. “I just turned my mind off and stayed on the trolling motor.” 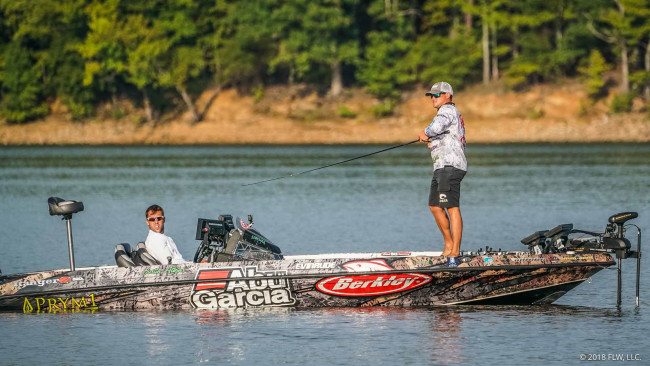 Justin Atkins felt after practice he had a real shot at being the first to win back-to-back Cups. Had he executed, he might have done it.

“I let one good one get away every day,” says Atkins, who weighed in 28 pounds, 12 ounces total. “To win these tournaments when you’re only getting a few bites a day, you have to land them all. Execution is everything, and I just didn’t execute.”

On day one he lost a 4-pounder that ate a flutter spoon he was ripping on some offshore humps in the south fork of the Ouachita River. That deep bite was Atkins’ main deal for catching limits each day on the spoon and a Berkley PowerBait Fatty Bottom Hopper Worm Neko rigged with a nail weight in one end.

His better bites all came shallow. Unfortunately, one of those better bites on day two was another 4-pounder he hooked on a frog and broke off.

On Sunday, Atkins switched up to a Berkley Choppo and had another giant eat it on a long cast. 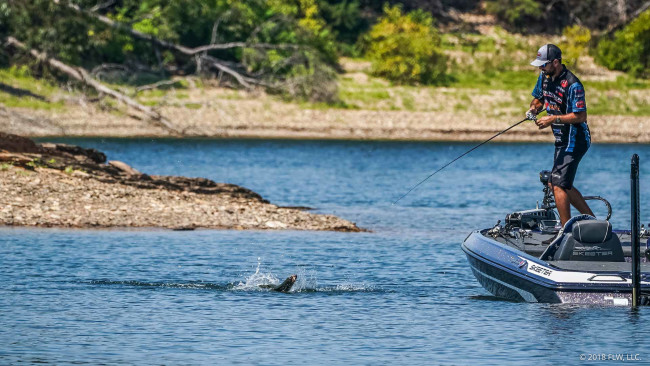 No one had more confidence in what he was doing after day one than Nick LeBrun – and for good reason.

The T-H Marine BFL All-American winner had executed his pattern excellently, targeting a lily pad patch in the back of Big Blakely Creek and working deep grass patches on offshore humps. He was actually done fishing by noon so he could save his stuff for day two. Unfortunately, there wasn’t much left to save.

LeBrun only brought in seven more fish over the final two days – three Saturday and four on Sunday – and if it hadn’t been for a random 6-pounder that came up chasing shad on day two, he might not have even made the top 10. His 13-pound, 5-ounce bag on day one accounted for nearly half of his 28-pound, 6-ounce total.

An 8-inch V&M Wild Thang worm in blue flex was LeBrun’s main bait throughout the event. He rigged it on a 1/2-ounce Elite Tungsten weight and a Hayabusa hook, dragging and swimming it through the vegetation. He also mixed in a V&M Flat Wild, a 6th Sense SplashBack popper and a plopper-style topwater throughout the event. 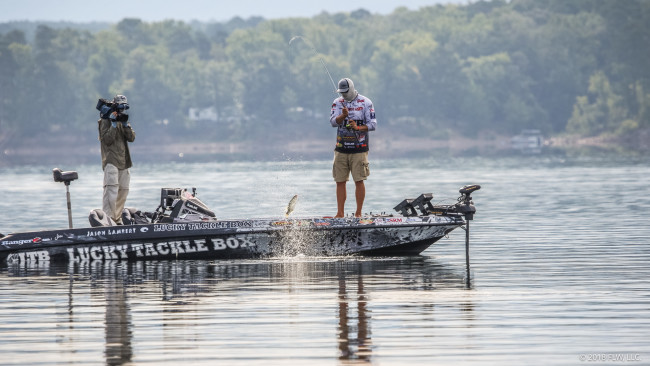 Jason Lambert is one of the best offshore anglers in the world, and he certainly did plenty of offshore fishing at Ouachita. On the final day, however, he swung for the fences and just never connected.

“I had felt I was fishing from behind, and I needed a big bite make anything happen,” says Lambert, who brought in 27 pounds, 15 ounces. “To do that, I figured I had to go shallow, so I made the choice to run shallow most of the day. It just didn’t happen.”

Prior to his shallow stint, Lambert spent the majority of his time fishing near Atkins on some offshore ledges in the South Fork of the Ouachita River.

“They were just old channel swings,” Lambert says. “There was brush on them, but that was just in the way. They were sitting on the flat parts in 14 to 17 feet.”

He caught 18 keepers out there the first day on a Roboworm Straight Tail Worm on a drop-shot. Unfortunately, the bite seemed to die as the tournament went on.

“I just couldn’t upgrade,” Lambert says. “I was just upgrading by ounces.”

Up shallow he tossed a River2Sea Whopper Plopper. 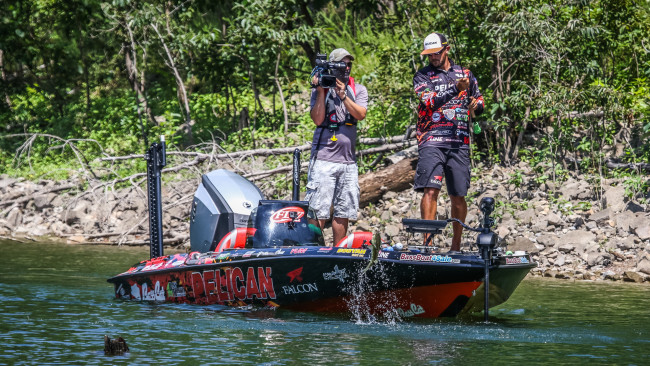 After three days on Ouachita, Zack Birge doesn’t want to make a cast for a month.

“I made so many casts this week, but that’s what you have to do here,” says Birge, who was one of only four pros to bring in a limit all three days. He had 26 pounds, 13 ounces total.

Like many, Birge committed himself up shallow. He used a YUM Tip Toad, rigged either weightless or on a buzzbait, reeling both as fast as he could to cover water.

“My trolling motor batteries are shot after this tournament,” Birge says.

Birge originally focused on three stretches around the Blakely creeks, but eventually no area showed to be better than the rest. The only consistent thing was keying in on short pockets close to the main river with flats in the back. If he saw it on his map, he ran over to fish it.

He also had a schooling spot the first morning where he caught some key fish, but by day two all those fish were gone. 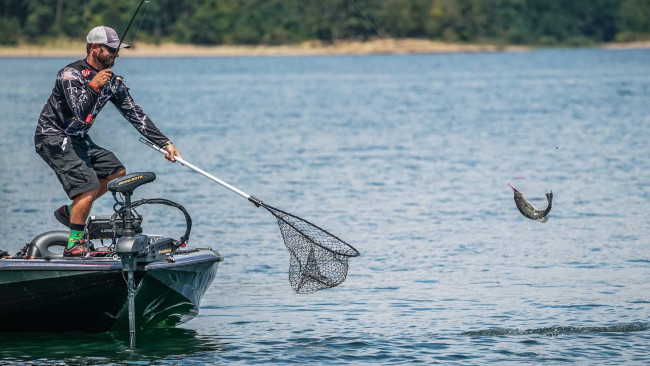 For two days, Wes Logan’s first Cup couldn’t have been going better. He found himself leading after day two, but it all fell apart on championship Sunday.

“My timing was off all day,” says the 24-year-old Tour rookie, who weighed in just one fish on day three to finish with 25 pounds, 9 ounces for the tournament.

Logan was running a two-pronged pattern both deep and shallow on the west end of the lake.

The deep spots were his most consistent, as he was hitting multiple points and humps in 17 to 25 feet of water with brush piles on them. He tossed a NetBait Contour Worm on a drop-shot, and he was able to pull multiple keepers each of the first two days from the cover, typically later in the day.

The shallow bite was simply a matter of putting the trolling motor on high and running any bank he saw with either a Brian’s Prop Bee or a Dirty Jigs Scott Canterbury Buzzbait.

“I got the vibe [on Sunday] it wasn’t going to be a good day when I had 12 pounds swim past me and then a pair of 5-pounders cruise right by me down the bank,” says Logan. “And when I had a bunch of schoolers come up all around me and I couldn’t catch one, I knew it probably wasn’t going to happen.” 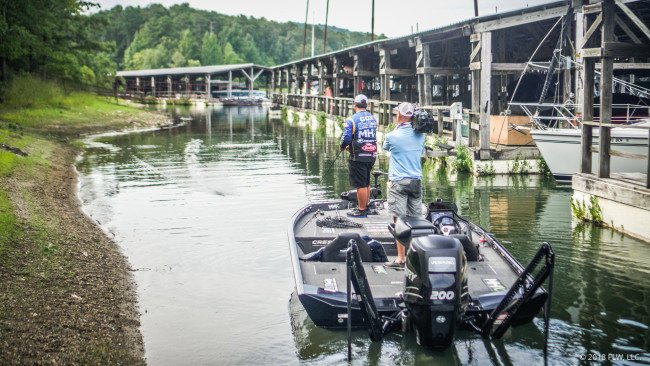 It should come as little surprise that John Cox spent all his time shallow, but at one point during practice he actually thought about screwing his transducer back on his boat so he could fish out deep.

He put the thought out of his mind on the final day when the shallow bite finally showed what it could produce. Cox caught nearly 20 pounds that day.

“After that I was committed shallow,” says the 2016 Cup winner.

From there, Cox simply put the trolling motor on high and bounced around the lake tossing a Berkley J-Walker and Berkley Choppo. While he was able to catch a limit the first day, Cox only caught four keepers each of the next two days, with his four fish on day three weighing a scant 4 pounds, 9 ounces. He finished with 24 pounds, 7 ounces total. 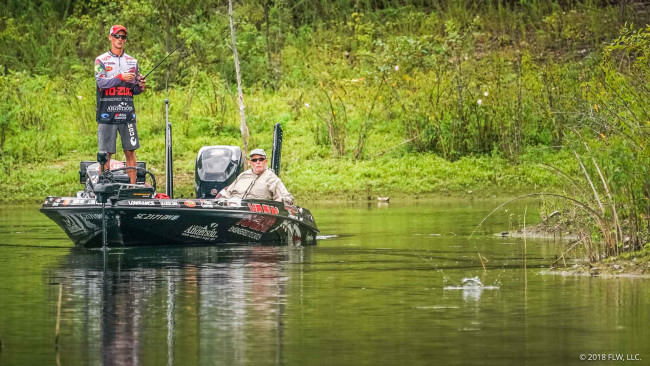 Brandon Cobb is probably going to win a Cup at some point. He’s certainly proven that he can put himself in position. Cobb made his fourth straight Cup top 10 this year.

“This is my dream tournament,” Cobb says. “I love fishing like this, getting one bite at a time. That’s all I thought about this week, just fishing to my strengths, burning my trolling motor up and focusing on catching just one at a time.”

Despite what seemed like ideal topwater conditions to start day three, Cobb managed only five bites all day and lost three of them.

“They kept biting the legs off my toad,” says Cobb, who finished with 23 pounds, 1 ounce total. 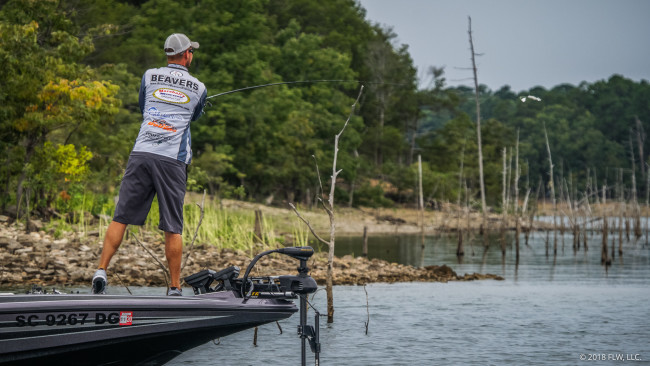 Bradford Beavers only caught one limit over his three days at Ouachita: a 7-pound, 15-ounce bag on day two. He nearly matched that weight in one fish on day one.

“If I don’t have that one 7 1/2-pounder, I only bring in two fish [one day one] and have nothing much,” says Beavers, who also brought in only one fish the final day and finished with 20 pounds, 8 ounces.

In a tough tournament, even a random giant can be worth a lot of money, and it certainly was for Beavers. The fish came on a 1/2-ounce Treeshaker Buzz Toad, but based on his lack of fish weighed in, it’s clear he was never on a truly solid pattern.

Beavers figures he hit upward of 70 spots a day, constantly running new water, “hoping to run into them.”

Along with the buzzbait, Beavers alternated between a handful of walking baits up shallow. On the deeper stuff he threw a drop-shot with a Roboworm Straight Tail Worm.