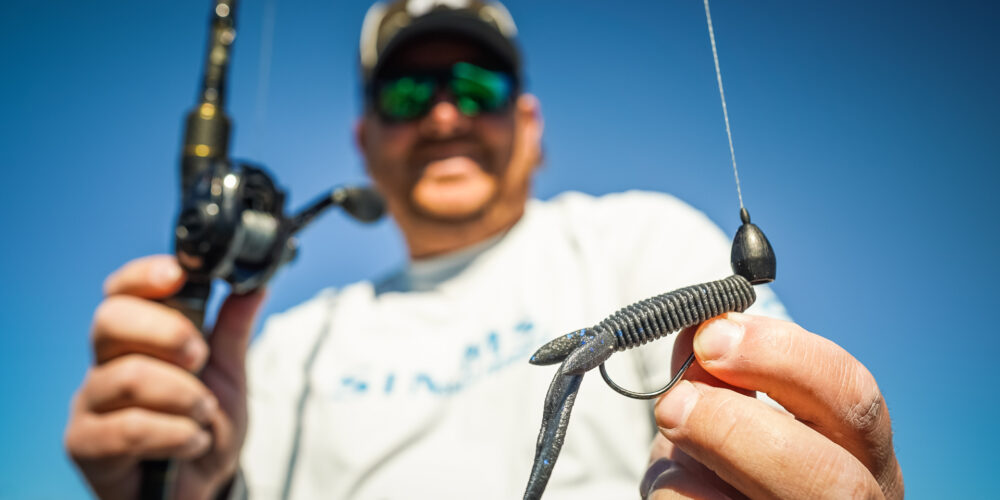 While John Cox might seem to some observers to have a very simple approach to bass fishing, he’s actually one of the best at refining various techniques, particularly when they fall into his shallow-water wheelhouse.

His approach to punching grass mats, for instance, is a model for how to efficiently get more bites in the thickest cover and successfully haul more bass out of it. From each tackle component to every procedure, Cox is dialed in on the mat-punching game.

Mat punching requires some of the most specialized equipment in bass fishing, and each component must be carefully considered and matched to the rest to increase the odds of successfully landing fish in heavy cover.

To some degree, tackle selection is a matter of personal preference. Cox’s system is borne of a lifetime of fishing in grass-choked Florida lakes. This is what works for him.

Cox fishes an Abu Garcia REVO X Inshore baitcaster and advises anglers to buck the current trend of using the highest-speed reels on the market. He sticks with a 7.3:1 retrieve ratio.

“The reason you want a little bit slower reel ratio, I think, is because it gives you power for when you have that fish on,” he explains. “You get more turns on the handle instead of having to pull with the rod.”

Cox’s Abu Garcia Fantasista Premier rod is 7 feet, 6 inches long and rated heavy power, which is about typical for a punching stick (though maybe a tad short for some pros). Its moderate-fast action strays a bit from the traditional “broomstick” standard but is along the lines of the modern trend in punching rods. The action complements low-stretch braided line and is carefully selected to deal with a bass that buries up in the grass once hooked.

“You want something that has a lot of bend but has enough backbone so when you really get to leaning into it, it loads almost all the way to the reel,” Cox says. “You almost have them on a big rubber band. You want them to be able to pull that rod to that point so it won’t rip the hook out, but you almost have the maximum amount of pressure on them.”

Keeping the pressure on, but still allowing the fish to surge prevents the bass from working a hole in its mouth when it’s pinned up against the mat.

Since Cox signed with the Pure Fishing pro staff, he’s been expanding his knowledge of braided line. Just like there are different classes of fluorocarbon suited for different techniques, he’s also learned when to apply various types of braid.

Generally, the more strands, the rounder and smoother the resulting braided line, which is great for long casts and techniques where a more supple line is important. In other words, not punching.

“That’s something I learned in the last couple years,” Cox says. “Berkley’s X5, which has four strands wrapped around one, is thinner in diameter and more sensitive, to me, than an eight-carrier, or something that’s smoother. It’s not as smooth as an eight. It’s a little more rigid, but it feels like it has a lot more cutting power. It seems like when that fish moves it actually cuts a lot better through the vegetation. It’ll open up more, and the fish will come out, and you can get it. That’s compared to fluorocarbon or a slick eight-carrier. To me, it’s night and day. That smoother line doesn’t cut. It won’t be able to rip through it.”

Cox believes the braid with fewer strands is more sensitive, which is much more critical when punching than when throwing a topwater or moving bait – tactics that would be better suited for an eight-carrier braid.

“You’ll feel stuff under that mat,” he adds. “Bass do this thing where they’ll come up with their mouth closed and brush the bait, almost not wanting to eat it, but to come up and see what it is. You’ll feel that with the four-carrier and not with the eight. It’s night-and-day to me.”

“The smaller the braid you can get away with, the better the cutting power you have,” he says.

Cox prefers a 3/0 Berkley Fusion19 Heavy Cover straight-shank hook for most plastics, including the Berkley PowerBait MaxScent Creature Hawg and Berkley PowerBait Chigger Bug, two of his current favorites. The hook is compact for slipping through the mat and has a light-wire shank for easy penetration, which is important when using a moderate-fast rod, but it can hold up to hard pulling and heavy pressure.

He opts not to use a snell knot.

The only other tweak he makes is to add a little JB Weld or epoxy to the keeper to help hold it in place on the hook for longer life.

Proper gear only gets you so far. Punching bass out of mats takes careful technique, too.

“I never want the rod up there at 10, 11 or 12 o’clock while I’m flipping it through the mat,” Cox says. “I always want the rod straight out in front at about 3 o’clock. From 3 o’clock, you have a lot more driving power to drive the hook in.”

It’s important to let the bait fall straight through the mat. Some anglers feather out line on the pitch so the bait can fall through unimpeded, but that technique can impart slack in the line or result in a high rod tip. Cox leaves the spool disengaged and makes sure his weight is heavy enough to pull line off the spool as the bait sinks.

“Your best chance to get them out of that stuff is to catch them off guard and try to pull them through the same hole your bait went through before they get 5 or 6 feet away,” Cox says. “If he swims away you won’t get a good hookset.”

Bring it up – A good hookset drives the hook in and turns the fish to start bringing it toward the surface. Ideally, the fish will wallow up through the mat. If it does, keep the rod loaded and haul it across the surface with the reel.

“That’s when the right rod comes into play is when that fish is out of the mat, he’s out of the water, and there’s not all that water resistance on him,” Cox says. “If he’s flopping everywhere and that rod is too stiff he’s going to come off.”

Read a buried fish – Whether or not to go into a mat to get a fish really depends on whether or not it’s actually buried. According to Cox, if you pull back and there’s very little movement from the fish – maybe just a slight tug or the feeling of it thrashing under the mat – and you can’t move it, it’s probably buried. Troll in and get it. But if the fish is pulling down or to the side (he says sometimes you’ll hear the line whizzing), it’s not buried, and there’s a good chance he’s going to come through the mat.

If you’re set up properly and have a good hook in him, maintain pressure and the fish should work up through the mat.

In either situation, avoid slack, keep the rod loaded and the pressure on, and rely on your gear. If you use Cox’s system, the odds are as high as they can be of getting that fish through the mat and landing it.