Braxton Setzer is leading the pack on day three 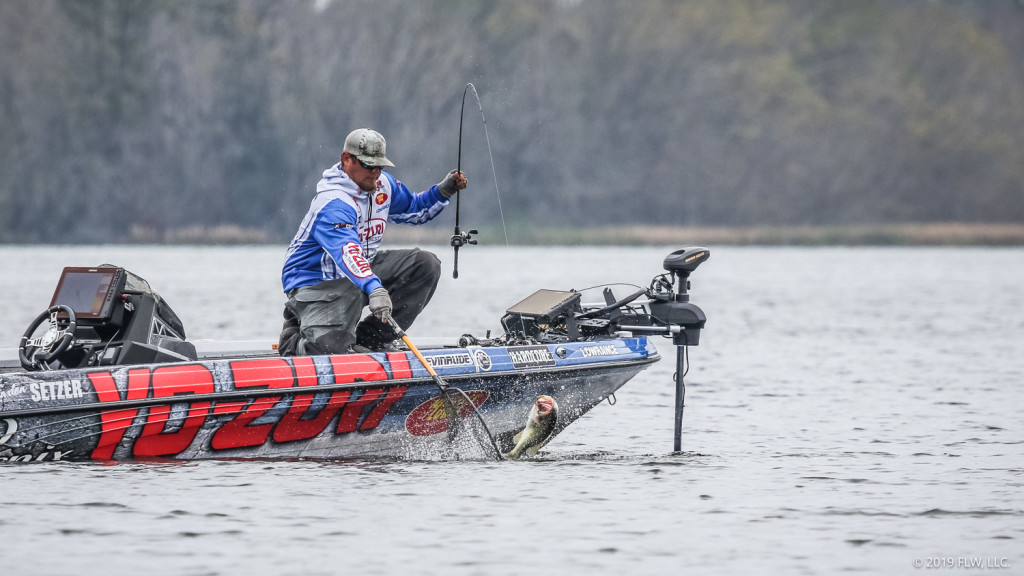 The top 30 pros have little more than an hour to scrape up whatever they can to bring to today’s weigh-in at 4 p.m. ET. If one thing is certain from today, it’s that Braxton Setzer crushed them, and he has a trio of anglers right on his heels.

If you’re in the Bainbridge area, be sure to swing by Earle May Boat Basin to watch weigh-in, and stick around afterward as Colt Ford will be performing at Bainbridge’s 2019 River Town Days festival.

Thanks for follow along with today’s blog and leaderboard. Tune in to FLW Live for full coverage of today’s weigh-in.

Persistence is paying off for second-year pro Sheldon Collings. The Oklahoma angler just pulled in what looks like a 5 1/2-pounder from his juice spot. He could easily take the lead before it’s all said and done today, as he is only three pounds back of Setzer with just four fish. 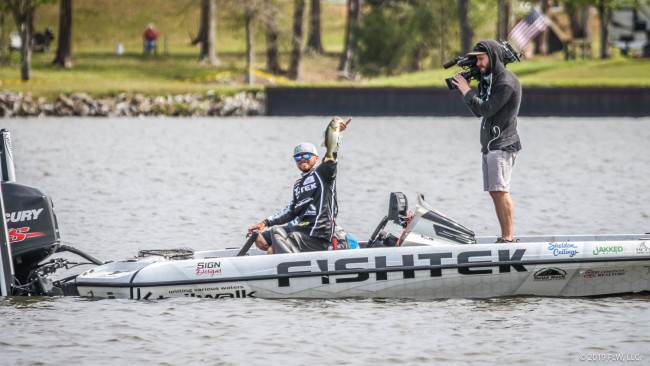 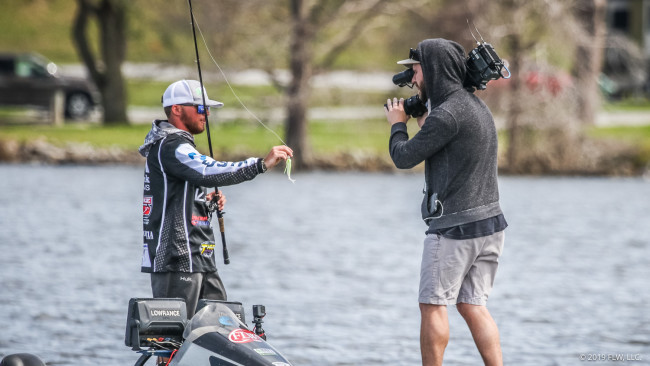 The field of 30 is starting to run and gun around Lake Seminole. Pros who have a limit are in headhunting mode, while others are purely scrambling looking for anything longer than 12 inches.

As far as updates go, Greg Bohannan is up to four fish in the boat. Sheldon Collings just bagged fish No. 3 on his white and chartreuse ChatterBait. Miles Howe has 12 pounds in the livewell. Jason Abram is up to 14 pounds on the day. Lastly, Brian Latimer just caught his fourth keeper –  this one about two pounds.

Things aren't as electric as they were earlier in the day, largely in part to Braxton Setzer picking up and moving from his juice. Still, there are fish being caught literally all across the lake. Rob Kilby and Brian Latimer are both within striking distance of Setzer. Bradford Beavers, Sheldon Collings and Kurt Mitchell really need to get something going, as they each have only have one fish.

We’re likely hitting the time of day where things start to turn into a grind, so every fish is getting more and more important. Remember, the pros have an extra hour to fish this afternoon, which is something they haven’t had until today. It will be interesting to find out if we see anything new in today’s late-day patterns. 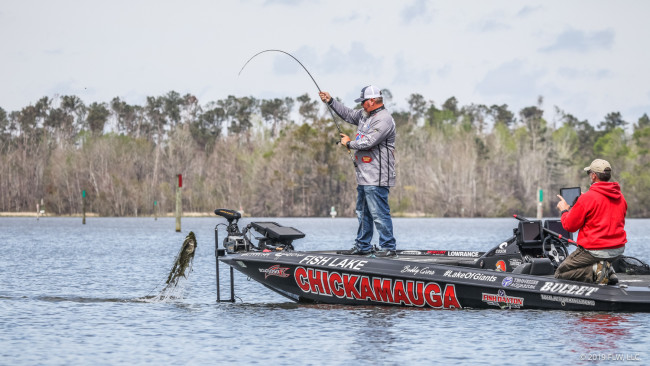 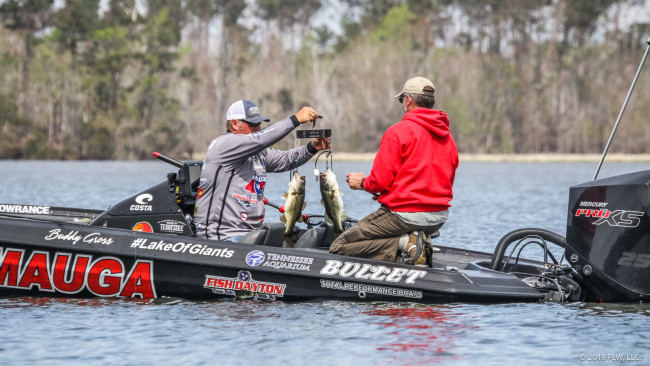 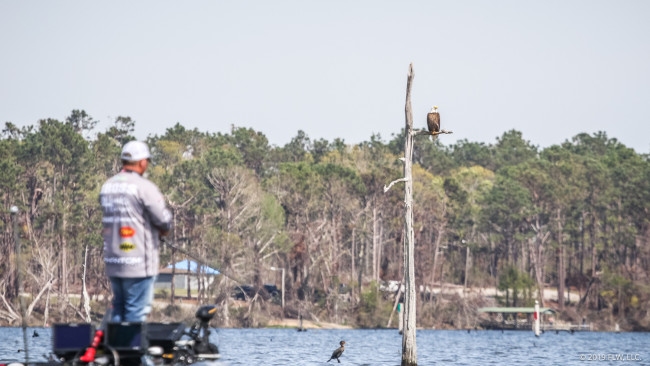 Rob Kilby just completed his limit. He is fishing way up the Chattahoochee and is about four pounds behind Setzer. Realistically, Kilby is in good shape considering Setzer’s weight has just about peaked for the day, while Kilby’s is only at 14 1/2 pounds. He’s much more likely to upgrade what he has than is Setzer, who has a box full of big ones.

Brian Latimer caught No. 3, which seems to be at least 4 pounds. It’s been slow for him, but the quality is there, and he only needs two more. He’s flipping hydrilla heads on a flat. “You have to fish every flip like one is sitting right there in that hydrilla head.”

Buddy Gross has a limit and has culled at least once. He’s unofficially at 15 1/2 pounds and in sixth place. After his win on Toho, the Georgia pro is working on one heck of a back-to-back.

Sheldon Collings just caught his first fish of the day –  a 2-pounder. He says he is going to stick it out on that spot all day. 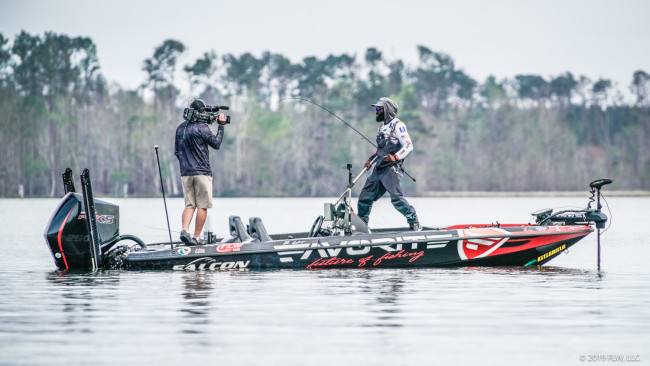 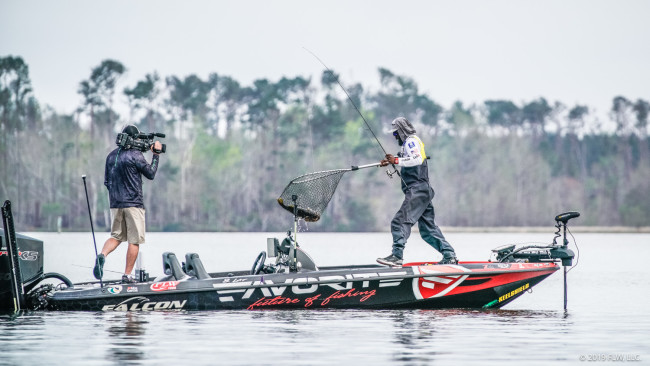 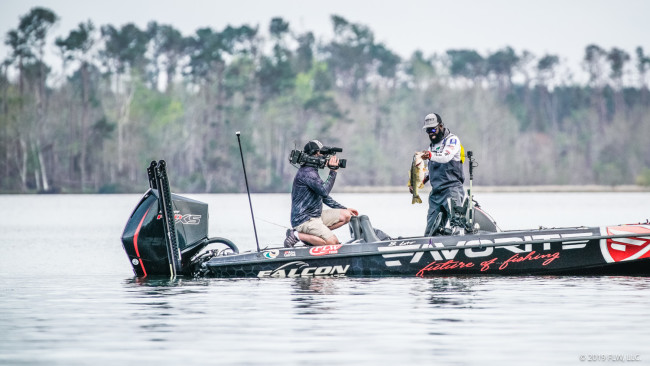 Brian Latimer finally broke the ice and caught his biggest fish of the weekend – a 5-plus pounder on a spinning rod. Shortly after, B-Lat caught a 3-pounder for fish No. 2. It’s safe to say his day is quickly turning a 180.

11: 10 a.m. – After getting a closer look at B-Lat’s two fish, it’s safe to say they are both larger than previously reported. The first one looks more like a 6 and the second looks like a 4. His fish are all dense prespawners.

Braxton Setzer’s magical day keeps getting better. On FLW Live, Setzer caught what appeared to be close to a 6-pounder. He now has upward of 24 pounds in the livewell. His fish seem to be reloading in the ditch that he is fishing. He says, “They’re using this little ditch as a travel route to get where they want to be to spawn.”

The sun is coming out and the bite seems to be turning on a bit. Brian Latimer and Bradford Beavers are both on the board now. Terry Bolton and Jared McMillan are one fish shy of a limit and several other pros have three fish in the box. 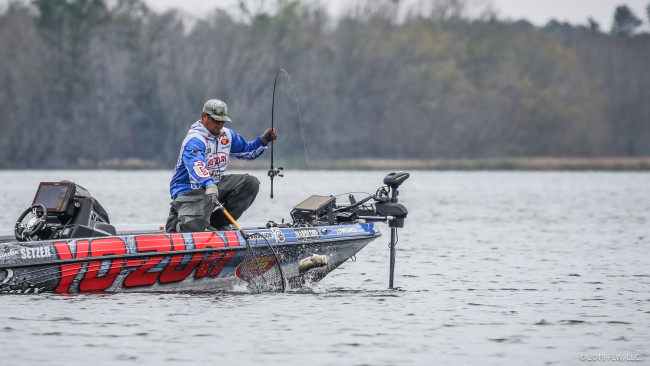 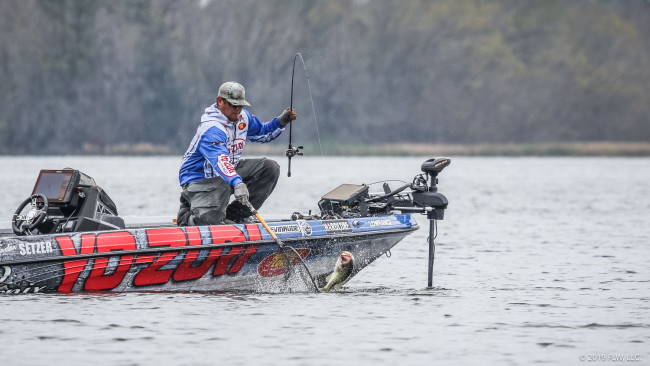 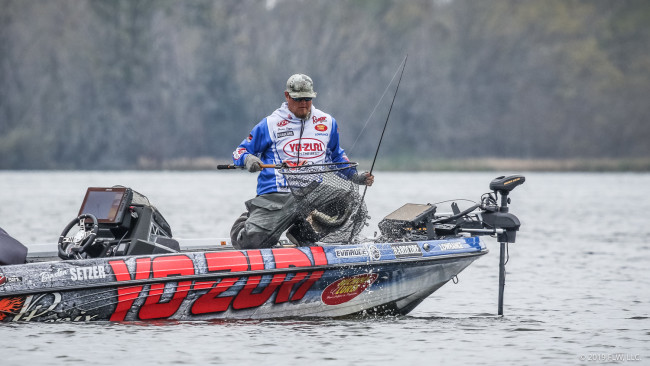 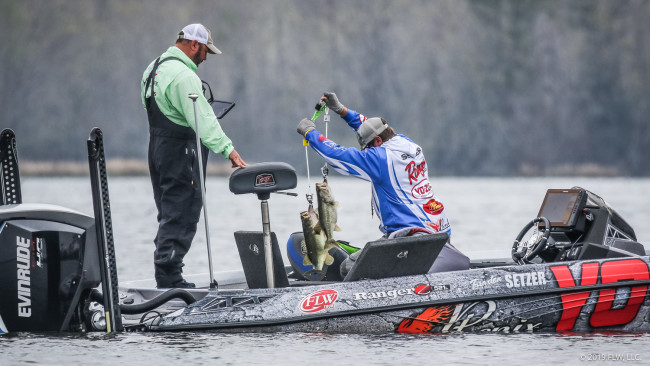 Since Bryan Thrift’s consecutive Tour-level competition limit streak came to an end yesterday at 71, Brian Latimer happened to move into first place with his 18-straight limits. Ironically, B-Lat hasn’t has been snake-bitten thus far today on Seminole. He is keeping a positive mentality, though, as he said he is happy knowing he will at least have held the active record at some point in his career.

Braxton Setzer still has his school fired up. He just pulled in another 4-plus pounder to cull out a smaller fish. It looks like he is dragging a small dark worm around some offshore stumps.

Bradford Beavers and Sheldon Collings have struck out so far, but they’re still in fine shape given the fact that Setzer has needed a monster start to overtake them. Rob Kilby got the message. He’s about 8 pounds back and only has three fish for 9 pounds. There’s still plenty of time for a shake-up at the top of the leaderboard. 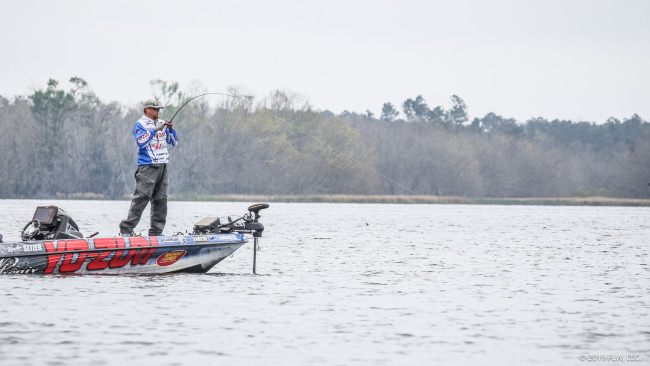 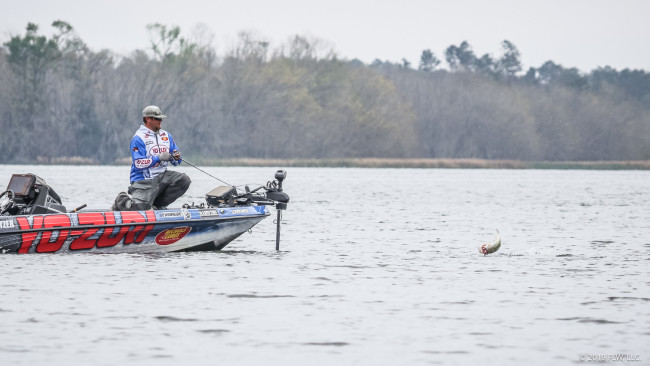 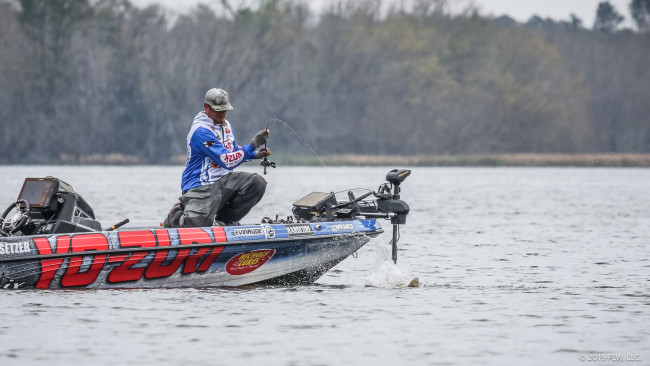 According to Braxton Setzer’s marshal, the Alabama pro made seven casts and caught seven fish. That’s the type of flurry that will get him back in contention with a chance of winning this thing. Now, it looks like he is dragging a worm super slow – something we haven’t seen from him yet.

On a side note, we have a few guys duking it out for the AOY points lead this weekend. Terry Bolton had a four-point lead on Joseph Webster coming into the tournament, and now, based off of the unofficial leaderboard, they are within a point of each other. Also, we can't overlook Scott Martin, who is right on the tails of Bolton and Webster in the AOY points standings and today’s unofficial leaderboard.

Apart from Setzer’s tear, no one’s really gotten on them extremely well this morning. In fact, only three pros (Weaver, Bolton, Dickerson) reportedly have more than one fish in the box so far.

Braxton Setzer is making the most of this morning. He has a limit of around 20 pounds, which is way more than he had all of yesterday. Now it will be all about culling, as he still needs to make up the ground he lost on day two. Still, he’s been smoking them so far and already culling. He’s unofficially in first place at the moment.

Terry bolton and Kurt Mitchell each have a fish over 4 pounds.

With the fog delay, these early fish will be super crucial, considering how strong the morning bite has been. If guys can’t capitalize on what is left of the morning, they’ll have a much more difficult time getting five keepers in the boat the rest of the day. 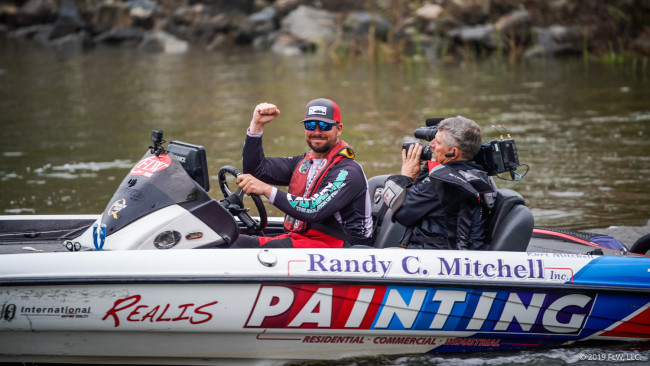 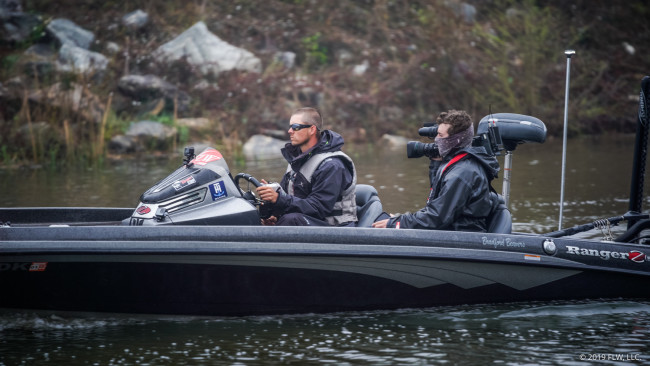 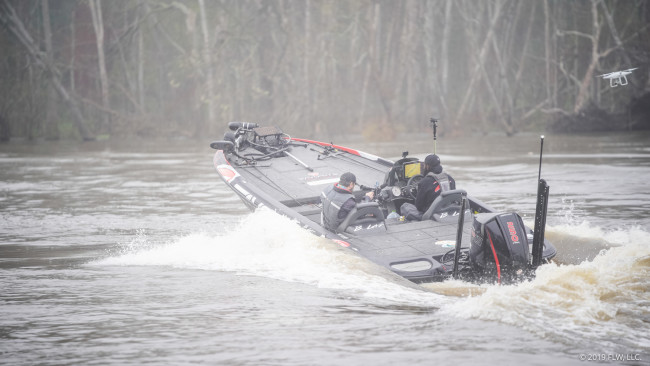 After a fog delay of a little over an hour this morning, the breeze picked up and pushed it out of the area for the most part. Bill Taylor has given the all-clear and it’s time to roll.

Bites were hard to come by on day two of the FLW Tour event on Lake Seminole presented by Costa, but the field is cut to 30 anglers on day three, moving day. With less boat pressure on Seminole, the top 30 should have more water – and more fish – all to themselves.

That’s good news for the likes of Bradford Beavers and Sheldon Collings (leader and second-place, respectively), who have pulled most of their fish from a single spot so far this week. Still, a warming trend has been pushing fish up to spawn, and it’ll be warmer today than it’s been to this point in the tournament. Those hefty prespawners are going to continue to come at a premium.

The early bite has been the ticket this week. Today should be no exception, though anglers are getting a bit of a late start that could affect how long that window stays open. It’ll be warmer in the morning with very little breeze, and some cloud cover could be exactly what these pros need to capitalize on that early window.

Catching them early and often will be the key, and we have all the coverage you need here and on FLW Live. Stay tuned. 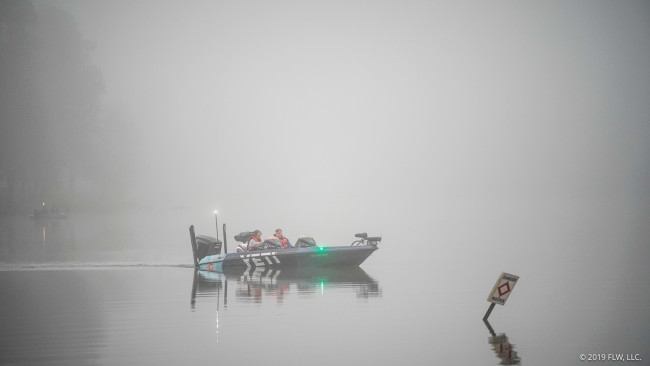 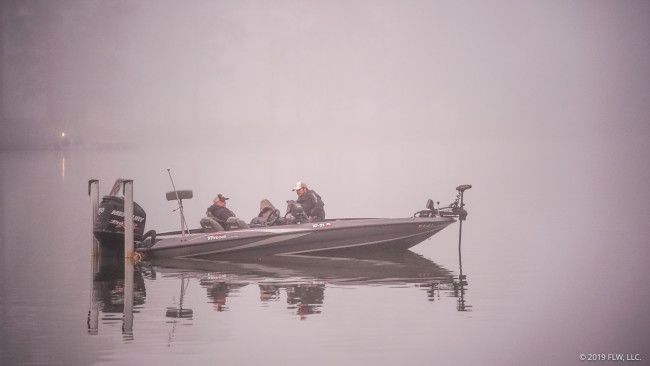 With heavy, dense fog and a local fog warning for the next hour or so, we're officially in a fog delay. FLW Tour Tournament Director Bill Taylor says FLW staff is down the river checking on the fog, an area that sounds to be even more hazardous at the moment. Taylor is going to take a boat out himself in just a bit to monitor the situation. It looks like it may be at least an hour before official takeoff.

FLW Live will still go on air as scheduled at 7:40 a.m. Stay tuned.

Sky: Foggy, giving way to overcast skies, some sunshine in the afternoon

Wind: Calm in the morning, maximum of 13 mph from the south

FLW Expo: 2 p.m. ET through the end of weigh-in at Bainbridge Earle May Boat Basin