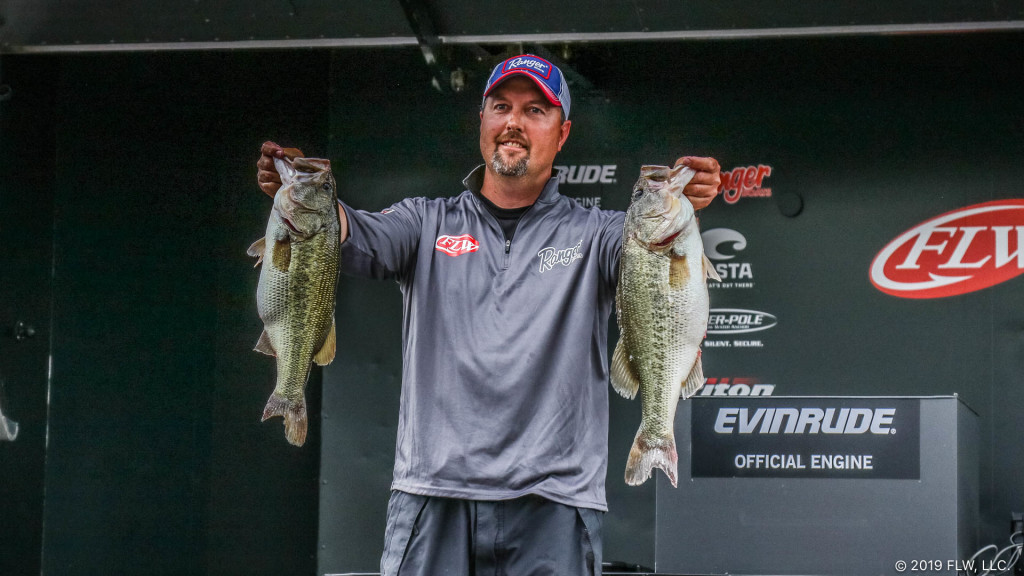 Three days, three leaders. After the third day of competition on Lake Chickamauga, that leader is Ron Nelson.

Nelson, an FLW Tour rookie with an impressive record in Costa FLW Series competition and nearly a third of a million dollars in career earnings with FLW, is no stranger to fishing on the final day. At the Tour’s sixth stop of the season, presented by Evinrude, Nelson heads into the final day with 65 pounds and a narrow lead.

John Cox edged out Nelson by just 5 ounces after day one, and a 14-pound, 11-ounce stringer on day two could have easily sunk the Berrien Springs, Mich., pro. He was still in fourth place after Friday, but momentum is a very real thing in professional fishing.

That fact isn’t lost on Nelson.

“Every fish you catch puts you in another position to make another decision,” he says.  “That reset button had to be pushed every day I’ve been fishing. You have to have a lot of focus.

“It’s just momentum. I haven’t caught a giant yet. I look forward to catching hopefully a giant one of these days. I did in practice; I caught a few giants.”

Nelson stumbled a bit on day two, and his day three got off to a rocky start. He decided to start on some ledges he fished previously this week. It didn’t quite go as planned.

“Those fish were there again,” he says of the ledge he started the day on. “They’ve been beat hard, and it just didn’t feel right. I had 20 or 30 bites and had two fish hooked. They just would not commit.”

By mid-afternoon, a sizeable thunderstorm moved in, forcing many anglers (including Nelson) to take cover. He could have stewed on his bad fortune while waiting out the rain and lightning. Instead, he hit that reset button and got right back to it.

Keeping a cool head, Nelson moved around the south end of the lake in search of some quality fish. It wasn’t until late in the day those fish finally showed themselves. 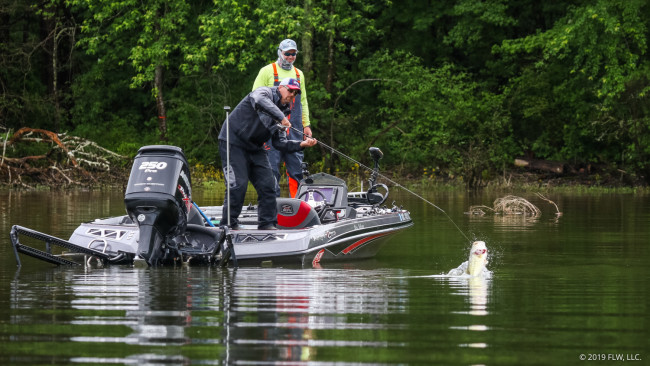 It was that string of fish that did most of Nelson’s damage, though he didn’t know it at the time.

“I had no idea I had 25,” Nelson says. “You box them and get right back to work. You keep that focus, keep that momentum going.”

In fact, Nelson was just an ounce shy of 26 pounds, good for the second-biggest stringer of the tournament. He sure picked a good day to do it.

“It’s a blessing,” he admits. “That’s the biggest thing. I feel honored.”

Nelson is somewhat of an enigma in that he’s an angler who is both cerebral and intuitive – in other words, he gets his cake and eats it, too. The 44-year-old Tour rookie can break down a fishery and know exactly where fish are and what he should throw at them. He uses conventional bass-fishing knowledge to do what he needs to do.

But Nelson is also an angler who trusts his instincts and has a certain feel for the fishery he’s on. It’s hard to explain, though Nelson does a good job of doing so.

“[It’s] understanding the lake, trying to dance to the rhythm of the lake, and we just didn’t want to dance today for the first big part of the day,” he explains.

Intuition is often what separates good anglers from great anglers. This week, Nelson has been great, and he has a chance to prove it with some hardware and a big check on Championship Sunday. 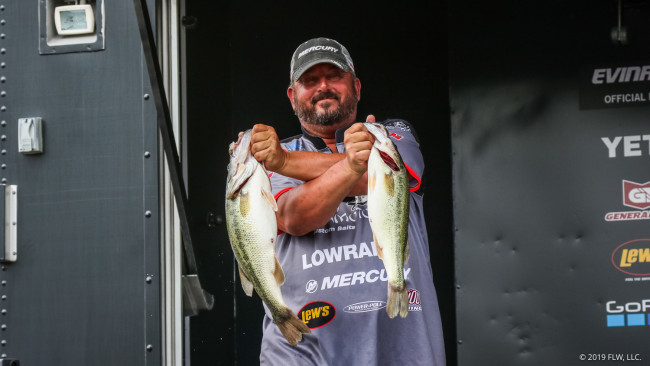 Matt Greenblatt missed taking the lead into Championship Sunday by less than a pound by virtue of Nelson’s stunning day-three performance, but he’s on the right fish and he’s riding that wave as long as it will carry him tomorrow.

Greenblatt’s spot – the back of a creek up the river that has grass, shallow water and plenty of quality fish – is his juice. For three days he’s tossed around a 5-inch Yamamoto Senko rigged various ways to catch almost all of his fish, including a 7-3 giant that gave him the ride of his life on Saturday.

“That was a heart-beater,” he admits. “It’s amazing how religious we become when we get a big fish on.”

Greenblatt hooked into the giant with a wacky-rigged Senko. He’s using braided line with a fluorocarbon leader, and after he hooked the fish, it ran his line through a clump of vegetation that his leader got caught on. After several tense moments, the braid finally cut through the vegetation and he was able to reel in enough slack to keep the fish pinned.

“It was quite a debacle,” he adds. “I don’t think I took a breath for that minute, minute and a half.”

The Port St. Lucie, Fla., pro plans to spend his entire day four back in that creek in hopes that it still holds enough fish to give him the win. 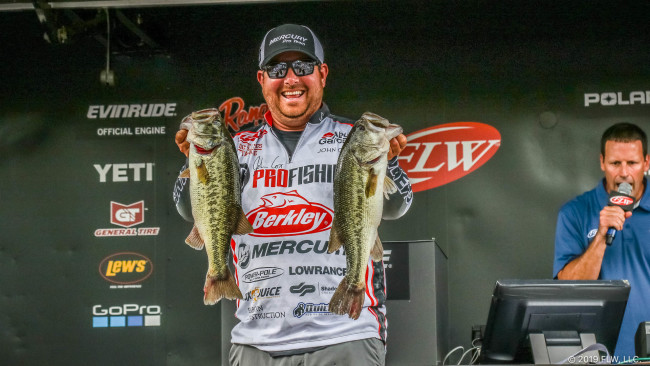 Yesterday, John Cox ran into some tough breaks that led to his smallest bag of the tournament (17-15). On Saturday, it was all about the lucky breaks.

“It was just exciting today,” he says. “Nothing was working out. I stopped on a couple bedding fish and couldn’t get anything to work. I stopped on a 3-pounder, went to catch it and a 5-pounder swam on the bed and I caught the 5. That made me feel like maybe some things are going to go right today.”

And they absolutely did.

Cox brought 19-15 across the weigh-in stage, due in large part to bailing on his sight-fishing pattern when bad weather moved in. He switched to a white Dirty Jigs swim jig and went to work.

Switching away from sight-fishing got Cox’s wheels turning, and he’s liking the idea of running some new water on Sunday in the hopes of expanding on the shallow pattern that worked so well for him later in the day on Saturday.

“I really don’t know [what I’m going to do tomorrow], because I like what I saw up shallow; they looked good,” he says. “Some spots looked better than others, so I’m just going to run some new stuff and see what feels right tomorrow.” 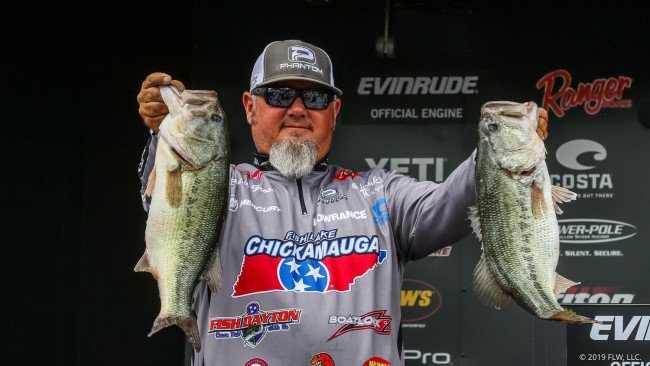 Buddy Gross knows his home lake as well as anyone, but it also scares him as much as any lake he fishes. Gross just knows what it’s capable of producing for any angler on any given day.

“It’s my home lake, but it scares me the most,” he admits. “This lake is really hard to dig yourself out if you get in trouble. Sometimes when you miss it here you miss it bad.”

And yet that didn’t stop the two-time Tour winner from swinging for the fences on day three. With a guaranteed top-30 finish and valuable Angler of the Year points already in hand, moving day was all about moving closer to a win for Gross.

“I’m not getting as many bites,” he adds. “I gave up on the small fish today and swung for the bigger ones, and I’m going to do the same thing tomorrow. I could really zero.”

The chances of Gross zeroing on his home lake are slim, especially now that he has a little something figured out.

“I just started fishing where I know the bigger ones live,” he says. “I got there this morning and they were fired up. I got all jumbled up in the net with one, but they came up schooling as soon as I got it in the net. If I get my timing down better, I think I can catch a real big bag first thing [Sunday].”

After having had just four fish in his livewell with only a couple hours left to fish on Saturday, securing a quality limit early on Championship Sunday could be the key to Gross earning a Tour win on his home waters. 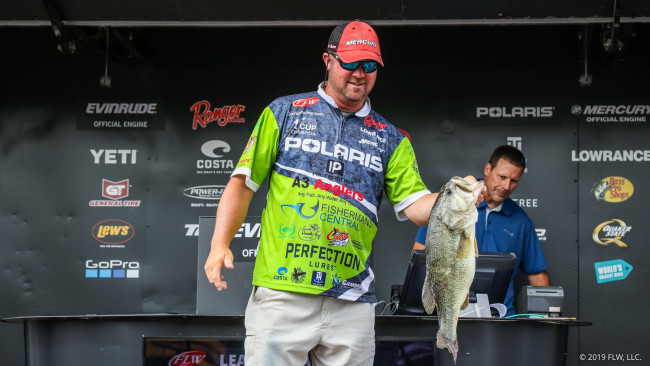 Speaking of swinging for the fences, David Dudley plans to do just that on Sunday. Sure, he caught 18-1 on day three, but he knows the shallow bite he loves taking advantage of just probably isn’t going to provide him with enough weight to grab a win.

“Tomorrow, I think I’m going to call an audible and try to find them out off the banks somewhere,” he says. “Buddy Gross and Alex Davis, two great offshore anglers, almost had 25 pounds both. I don’t think I can do that shallow. I’m going to have to get extremely lucky.”

Dudley says he got distracted by a number of things on day three – the shad spawn, some topwater stuff and the rain – and didn’t really stick to the plan he had in mind. This time around, he’s going to start his day with a plan: start shallow and then go hunting for giants offshore.

While Dudley loves to fish shallow – and he knows going out deep could hurt him just as likely as it could help him – he’s not concerned with the possibility of striking out. He’s choking up and looking to go yard.

Go big or go home. And Chick is a good lake for that mentality. 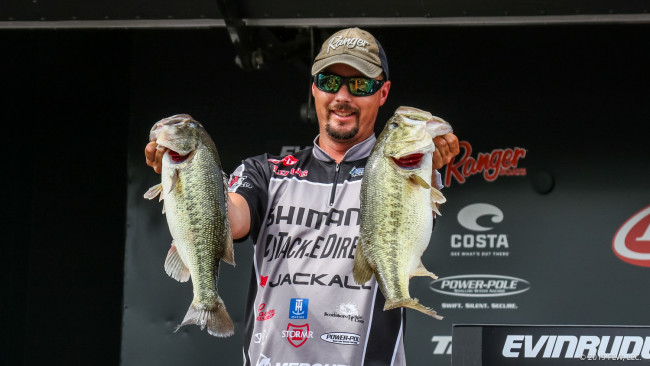 Alex Davis is an offshore-fishing hammer, but days one and two weren’t as kind to the Albertville, Ala., pro as he would have liked. On day three, Davis finally got some offshore fish fired up – in a big way.

Davis says he “caught a ton” and it was almost “every cast.” The best part is that Davis fished the same spots Saturday that wouldn’t produce either of the previous two days. That’s great news for Davis and very bad news for the rest of the top 10. 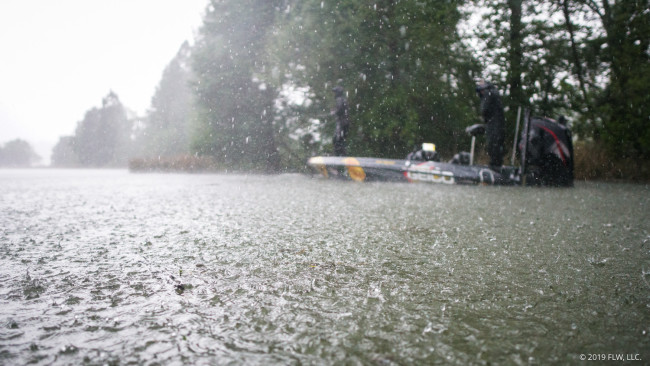 For top-30 pros fishing on Saturday, the weather was less than ideal. The thunderstorm that moved through mid-morning left many anglers scrambling for cover and hitting the reset button after the worst of it had passed.

The good news? There’s only a 20 percent chance of rain on Sunday, though eastern Tennessee weather has a tendency to be wildly unpredictable. 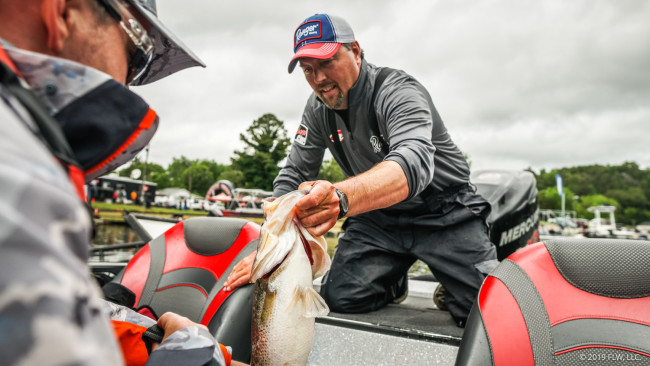 On day one, John Cox was the second-to-last angler to weigh in. He took the lead with a bag of 24-11.

Today, Ron Nelson was the last angler to weigh in, and he took the lead with a 25-15 stringer.

There seems to be something special about weighing in late in the day in this tournament, and that could make for some fireworks Sunday afternoon.