Top 10 Baits from the Cup at Hamilton 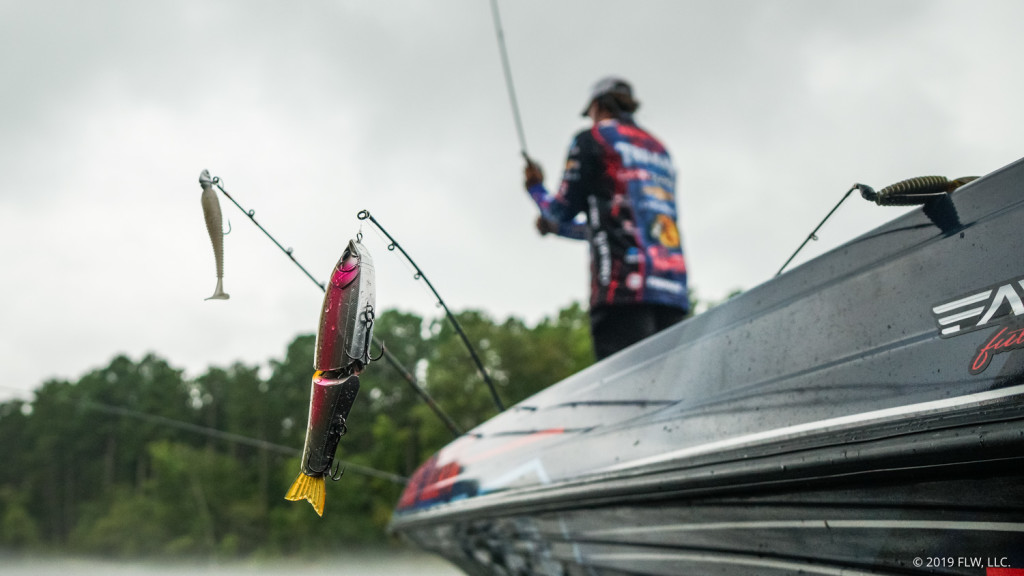 While there weren’t too many patterns in play at the 2019 FLW Cup at Lake Hamilton in Hot Springs, Ark., the nature of an August tournament in the South forced most of the top finishers to mix in a bunch of baits to catch their fish. Here’s what the top 10 used to catch schoolers and ply brush, docks and various types of shallow grass. 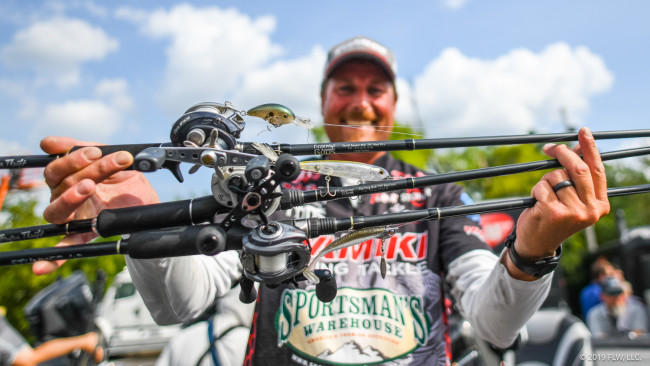 1. FLW Cup champ Bryan Thrift had at least 20 rods rigged up each day. On the bank, he caught fish on a buzzbait, plus he landed one keeper on a frog the last day. For schoolers, Thrift fished a small topwater walking bait, a small crankbait and a Damiki Rig Underspin Head with a 4-inch Damiki Armor Shad swimbait. In the brush, Thrift threw topwater, a Texas rig and a drop-shot. 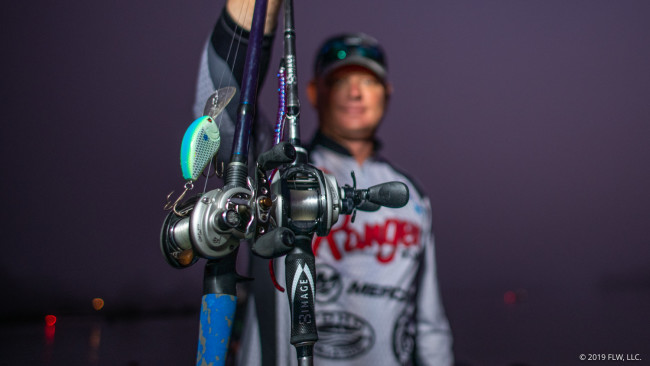 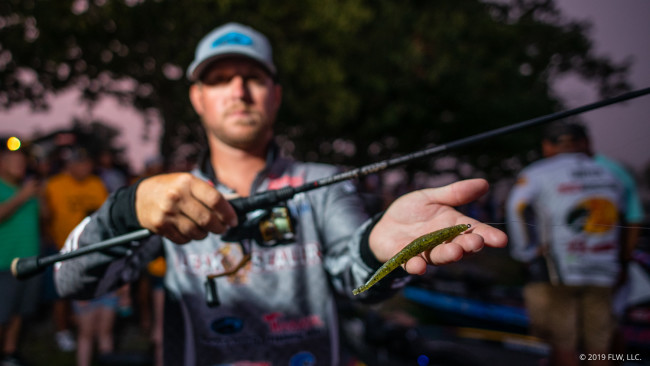 3. Louisiana pro Dakota Ebare fished in the Blakely Mountain Dam tailrace below Lake Ouachita in clear, flowing waters. He targeted current breaks such as docks, inside grass lines and laydowns with a weightless watermelon magic Zoom Salty Super Fluke for most of his fish. Switching from 12-pound-test line to 8-pound test was a critical move for him. Ebare also caught a few on a buzzbait and a weightless Zoom Trick Worm. 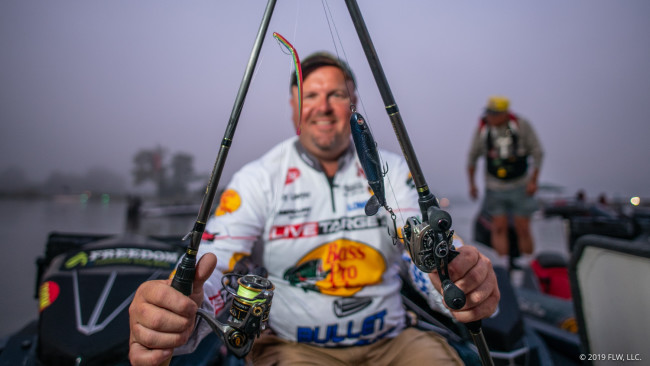 4. A shallow topwater and brush pile combo worked for Jeremy Lawyer. Up shallow, Lawyer fished around docks and seawalls with a River2Sea Whopper Plopper 130 that was custom painted by Fall Creek Lures in midnight shad or a 3-inch Livetarget Glass Minnow BaitBall Popper in pearl natural. When he moved to the brush, Lawyer fished a drop-shot and a Texas-rigged watermelon candy Zoom Magnum Trick Worm. 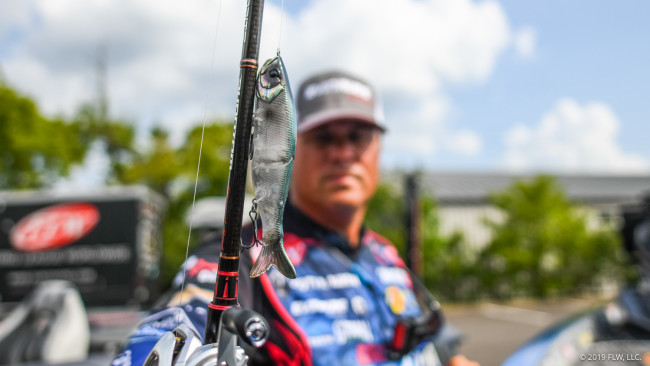 5. Scott Martin also spent his tournament way up in the Ouachita tailrace. The Florida pro caught a few fish around current breaks with a couple of glide baits, but most of his fish came skipping finesse worms that were rigged weightless Texas style or wacky under docks and around other cover. His worms were a green pumpkin Googan Baits Slim Shake and green pumpkin Googan Baits Lunker Log. 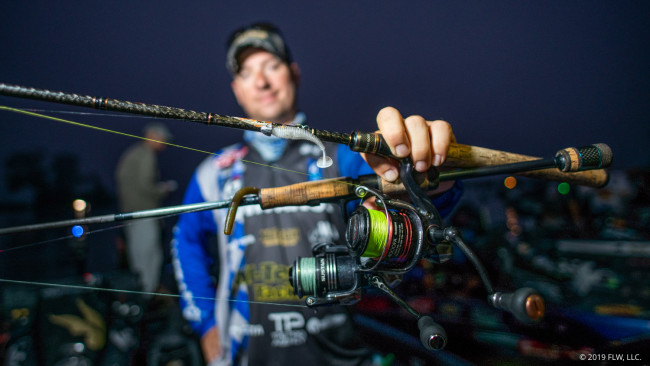 6. Minnesota pro Austin Felix did a little junk-fishing this week but primarily fished shallow. For schooling fish, he used a 2.8 Keitech Swing Impact FAT swimbait on a 3/16-ounce All-Terrain Tackle Smallie Smasher Swimbait Head. He also threw a buzzbait and caught a bunch of fish on a wacky-rigged Yamamoto Senko – the 4-incher in clear water and 5-incher in dirty water. 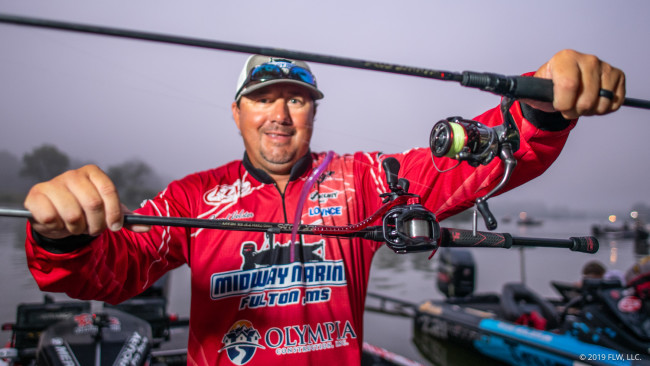 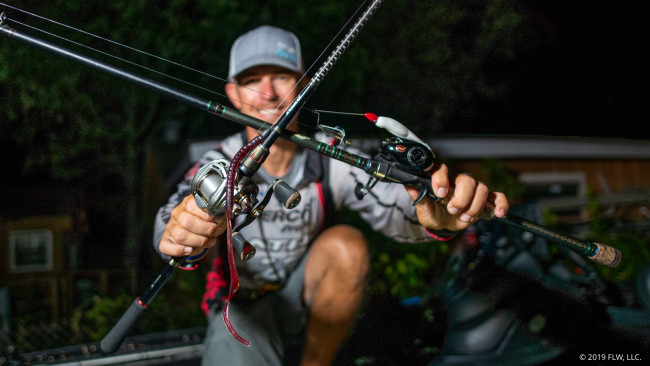 8. Fishing his first FLW Cup, Ryan Salzman made the top 10 by fishing shallow in the morning for a couple hours before sliding out to the brush. Salzman fished a 3/8-ounce War Eagle Buzz Toad Buzzbait, Evergreen OB Popper and SPRO Bronzeye Frog on the bank. In the brush he combined Lowrance LiveSight forward-looking sonar with a Reaction Innovations 6.95 Flirt Worm (morning dawn and green pumpkin) on a drop-shot with a 1/4-ounce Titan Tungsten weight and a Texas-rigged 11-inch NetBait C-Mac Worm. 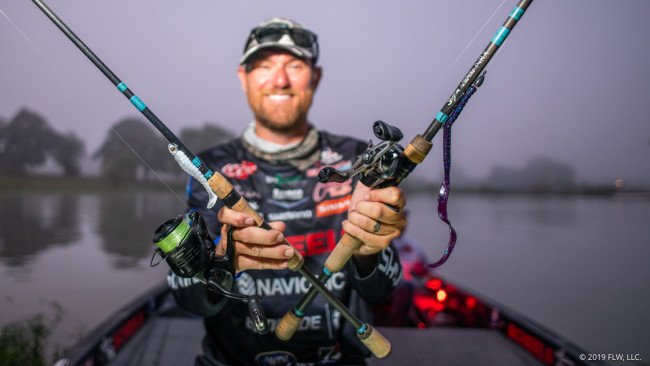 9. For ninth place, Josh Douglas fished an Outkast Tackle Goldeneye Swimbait Jighead with a BioSpawn ExoSwimmer swimbait around brush and schoolers. In the mornings, he threw a buzzbait with a toad trailer. Finally, for fishing brush, he Texas-rigged a WOO! Tungsten weight with a 5/0 Owner round-bend hook and a blue fleck Zoom Ol’ Monster. 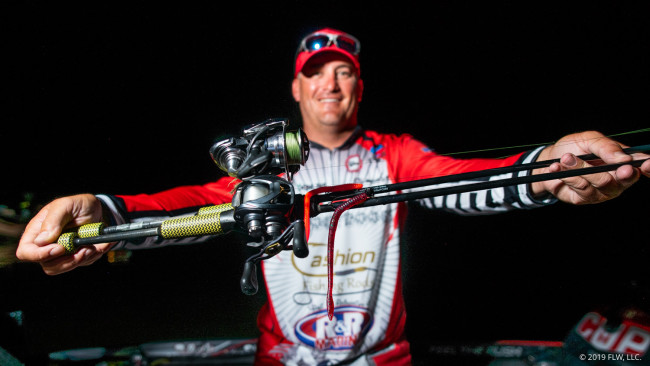 10. Jordan Osborne was also committed to the brush bite and spent most of the tournament within a few minutes of the takeoff ramp. He fished a Picasso Shakedown football shaky head with a 6 1/2-inch redbug Strike King Perfect Plastic Finesse Worm and a weightless merthiolate Zoom Trick Worm.