A 4-pound kicker on Lake Martin is like an 8-pounder in Florida. And if that’s the case, Barron Adams’ kicker was like weighing in a marlin.

Tipping the scales at 8-13, Adams’ kicker blew away the Berkley Big Bass award on day one of the Tackle Warehouse Pro Circuit event and weighed more than nearly a third of the field’s limits by itself. Needless to say, the Georgia rookie had THE fish to anchor what was the day’s heaviest bag at 17-2.

The scary part is, he could’ve had a megabag over 25 pounds if everything went right.

“I had [the kicker] by 7:30 a.m. this morning,” says Adams. “After that I went trying to catch a megasack with some other ones I had marked on beds, but it just didn’t happen.”

Pros were already having to adapt on the fly for this event with the actual start being moved up a day and not having Marshals, all as precautions to combat the spread of COVID-19. With no day off between practice and the start of the event, many pros hoped their banner practices would extend into today. Yet, for many, falling water levels had the bite a bit off.

Of course, the lack of an off day certainly helped Adams. He found the big girl locked on a bed yesterday evening, and when he found out he was boat No. 4 today, he knew exactly where he was going.

“I actually pulled in and couldn’t see her,” says Adams. “It was too dark, so I went to the back of the pocket and came back out, and there was just enough light for me to see she was still there. Within 5 minutes I was screaming and hollering.”

Adams originally had a pattern from practice he planned on utilizing today, but once that kicker hit his livewell, he opted to scrap it and try to see if he could go for two other big ones he had marked on beds.

“I pulled up on the first one, which was like a 6-pounder,” says Adams. “When I flipped in on her she ran off. So I waited, and when she came back I saw why she was so spooky – she had a merthiolate Zoom Trick Worm hanging out the side of her mouth. I sat on her for 30 minutes, be she was not ready.

“Then I had a 4-pounder I went and checked, but I never could get her to bite. Hopefully they both calm down and I can get them tomorrow.”

Speaking of tomorrow, Adams is in a great position as he still has his entire practice pattern he never touched; instead simply fishing docks the rest of the day to fill out his limit. But he was averaging 12-13 pounds a day in practice on his main pattern, and if either of his remaining fish he has marked decide to play tomorrow, Adams could be well on his way to another big day.

The only thing that may stop him is battery issues. He had an issue flare up in practice, and today he says his batteries were dead by 1 p.m.

“I’m going to go get them looked at right now and hopefully get that issue fixed, because I’m definitely pumped right now,” says Adams. 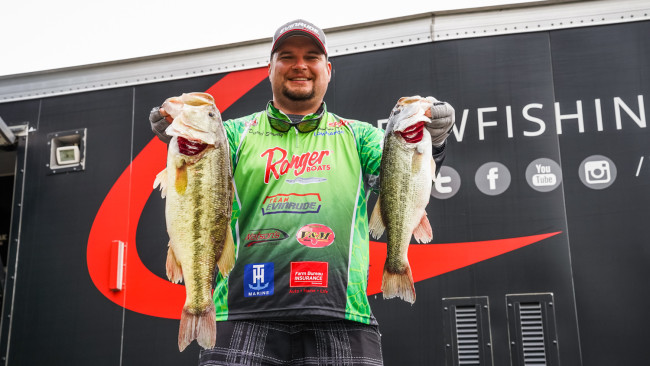 Adams’ got a massive boost from his kicker that put him in first, and Snavely’s two kickers did the same.

“The two big bites is what really made the difference for me,” says Snavely.

Now, unlike Adams, only one of Snavely’s kickers came off a bed, and it was the 4-pounder which he just happened to stumble upon first thing this morning. The bigger one actually came a bit later in the same area.

“I caught a 4-pounder in practice in that area,” says Snavely, who was obviously tight lipped about what area of the lake he was fishing. “So I knew there were some better fish there.”

As for tomorrow, Snavely did say he had a spotted bass pattern he didn’t even touch today, but his hope is once again to see if he can focus on largemouth to get those key bigger bites.

“I may fall flat on my face tomorrow  [going for largemouth], but knowing I have those spotted bass makes me feel pretty good,” says Snavely. 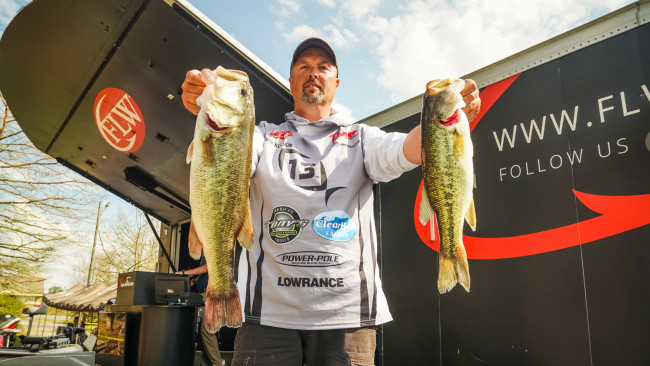 Nelson easily could’ve challenged Adams not only for the lead but also for big bass. If only he hadn’t messed it up.

“I caught two 7-pounders in practice,” says Nelson. “So I knew where some big ones were, and I had a big, big one marked. I went to her first thing, and she had a 2-pound buck with her yesterday. Well, I was so far off her, that I couldn’t really see. I just thought the buck kept eating it, and I didn’t want to catch him.

“So I got in closer, and then I see the big, big was gone but a 5-pounder had replaced her, and that’s what was biting. Well, when she saw me she left. So I let it sit hoping she’d come back, and when I checked again, the big, big was there again. But she would keep swimming off.”

Frustrated with his sight-fishing efforts, Nelson went back to his offshore swimbait pattern only to find more frustration, as his fish would follow his swimbait but rarely eat it.

“I just had to keep covering new water,” says Nelson. “The fish are not committing to anything right now.” 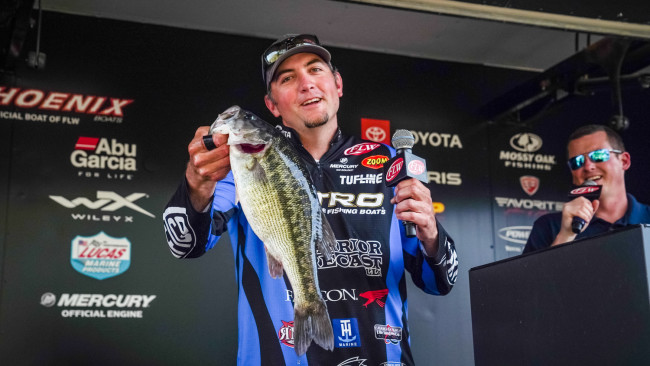 Hays figured he had about 17 pounds of bedding fish marked for today. Too bad all of them were gone this morning.

“I wanted to sight-fish all day, but when all those fish were gone, I just had to go to my back-up plan,” says Hays.

That plan involved ditching largemouth for spotted bass, but instead of 2-pounders, he caught two close to 3 and another 2 ½. He then redeemed his sight-fishing plans when he caught a 4-pound spot off a bed, only to again get kicked when he lost a bigger one soon after. 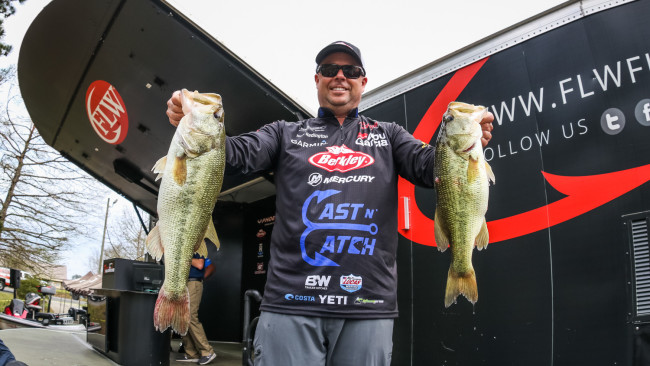 It’s hard to upgrade past 10 pounds when fishing for spotted bass. So, Redington decided to change.

“I lost a spotted bass and realized it only would’ve upgraded me a half a pound,” says Redington. “So I bailed on them and went for largemouth.”

Reddington didn’t have a solid pattern or anything; just a hunch. He’d caught some small largemouth in an area in practice, and he hoped with the warmer weather that some females may move up and join them today.

Sure enough, he coaxed 3- and 4-pounders to join his livewell while “blind bed-fishing.” Yet, it’s truly hard to say he was bed-fishing, and not because he wasn’t looking at his fish.

“Both those largemouth I caught were postspawn,” says Redington.