Stop No. 3 of the Tackle Warehouse Pro Circuit kicks off a day early 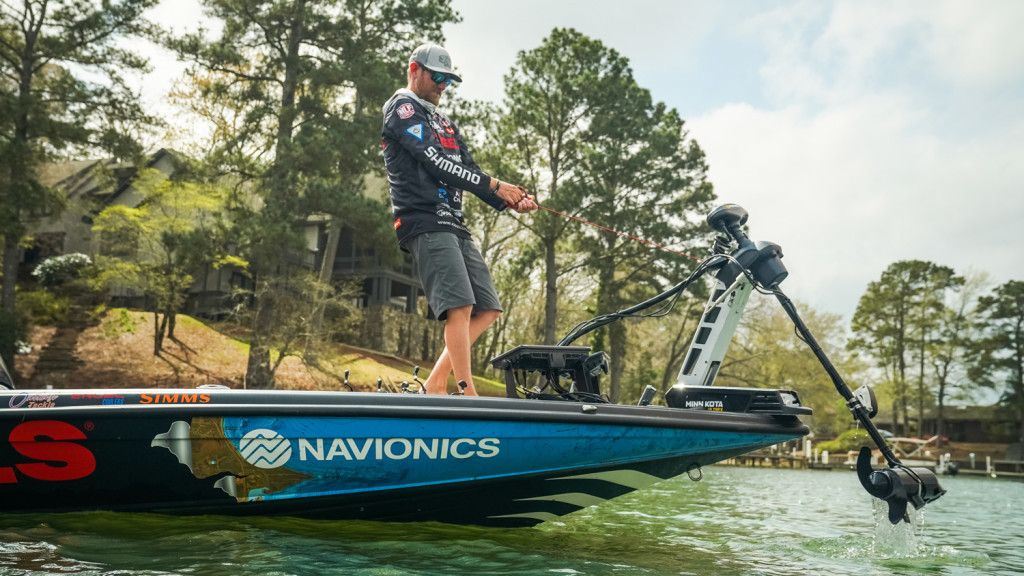 We apologize for the sporadic updates today. We're practicing social distancing and running a minimal crew this week, so get getting information has been a little tougher than usual.

That said, we know we can expect a jam-packed leaderboard at today's weigh-in. There are at least a couple dozen pros with 9 to 11 pounds that we know about. Who knows how many more will get into that range by the time they check in this afternoon.

Here lately, the dock bite has picked up. Joseph Webster culled every keeper on a particular stretch of docks where he says there was a bass on every float. There are fish on beds, on offshore structure, cruising up shallow and even schooling. If you want to catch bass, Martin is the place to be.

Join us at 3 p.m. CT for the day-one weigh-in to see who takes the early lead.

Jason Reyes made a nice upgrade to get to 11 pounds. He's in the top 10. By our estimate, however, he's looking up at the leaderboard to Jason Vance, who just landed a 3 1/2-pounder off a bed. It wasn't the fish he was working when we wrote the last update. This one moved in and at his stick bait off the bed anyway. If he can get the other one to go, he'll be in great shape.

Troy Morrow, Dylan Hays, Jason Abram, Jason Vance and David Wootton have all topped 10 pounds since the last update. Weights are going to be piled together today unless a few pros can manage to distance themselves with kicker bites.

We're watching Vance at the moment. He's working a 4-pounder on a bed. That's a big-time fish right now, but she seems especially spooky. We'll update if he can get her to bite.

Also, we'll probably wrap things up today with one more post. Don't forget to tune in for the live weigh-in at 3 p.m. CT.

12:20 – Gaston's thoughts on the spawn, Floyd is catching

We're excited for the spawn, but the push of fish to the banks might be what's hurting the bite today. David Gaston thinks so.

"Everything went on bed," he says. "I was getting like 50 bites a day on the buzzbait, and now I can’t."

So far he hasn't been able to get the 3-pounder (mentioned in previous post) to bite.

Cole Floyd is finally righting the train. He has a limit for 11 to 12 pounds, putting him easily in the top 10.

We are on the phone with Jon Canada right now, as he's culling fish. Canada estimates he has 13 1/2 to 14 pounds. That makes him the new unofficial leader. Local favorite David Gaston has just 6 pounds but is working a 3-pounder on a bed.

We just added several other updates to the leaderboard, which is the best place to see what's happening. We're also sending a group text to all anglers to prompt them for updates. Stand by for more details.

As for the fishing, several pros have expressed some surprise about just how many bass are on beds right now. That's a good sign for good fishing as the tournament progresses. The wind has picked up a bit, but Martin has enough protected coves that guys shouldn't have too much trouble getting out of the wind to hunt beds.

Finally, we've talked to several pros that have abandoned the spotted bass and are now strictly looking for largemouths in an effort to upgrade. 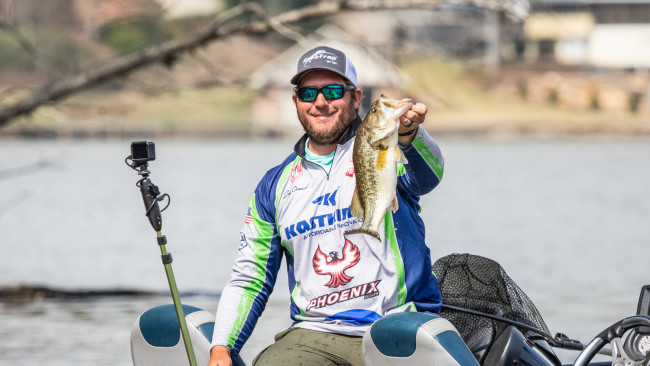 Even though the weights aren't very high right now, the fishing has actually been really good so far today. A lot of little ones were caught this morning. Now, we appear to have hit a lull in the action. It's gotten slow. Jake Ormond, one of the leaders, is on the move, and likely some of the others are as well. It's very likely that the pros with 10-plus pounds are shifting gears to try for a big bite. Maybe they're hunting a prespawn hole. Maybe they're slinging reaction baits or swimbaits and trying to catch a giant. Maybe they're peeping at spawning areas to try to find a new largemouth that's moved up. Whatever they're doing, they aren't checking in many new fish right now.

We're going to go on the hunt and dig for more updates. Remember, we don't have marshals, so we're relying on anglers to submit their fish catches. Some are too intense to take a break and text it in. We're doing our best to fill in the gaps. 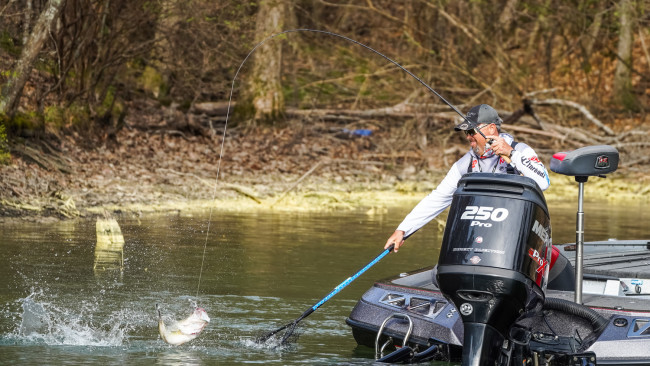 We unofficially have nine pros over the 10-pound mark. The latest to surpass it was Brad Knight, who's streaming his tournament live on his Brad Knight Fishing Facebook page. 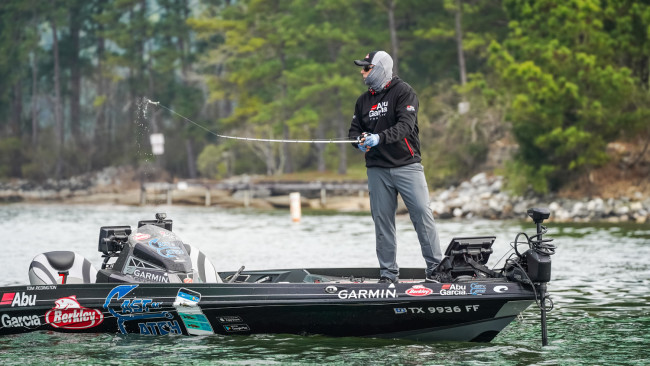 10:35 – Redington gets to double-digits; Ebare, Ormond in second

Tom Redington was able to cull up to 10 pounds just a few minutes ago. He's the fifth person to crack double-digits. Of course, now he's faced with a bigger challenge: culling up.

"Now what do I do?" he said. "It's about impossible to cull here unless you get super lucky with a pig."

Redington is spot on. Catching dinks is easy. Martin is so full of fish. Getting a big one is tough.

We still have Ron Nelson in the lead with 12 pounds. Dakota Ebare and Jake Ormond are second with 11 and change. 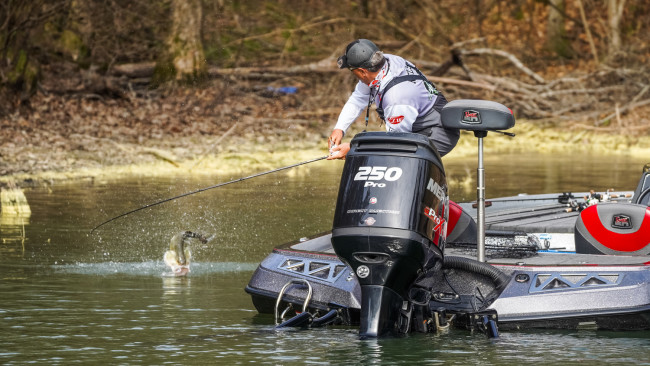 AOY leader Ron Nelson has enjoyed a stellar season thus far, and it appears he's going to continue riding that high this week. Nelson took over the lead with 12 pounds unofficially, thanks to a 4-pound kicker that completed his limit. That has him in great shape on a day when catching fish has been easy, but catching quality fish has been tough.

Jake Ormond is having a solid morning, too. He only has three fish in the livewell but already has more than 10 pounds. He started with a pair of 3-pounders then added a 4-plus.

Randy Allen also has 10 pounds, and Tom Redington is just behind him with 9 1/2.

The topwater program is still pretty solid. Most of the pros slinging surface baits are covering quite a bit of water. There are fish to be caught just about everywhere, but with the extra speed comes a greater chance of running into a good one.

Josh Douglas and Matt Becker, both smallmouth experts from up north, must be liking what they see here on Lake Martin. They're tied for the lead unofficially with about 9 pounds.

So far, the best ways to catch bass have been dragging a Carolina rig, throwing topwater (mostly buzzbaits) and sight-fishing, though the sight-fishing bite isn't exactly on fire right now. 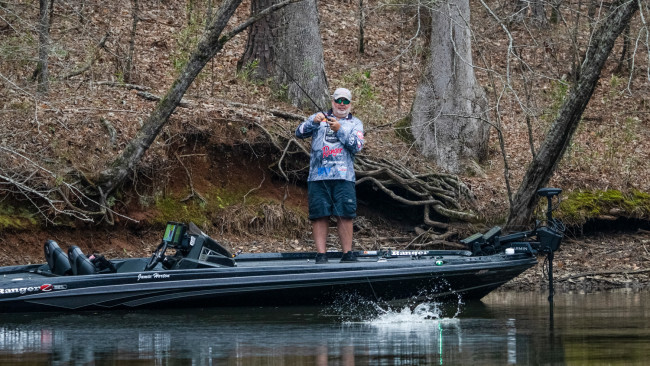 Jamie Horton is one of the favorites this week, competing in his home state. Currently, he has four in the box for a little over 5 pounds. It's an OK start, but we're more interested in his predictions for the tournament. Horton thinks that with more fish moving up, we'll see a 20-pound limit today. Let's hope he's right.

Other than that, not a whole lot has changed. Most of our updates coming in are for small limits, and not many fish over 3 pounds. Matt Reed still has the lead, followed by Blake Smith with 8 pounds even.

AOY contender Billy McDonald is catching one every cast on a Carolina rig, but they are all tiny. He has about 7 pounds.

Matt Reed has the unofficial lead … weith 7 pounds, 12 ounces. Jeremy Lawyer thinks the cloud cover is to blame for the slow fishing this morning. The forecast calls for partly cloudy skies all day, so the situation probably won't change. We do have reports of several fish caught off beds so far.

John Cox is someone you'd expect to be catching them off beds, but he's having a rough day. Cox lost a 5-pounder that could've been huge for him. A 5-pounder each day is a recipe for a top 10 this week. 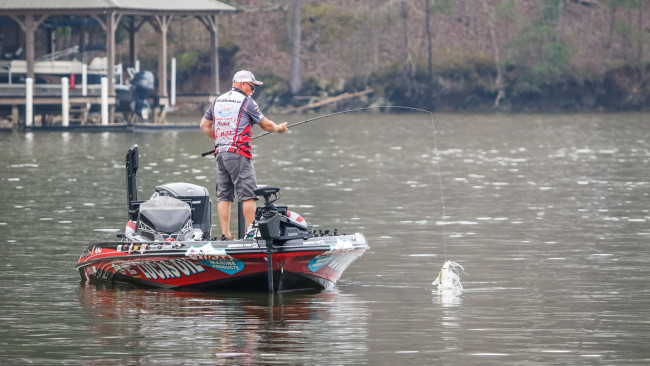 You can catch spots on a bunch of different baits right now. The guys that are starting off chasing bigger bass up shallow are mostly throwing topwater, including buzzbaits, poppers and walking baits. There are some spinnerbaits in play, too, and swimbaits. 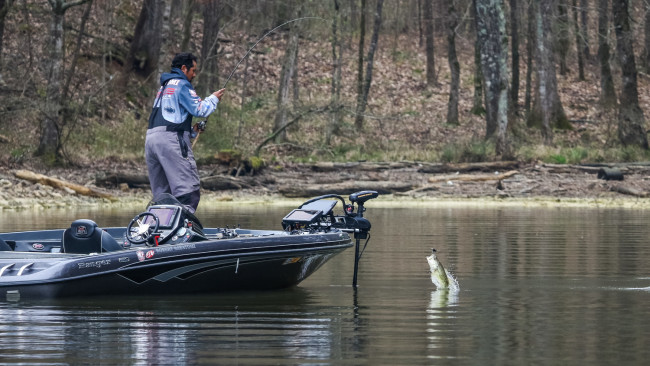 We're getting a lot of updates from anglers with limits for 5 to 8 pounds. Kyle Cortiana says he's catchign them every cast but only has a 4-pound limit. David Williams has a 5-pound limit. The only real quality bass we've heard of so far are from Colby Miller, who caught a 3.41-pound bass, and James Biggs with a 3-pounder. That sort of feels like a kicker right now.

But don't worry. They'll get bigger. Once the sun gets high and warms the shallows, we'll start to see more largemouths getting caught. Plus, a lot of anglers went hunting for a limit first thing this morning. They'll start to swing for the fence a little more midday.

These are unusual times, not only in the fishing industry but throughout the world. Efforts to combat the spread of COVID-19 have forced Americans and everyone to make incredible sacrifices, including, in many cases, postponing the activities we enjoy most. In fact, yesterday, FLW announced that it was postponing all tournaments through April 5. This week's Lake Martin event is an exception. The field of pros was already in Alexander City, Ala., when the decision was made to postpone events. FLW worked with its angler panel to develop a plan that was safe and fair for everyone, and therefore decided to move the tournament up a day so anglers can fish and then hustle home to their families. Other measures are in place to ensure everyone's safety. Only essential FLW staff is on site. There will be no marshals this week. Instead, the anglers will self-report their catches to media, and they'll run POV cameras in their boats to ensure all rules are followed. FLW is encouraging fans to not attend weigh-in, and to instead watch on FLW Live. There was no pretournament meeting. FLW instituted new launch and weigh-in procedures to maintain a safe distance of at least 6 feet between every person. That's the distance recommended by the Centers for Disease Control to minimize the likelihood of transmitting the virus. Gloves and other safety gear will also be on hand for staff and anglers.

As for the fishing, things are taking off in Alabama. Catching fish is not at all a problem on Martin. It's full of fish. Getting bit is easy. Catching good ones is a little tougher. A lot of pros will wind up weighing in 8- to 9-pound limits of spotted bass this week. Getting a big largemouth will separate anyone from the pack. There's a very good chance we'll see some fish caught off beds in this tournament, too. What we don't know is whether the spawners will get picked off in a day, and then that pattern will fizzle, or if more fish are coming to the bank by the hour and replenishing the supply. Regardless, the shallow bite could be the ideal way to catch a kicker.

One last note about coverage: FLW is running a small media crew and relying on anglers to self-report their catches. Therefore, you can anticipate that the leaderboard and live blog will be updated a little slower, and a little less often. We apologize for the inconvenience. You can always follow along live during the daily weigh-ins to see how your favorite angler did each day.

Precipitation: slight in the morning; up to 50 percent chance by 2 p.m., with a chance of storms

Wind: ESE at 1 mph, switching around to the south later in the day