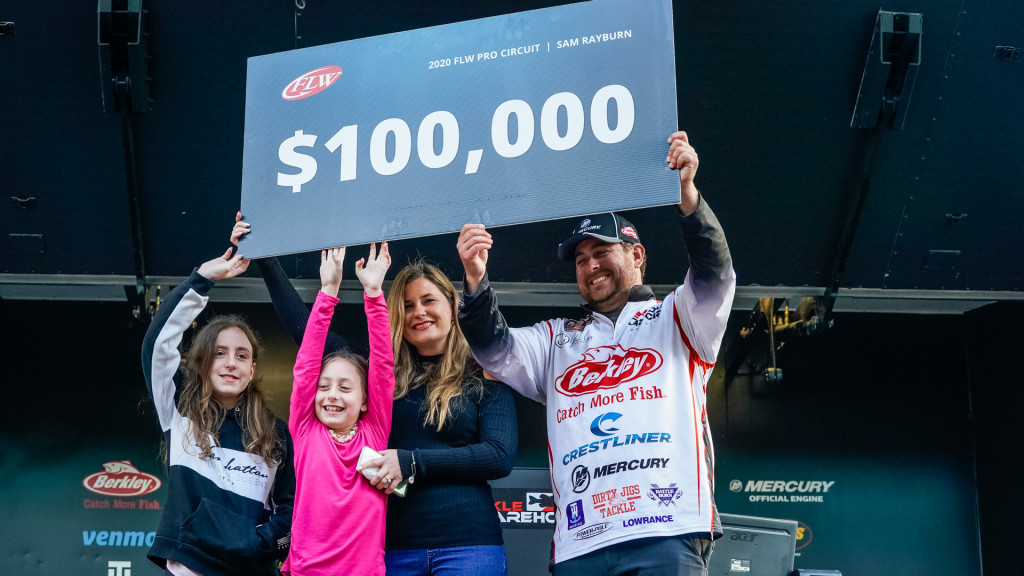 And the fact is, a lot of memorable moments have transpired, from veteran pros delivering dominant performances to young guns breaking out, plus hours of exciting fish catches on FLW Live.

In somewhat chronological order, here’s a look at 10 highlights of the year to this point. 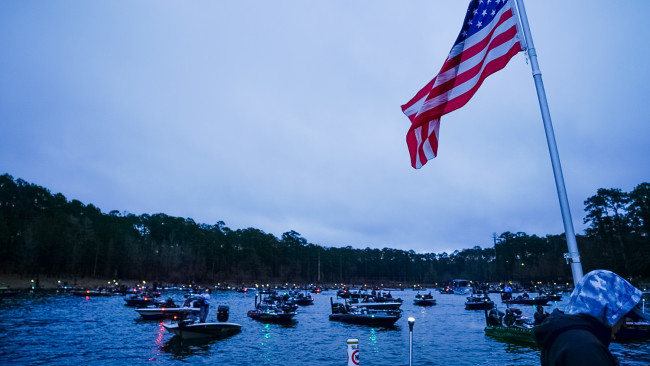 In January, FLW kicked off the inaugural season of the FLW Pro Circuit, which, as was announced shortly before the first event at Sam Rayburn, is title sponsored by FLW’s new partners at Tackle Warehouse.

The Tackle Warehouse Pro Circuit is the successor to the FLW Tour, which was an industry-changing professional fishing series that began in the late 1990s. The new Pro Circuit, with much of the same look and feel as the FLW Tour, is the future of professional fishing at FLW. It’ll also serve as the qualification route to the no-entry-fee Major League Fishing Bass Pro Tour.

Most importantly, the Pro Circuit remains a lucrative option for professional bass anglers, with six-figure payouts, major contingency prizes from sponsors such as Phoenix Boats, an exclusive 50-boat championship called the FLW TITLE, and more hours of television and live coverage than ever in the history of professional bass fishing at FLW. 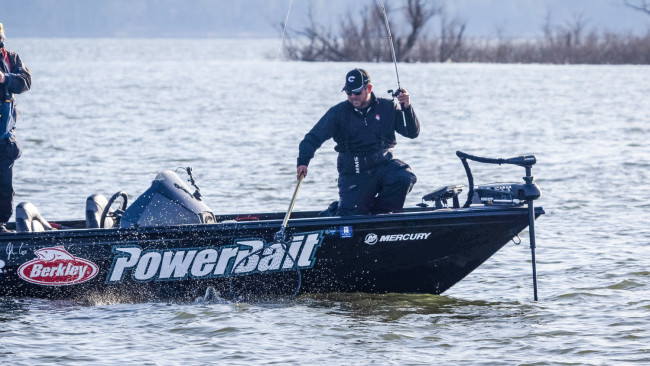 2. John Cox reaffirms what we all knew, shows us a new trick

Florida’s John Cox earned his seventh FLW victory at the season opener on Sam Rayburn Reservoir, surprising no one and reaffirming the fact that he’s easily one of the 10 (five?) best pros in all of bass fishing. Cox led the event wire-to-wire.

What’s interesting about Cox’s win this time is that he owes much of it to throwing a Berkley Frittside Crankbait the first two days, when he camped on a lone high spot within some grass to catch all of his fish. The last two days, he junk-fished in typical Cox fashion to wrap up the win.

Cox has won by relying heavily on a single area before (see his 2016 Cup win at Wheeler), but he’s not known as a crankbait fisherman. He still doesn’t act like one, either. Cox had to borrow some Frittsides from his roommate, Tom Redington, to finish out the Rayburn tournament.

Apparently, learning to throw a crankbait was one of Cox’s offseason projects. Now, unfortunately for his competition, the Tin Man has another skill with which to win tournaments.

John Cox is always entertaining, whether he’s smashing fish in 6 inches of water or oversleeping for practice, like he did before the Tackle Warehouse Pro Circuit event at Sam Rayburn. Thankfully for all of us, FLW staffer Rob Matsuura was along to document Cox’s misadventures during Rayburn practice, which obviously ended up working out pretty well for him.

4. The world meets Darold Gleason, learns what it means to “put the bunny in the box”

Last season, Darold Gleason gained some notoriety for winning a B.A.S.S. Open event and qualifying for the 2020 Bassmaster Classic. But it’s likely the fishing world didn’t really get to know Gleason until he made an appearance on FLW Live during the Sam Rayburn Tackle Warehouse Pro Circuit event, where the rookie pro graced fans with what we’ve dubbed “Gleasonisms.”

“Put the bunny in the box.” – It means to drop a good one in the livewell.

Gleason, it turns out, is sort of the class clown of bass fishing. Cutting up while on the water is just part of how this teacher-turned-fishing-guide enjoys his days in the outdoors.

It’s worth watching the Rayburn FLW Live shows to see what he’s all about:

5. Ron Nelson races out of the gate

When FLW’s media staff shared its prognostications regarding the 2020 Tackle Warehouse Pro Circuit back in late January (see it here), the very first prediction on the list was made by Digital Editor Jody White, who forecast an AOY title for Michigan’s Ron Nelson.

White might be spot on. Nelson leads the AOY race through three events with finishes of fifth, 11th and second. At Lake Martin, where Nelson finished runner-up, he lost a couple fish that might’ve won him the tournament.

It’s scary how good Nelson has been the last two seasons. He won Polaris Rookie of the Year in 2019 by finishing ninth overall on the FLW Tour, and now is the frontrunner for the AOY title on the Pro Circuit. Going back to the fifth tournament last season, which was on Lake Cherokee, Nelson has earned six consecutive top-20 finishes in regular-season tournaments. That’s stout. 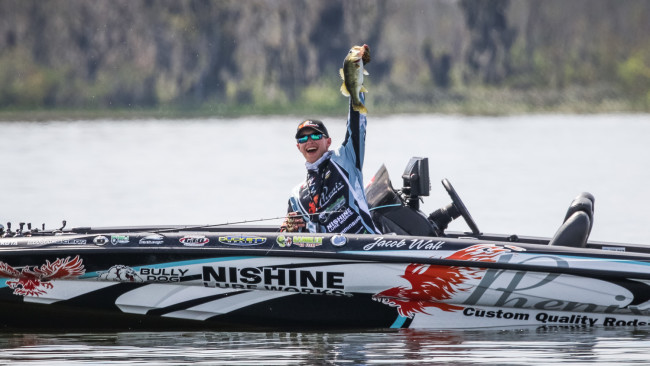 Also, in FLW’s 2020 predictions article, I said I believed that a dozen anglers under age 30 would qualify for the FLW TITLE championship event (the top 50 get to go).

Right now, there are 11 20-somethings in the top 50, so the prediction looks pretty doggone good.

The top 10 in the AOY standings is also pretty well dominated by anglers that could be considered relative newcomers to FLW’s top ranks. The only true veterans are 14-year pro Greg Bohannan in 10th and John Cox, who’s fished at the top level for 10 years and is in fourth place.

The rest of the top 10 is still pretty fresh. AOY leader Ron Nelson is in his sophomore season, as are Jon Canada (third) and Jacob Wall (seventh). Matt Becker (second) is fishing his third full season, as is Jared McMillan (ninth)

Dylan Hays (fifth) and Grae Buck (sixth) are in their fourth seasons. Spencer Shuffield (eighth) fished four seasons from 2012 through 2015, but took some time off. This is his first season back.

Granted, some of FLW’s veterans recently left to fish the MLF Bass Pro Tour, but there are still plenty of seasoned anglers down the standings looking up at a crop of fresh faces. 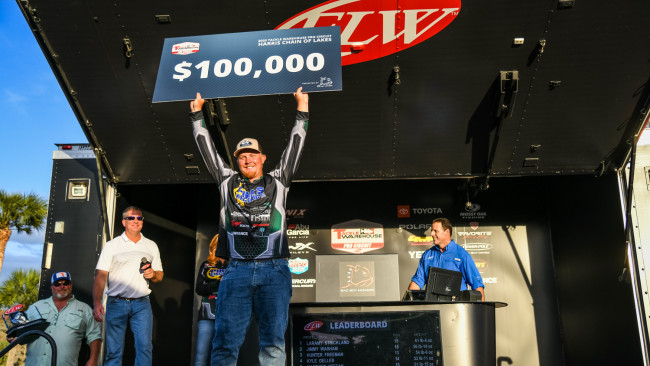 Among the young guns getting it done this season is Laramy Strickland, who, after bombing at Sam Rayburn, won the Harris Chain event and finished fifth at Lake Martin.

On Saturday at Harris is when Strickland really made some noise. Friday’s competition was cancelled due to unsafe weather conditions. Then, Strickland came out after the unexpected “off day” and blasted 31 pounds, 6 ounces. It was the biggest limit weighed in at a tour-level FLW event since John Cox caught 31-9 on day one at Toho in 2019. The big bag propelled Strickland all the way from 35th to first – a lead he would never relinquish.

Best of all, FLW captured the entire thing on a GoPro. Have a look for yourself:

Matt Becker is having a big year. He’s second in the Tackle Warehouse Pro Circuit Angler of the Year race, but besides that, he’s churning out some baller YouTube content, including a video of one of the wildest fish catches you’re going to see this season.

The catch went down on day three at Lake Martin, when Becker hooked a fish on light line and had to work his way under, over and around multiple parts of a dock structure to land the fish.

Rather than try to describe the scene, here’s the video so you can see for yourself:

The Tackle Warehouse Pro Circuit roster at Lake Martin totaled 150 pros, and every one of them managed to catch a five-bass limit each of the first two days. That’s 300 limits caught in two days of trying in what was one of the most action-packed catch-fests in FLW history.

That said, if you scan the results from the Lake Martin event, you’ll see one “(4)” listed next to David Wootton’s day-two weight, indicating he weighed in only four keeper bass.

Wootton actually caught five keepers that day, but as he was exiting his boat to head for the stage, he didn’t notice that one of his fish escaped his weigh bag. Oops.

You’ll also see zeroes next to T.R. Andreas’ day-two weight, even though it shows a “(5)” for total fish weighed. Andreas also caught five keepers on the second day, but because he was more than 15 minutes late checking in, he was forced to take a zero for the day.

Regardless, it was one heck of a tournament, and a few ounces meant the difference in a lot of dollars earned for many of the anglers.

Tennessee’s Jason Abram, who’s fished at the pro level with FLW for 11 seasons, came out on top at Lake Martin by a slim margin of only 1 pound, 1 ounce – a single fish. That’s what made the difference for Abram in fulfilling what he says has been a lifelong dream.

There are positives and negatives to be found in the current COVID-19 pandemic that has its grip on the world. Obviously, there’s a lot of pain and suffering going on right now, and plenty of uncertainty to keep everyone worried. But if there’s a silver lining, it’s in society’s willingness to come together – by keeping its distance – in order to slow the spread of the virus. There’s already been great sacrifice from businesses and individuals who have essentially shut down their lives for the good of everyone.

Social distancing is definitely the new hot topic among the fishing community this spring instead of the usual talk about the spawn. People are staying home, FLW and MLF have postponed tournaments, and the heroes working in our medical facilities and other essential businesses are hard at work fighting back on our behalf.

Everyone at FLW is thankful for the patience of bass fishing fans during this trying time, and wishes for everyone to stay healthy and happy as we work through this together.

Like you, we’re absolutely ready to get back to fishing, but not until it’s safe and appropriate. In the meantime, here’s a compilation of video updates from FLW pros sharing how they’re passing the time while under quarantine: