Top 10 Locked for Championship Round 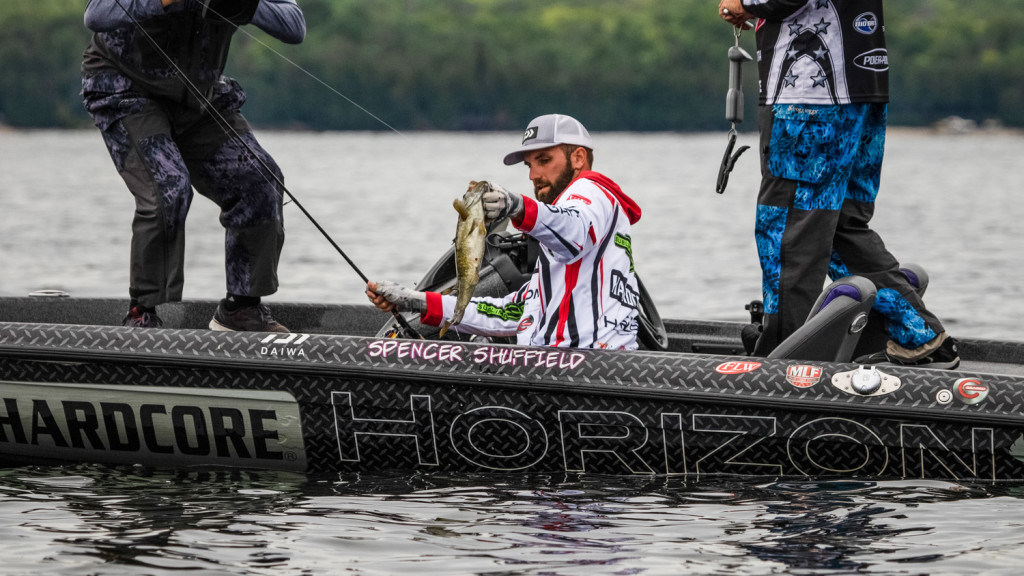 With cooler, windy and rainy conditions for the Knockout Round of the Tackle Warehouse TITLE presented by Toyota it was down to the top 20 pros (the top 10 from Group A and B) to duke it out on Sturgeon Bay. With the weights zeroed from the Qualifying Rounds, 10 spots for Saturday’s Championship Round were up for grabs when the anglers started fishing this morning.

Stealing the show on Friday, Spencer Shuffield continued his smallmouth dominance snatching 25 fish worth 86 pounds, 13 ounces to easily keep him in the hunt for the $200,000 TITLE payday. That being said, there were several anglers dialing in the smallmouths today, which led to the most total weight put up of the week and a lot of separation between the top 10 pros and the rest of the pack.

The first period is where the bulk of the anglers did their damage, with over 413 pounds of bass put on the scales. Though heavy rain moved in to start the second period, that didn’t dampen the bite much and by the end of the day 252 smallmouths were recorded on SCORETRACKER®.

Post-frontal conditions will welcome anglers in the final round tomorrow as strong winds and cooler temperatures are in the forecast. With the weights zeroed, the top 10 anglers will have to adjust yet again as they battle it out for a shot at becoming TITLE champion. 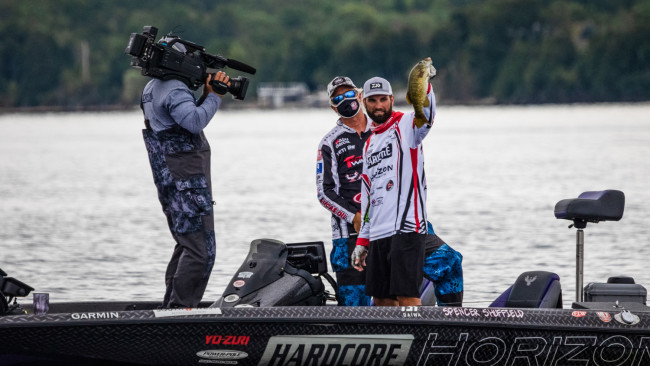 After catching 33-1 in the final Qualifying Round for Group B, Shuffield got dialed in and expanded on some areas for his solid performance in the Knockout Round.

“I’m excited about tomorrow,” says Shuffield. “I know it’s going to be windy. The conditions are going to be tough. But today has been my best day on the water. I feel like I got really dialed in, big time.”

Shuffield spent the majority of his afternoon looking for new water to fish during the Championship Round and he thinks he found it.

“We found some special stuff today,” he adds. “Tomorrow is going to be one of them special days. As many [spots] as I found, I think we can drift through these areas with the wind and be able to catch them. I can’t wait to get out here in the morning and get started. Hopefully we can win us a tournament.” 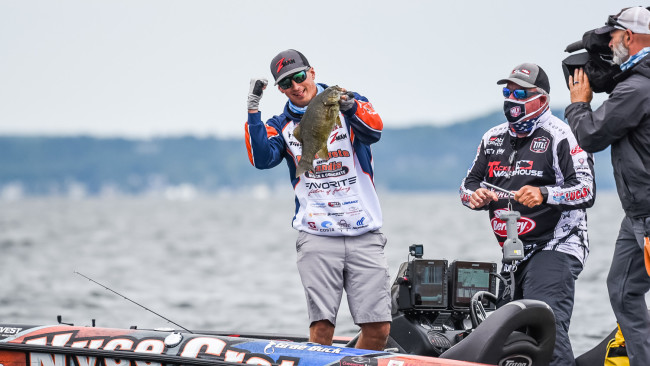 Though Shuffield caught the most weight today, those behind him weren’t slackers, and Joey Cifuentes, Grae Buck, Bradford Beavers, Casey Scanlon and Rusty Salewske caught more than 60 pounds and posted their best day of the week today. The smallmouth bite was good today, and all of them seem to be getting more in tune with the fish as the week has gone on. Mostly fishing shoals and points at a variety of depths, they should have plenty of water to themselves in tomorrow’s final round. 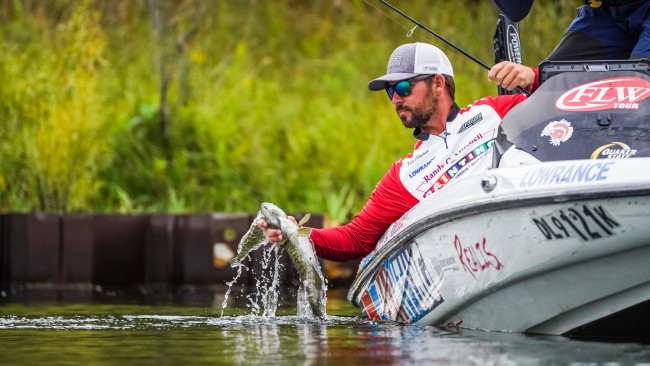 Kurt Mitchell and John Cox gravitated to the same area and despite fishing in separate groups have made a few small stretches Sturgeon Bay work for five days in a row. While the bite is highly current-dependent, both know the potential.

“It’s not something you can really prepare for,” Mitchell says of where the fish position from day to day. “You’ve just got to come out here and keep an open mind.”

Meanwhile, Kyle Hall and Evan Barnes have been probing the area around Sister Bay. Though Hall found out this morning that Buck also knew about the juice he’d been fishing.

“It’s been a little intense actually,” Hall says of sharing water. “Grae made a little sneak attack on me this morning. He got to the exact rock I wanted to start on. He caught four or five on the first five drops. We’ve just kind of been poking around here together.”

The weather tomorrow could be the biggest game-changer and even though the pros can trailer and launch at any public ramp, it doesn’t mean the fishing will be easy.

“I think the X-factor is going to be the wind,” says FLW Live analyst Marty Stone. “If it all gets blown out (the lake), you have to throw John Cox in there and Mitchell as well because they’ve got the experience in the [protected area of the shipping channel].”

The top 10 anglers from Friday’s Knockout Round will compete for the TITLE champion’s belt on Saturday along with the $200,000 check. All weights from their Knockout Round competition will be zeroed.

The forecast for Saturday calls for winds out of the northwest at 15- to 20-mph. That will certainly change things up as it’ll be the first time the wind has blown that direction all week and certainly will be the strongest wind we’ve seen during competition.

Watch all three periods of the Championship Round of the TITLE via the FLW Live stream, which will be hosted at www.majorleaguefishing.com. Click on the WATCH NOW link in the blue bar at the top of the page.