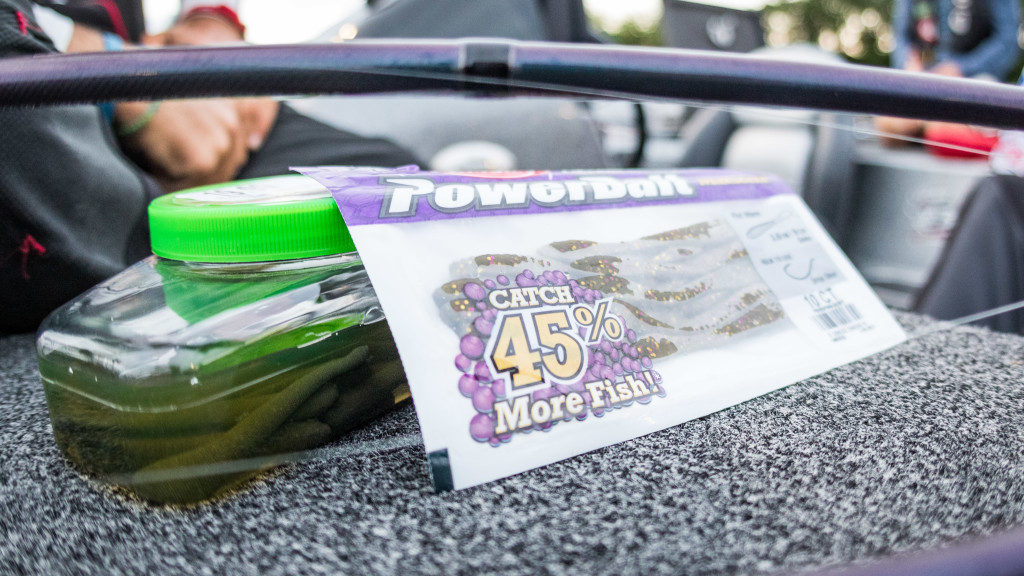 Summertime smallmouth fishing makes having a drop-shot or two on the deck pretty essential, and the top pros in the Tackle Warehouse TITLE presented by Toyota on Sturgeon Bay basically all relied on the versatile finesse rig to get the job done. However, between them, there was a decent amount of variation in baits, and a few pros actually branched out from the drop-shot into other techniques.

Here’s what did the dirty work for catching masses of Great Lakes smallies. 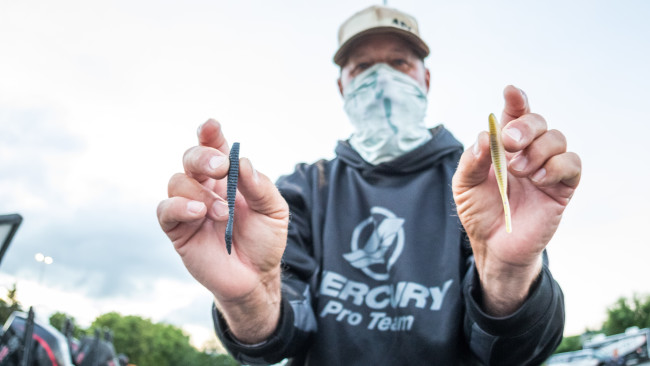 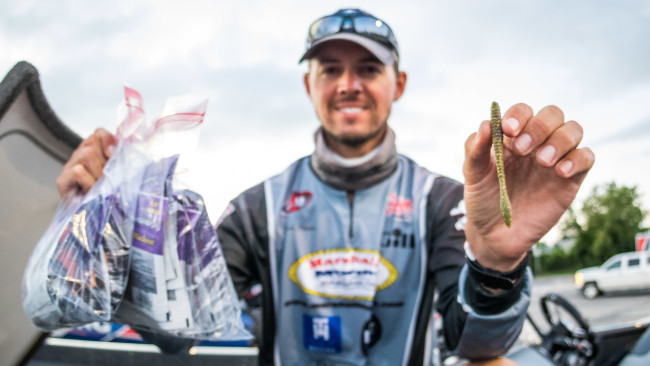 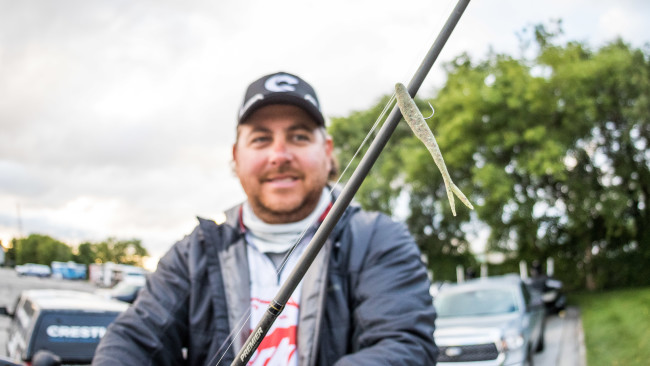 3. One of the elite smallmouth anglers in the country, John Cox mixed between a Berkley PowerBait MaxScent Flat Worm and a 4-inch Berkley PowerBait MaxScent Flatnose Minnow. Cox used the Flat Worm when the fish were relating to the bottom and to gobies, and he used the minnow when schools of alewives would pass through his areas. He mostly used the brown back color for the Flatnose and used the same color for the Flat Worm when it was sunny, but went to a black color when it was cloudy. Later in the event, when he was running low on baits, Cox mixed in baby bass and watermelon red colors.

For tackle, Cox used both a  7-foot Abu Garcia Fantasista Premier rod with an Abu Garcia Revo Premier reel and a 7-foot, 2-inch Abu Garcia Winch spinning rod with an Abu Garcia Revo MGXtreme reel. Cox used 6-pound-test Berkley FireLine Crystal for his main line with a 6-pound-test Berkley Trilene 100% Fluorocarbon leader. He used 3/8- and 1/2-ounce weights and both a No. 2 Berkley Fusion19 Drop Shot to nose hook his baits and a No. 2 straight shank hook that he threaded his baits on. 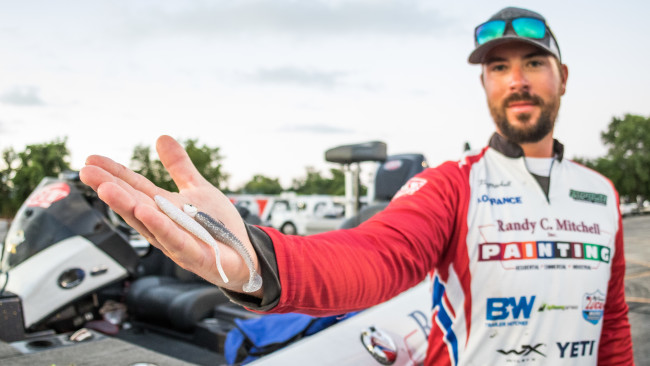 4. Kurt Mitchell weighed 119 pounds, 10 ounces on day one and did all his damage with a 4-inch Yamamoto Shad Shape Worm on a drop-shot and a 3.3-inch Keitech Swing Impact FAT on a 3/8-ounce Dirty Jigs Matt Stefan Guppy Swimbait Head. 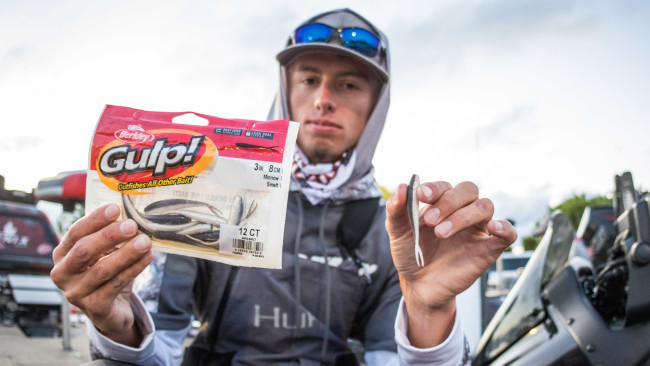 5. Going with Gulp! was the ticket for Kyle Hall, who tipped his drop-shot with a 3-inch Berkley Gulp! Minnow (smelt) most of the time, and a Berkley PowerBait MaxScent Flat Worm (goby) some of the time. For his rig, he used a No. 2 Owner Mosquito Light hook and a 5/8-ounce weight. His rod was a 7- foot, 1-inch, medium-power Odiehammer, and he used a Stradic Ci4, 10-pound-test Berkley X9 braid and 8-pound-test Berkley Trilene 100% Fluorocarbon for his leader. 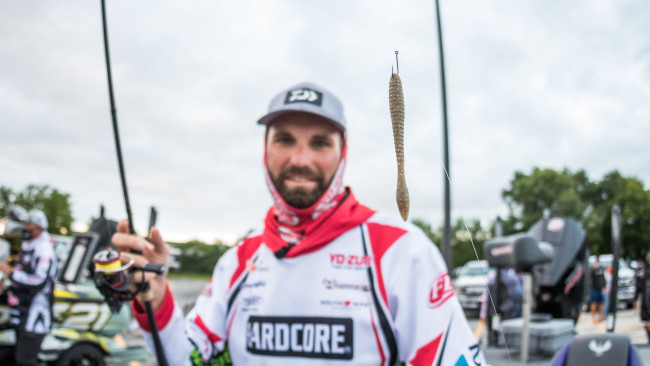 6. Putting together yet another fantastic smallmouth tournament, Spencer Shuffield used a  Berkley PowerBait MaxScent Flat Worm on a drop-shot paired with a No. 1 Gamakatsu Drop/Split Shot hook and a 1/2-ounce Ark No Chip Tungsten Drop-Shot Weight. He threw it on a 7-foot, 2-inch medium-action Phenix M1 rod, Daiwa Ballistic LT reel and 15-pound-test Yo-Zuri SuperBraid and an 8-pound-test Yo-Zuri TopKnot Fluorocarbon leader 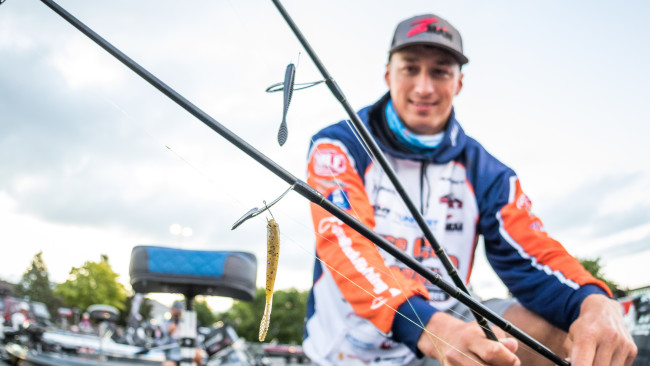 7. Bucking the MaxScent trend, Grae Buck dropped a 3.5-inch Z-Man Trick ShotZ to his smallies. Using black in the morning and goby Bryant in the afternoon, Buck piled up the smallies, and usually started very hot. His hook was a No. 2 Hayabusa DSR132 and he used 1/2- and 3/8-ounce Eco Pro Tungsten Full Contact Drop Shot Weights. 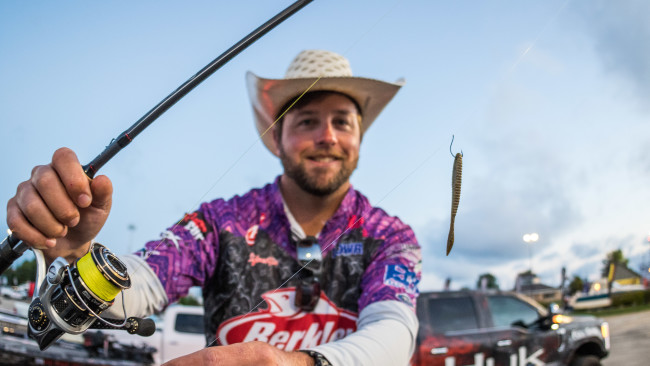 8. Also sticking with a Berkley PowerBait MaxScent Flat Worm, Joey Cifuentes alternated between the green pumpkin and brown back colors, going with brown back when he felt like there was more bait in the area. For his tackle, Cifuentes used a 7-foot, 2-inch Abu Garcia Winch spinning rod, an Abu Garcia Revo Premier spinning reel, 15-pound-test Berkley X5, a 6-pound-test Berkley Trilene 100% Fluorocarbon leader and a No. 1 Berkley Fusion19 Drop Shot hook. For a weight, Cifuentes alternated between 1/4- and 3/8-ounce, but found that the fish reacted better to the heavier weight. 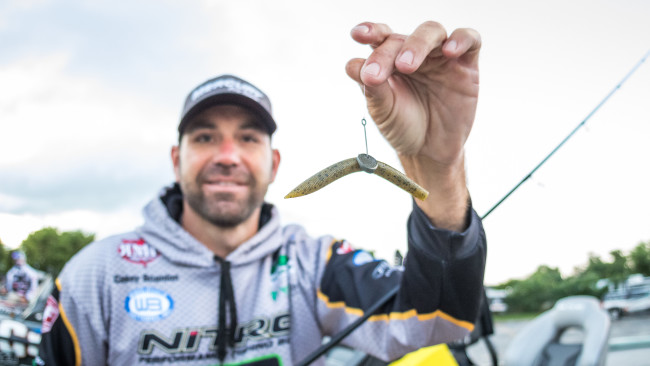 9. Mixing in a wacky rig, Casey Scanlon used a Berkley PowerBait MaxScent Flat Worm on a drop-shot and a 4-inch Bass Pro Shops Stik-O with a 3/32-ounce Trophy Bass Company Wacky Weight. He used a 1/0 Hayabusa WRM962 for his wacky rig and the same hook in the No. 2 size for his drop-shot. Scanlon fished both baits on 10-pound-test Maxima braid with an 8-pound-test Bass Pro Shops XPS Fluorocarbon leader. 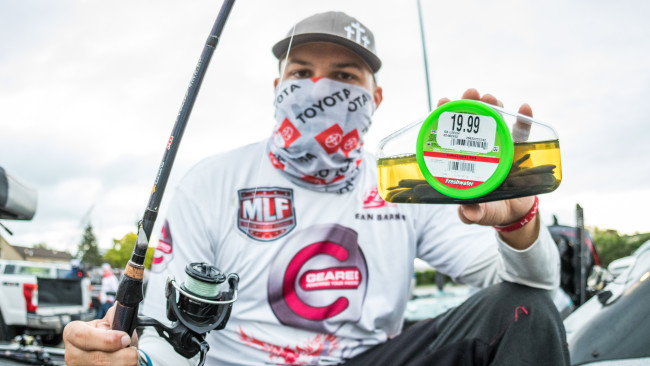