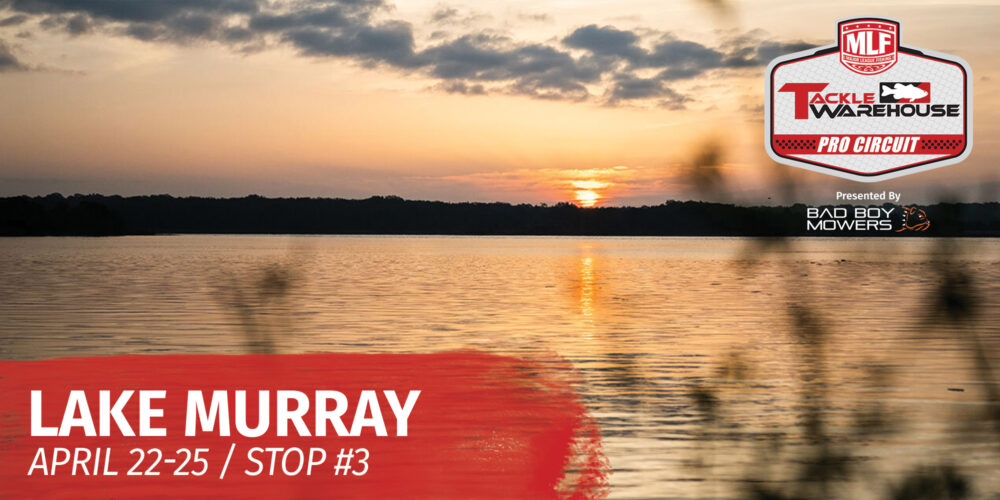 Stop No. 3 of the Tackle Warehouse Pro Circuit Presented by Bad Boy Mowers season leads us to the “Jewel of South Carolina” – more commonly known as Lake Murray for a tournament presented by Googan Baits. Murray has been the site of several FLW Cups in the summertime when the fishing has been somewhat tough. But this year, we get to see what Murray really has to offer as there should be both postspawn and spawning fish on the docket.

Lake Murray was formed in 1930 when construction on the Dreher Shoals Dam was completed and the Saluda River began to flood into the creeks and lowlands of the surrounding area. Eventually, the floodwaters created the reservoir that has since been dubbed the “Jewel of South Carolina.”

Situated between the Blue Ridge Mountains and the Low Country, Murray sprawls some 50,000 acres and is typical of reservoirs found in central South Carolina: red clay banks, little submerged vegetation, ample docks and water clarity ranging from very clear in the lower end to nearly muddy in the upper end.

Emergent bank grass does grow along some shorelines, and there’s wood cover along banks where the ground has eroded away and trees have fallen off into the water. In addition to the shoreline cover, there are also plenty of planted cane piles and brush piles to hold bass in deeper water.

Most of the past history on Murray is in the summertime during FLW Cups with the most recent being Justin Atkins‘ win in 2017. Atkins exploited the numerous cane piles on Murray with an ima Little Stick 135 throughout all three days of competition to sack 59 pounds, 4 ounces. The majority of the top pros did something similar by chasing schooling fish across the lower portion of the lake.

Before that, Anthony Gagliardi won the Cup in 2014 chasing schooling fish to tally 51-2 and win by 1 ounce in front of his hometown fans. Others in that event did something similar, though, there were a few more pros cashing in on a shallow bite near emergent vegetation. Doing something completely different, Steve Kennedy ran up the river to target a mayfly hatch and nearly won the tournament doing so.

Back in April of 2012, Ryan Patterson won the Abu Garcia College Fishing National Championship while fishing solo on Murray. The Kansas State angler ran a herring-based pattern on roughly six areas that consisted of saddles on the back of main-lake islands or isolated cover on barren points. He hauled in 46-15 over three days in the process.

One of the best glimpses at what swims in Lake Murray was another Gagliardi win in February of 2006. The South Carolina pro tallied 89-2 over four days, with a 26-pound bag on day one and a 28-pound limit on the final day. For the big bags, he had a one-two punch of cranking shallow and dragging a jig and shaky head on offshore brush and rocks. Giving Gagliardi a run for his money, Tim Carroll weighed 28 pounds on day one and 30-15 in the final round.

The Phoenix Bass Fishing League presented by T-H Marine has swung by Murray off and on throughout the years – most of which has happened in late winter and early spring. In those tournaments, it has taken bags in the mid-20s to win and we’ve seen crankbaits, jigs and spinnerbaits be the biggest players.

Aside from the possibility of some 20-pound bags, expect to see some classic late spring and early summer patterns play out. There’s a good chance there will still be some fish on beds, though the majority should be postspawn and looking to feed.

Bream beds, the shad spawn and fry guarders will all be factors on Murray in April. The herring should also be spawning, so you can bet there will be bass hunting down those tasty morsels on clay points in the lower portion of the lake.

Cane piles and offshore structure could receive a fair bit of attention, especially by anglers who are looking for bigger fish that may have spawned early and already recovered from the spawn.

On the shallow side of things, look to see plenty of jigs, Texas rigs, ChatterBaits, spinnerbaits, swim jigs and various topwaters. You can also bet a floating worm will account for plenty of bass, too.

If there are some spawning fish, a drop-shot, Texas rig, Ned rig or shaky head will do the job.

Swimbaits, flukes and walking topwaters will likely be the choice for those chasing any schooling fish. And don’t overlook the possibility of someone dragging a Carolina rig around offshore. Michael Wooley did it in August during his Top 10 performance in the FLW Cup back in 2014 and it wouldn’t be surprising for someone to tap into that for a key fish or two this time.

Murray is a lake that has big fish in it but hasn’t ever shown its true colors during any of the past FLW Cups. This time, however, we should be in a prime window for the lake to show just how many 4- and 5-pounders swim in it. Mid- to upper-20-pound bags are entirely possible in this pond and this could very well showcase some of the best bags of largemouth all year.

Another thing to watch for is the fact that cane piles were the talk of the town after Atkins’ Cup performance, and though they may produce this time around, a good old fashioned bank tournament could play out. In an age where electronics are accounting for more and more fish caught in tournaments, this derby could have an “old school” vibe where pros just put the trolling motor down and run the bank.