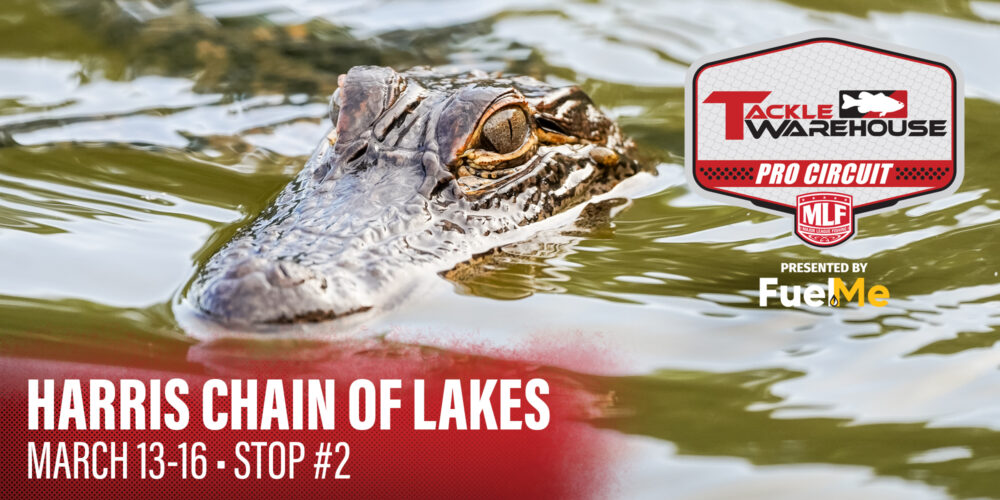 LEESBURG, Fla.– Bass Boat Technologies Stop 2 on the Harris Chain of Lakes Presented by Frogg Toggs is the near-annual annual pilgrimage to Florida, which is always fun for fans and anglers alike. Flip flops will be key, and over the years the Harris Chain has proven to be one of the best tournament systems in Florida, with a high ceiling and more consistent fishing than one usually finds in the Sunshine State. At the Harris Chain, the offshore bite is usually a big player, but it’s far from the only thing going, as folks like Laramy Strickland and Glenn Browne have proven.

The Harris Chain is a collection of lakes in central Florida that includes Lake Harris, Lake Apopka, Lake Griffin, Lake Eustis, Lake Dora, Lake Carlton, Horseshoe Lake, Little Lake Harris, Lake Denham and Lake Beauclair. In all, the pros have the run of 10 lakes, plus the myriad residential canals, rivers and backwaters that spread out from them.

The Harris Chain isn’t quite the typical Florida fishery like Kissimmee or Okeechobee. The water is generally dirtier, and there are a lot more canals and the like leading off the lakes. However, like the Kissimmee Chain, there can be significant travel times associated with longer runs, mostly because many of the canals between the lakes are no-wake.

With the event taking place in March, local Tim Frederick reckons that the usual prespawn and spawn patterns won’t be the ticket.

“Depending on the weather, mid-March, it’s mostly going to be a postspawn deal or shad spawn type deal,” Frederick said. “I think people are going to spread out a whole lot more than they normally would. It’s not going to be 25 boats in one flat of grass, I think you’ll see a lot more people fishing all the lakes.”

Generally, the presence or lack thereof of offshore hydrilla is key on the Harris Chain. This year, Frederick said it is pretty slim pickings in every lake outside of Griffin, which might mean no single lake gets the bulk of the pressure. In last year’s March Toyota Series event, anglers made the Top 10 out of at least five of the lakes in play.

Because the bite ought to be out of the spawn phase, Frederick thinks the shad spawn will play a big role in the event and the usual warming effect of the afternoon sun won’t matter much.

“I think the first couple hours of the morning are going to be crucial,” said Frederick. “I’m not saying you can’t catch big fish after that, because you can, but it’s going to be important to catch that quick limit. You’ll get a few more bites during the day, but if you’re at noon and you’ve only got two fish, you might be in trouble.”

One of the best examples of a shad spawn leading to a win was when Chris Johnston won in late February of 2018. Then, the Canadian pro waylaid bass at sunrise on a hydrilla wall in Harris. Last year’s Toyota Series event demonstrated that even with a shad spawn going, it’s not the only thing. While Jordan Thompkins won cranking a hard spot, Michael Conley caught some deep spawners and a few pros ran brush.

Along that diverse line of thinking, Frederick notes an additional pattern that could play.

“Mid-March, if it stays warm, bluegill beds could play big, actually,” Frederick said. “I look forward to it, it’s not going to be the same old, same old.”

The Harris Chain has more variety than the typical Florida fishery, and you can expect to see that reflected on the front deck at takeoff. Crankbaits and Carolina rigs will catch offshore bass, and swimming worms and vibrating jigs are always essential there. For a shad spawn, topwaters and swim jigs could get a workout as well.

Additionally, a jerkbait has done a lot of damage at the Harris Chain recently. Plus, spawning bluegill could make for a good frog bite, and you can never count out flipping and punching in Florida.

The 2022 Pro Circuit field boasts a stunning 19 pros from the Sunshine State. So, if you want to go local, you’re going to have too many options. From established stars like John Cox and Bobby Lane to the McMillan brothers, Frederick, Randall Tharp, Trevor Fitzgerald and Laramy Strickland, you’ve got a massive pile of talent to sift through. Of course, that’s without even counting Chris Lane, who may live in Alabama, but certainly has plenty of Florida chops, including a 2012 Bassmaster Open win on the Harris Chain when he made the rest of the field look foolish.

Outside of Floridians, there are a lot of other interesting options. Folks like Brett Hite, Josh Weaver, and Braxton Setzer have demonstrated a real knack for the Harris Chain and offshore Florida grass in general. Plus, you’ve got tons of pros that have made impressive cuts in the past on the Harris Chain with anglers like Jimmy Washam, Miles Burghoff, Matt Stefan and rookies Nick Hatfield and Lance Oligschlaeger.