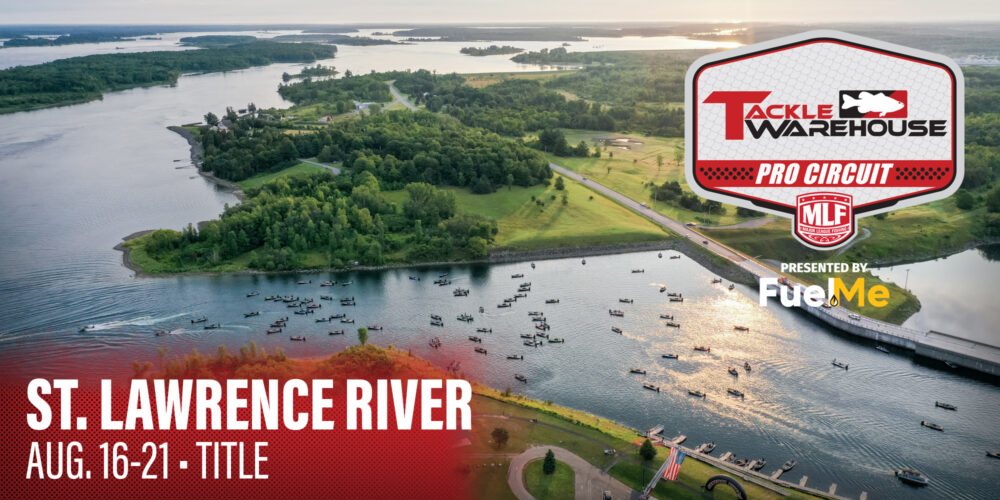 The championship of the Tackle Warehouse Pro Circuit Presented by Fuel Me, the Tackle Warehouse TITLE Presented by Mercury heads north for the third year in a row, this time to the smallmouth Mecca that is the St. Lawrence River. One of the best smallmouth fisheries in the world, the St. Lawrence drains the Great Lakes and is a challenging and unique body of water with a lot to offer the pros fishing the TITLE.

In 2020, the TITLE was a catch, weigh, release event, and huge numbers of smallmouths were caught. In 2022, the TITLE will be the same format it was in ’21 when Jimmy Washam won on the Mississippi River.

As is usually the case in Major League Fishing format events, the field will be split into groups over the first four days of the event in the Qualifying Round. Then, the winner of each group will advance to the Championship Round and pros who finish in second to 10th place in each group will battle it out with zeroed weights in the Knockout Round. Then, the top eight pros from the Knockout Round, plus the two group leaders, will fish with zeroed weights again on the sixth day of the event, which is the Championship Round.

The St. Lawrence River has been hit hard by major events the last few years, but it still produces top-tier bags of smallmouth on the regular. Though Lake Ontario takes a lot of the shine when in play, the river itself is no slouch.

Taking out of Massena, the anglers will have the run of the river, but won’t be allowed to lock downstream into Lake St. Francis or run out into Lake Ontario proper. With the lake truly out of play, it puts the focus on the river itself, which isn’t a bad thing to hone in on. The river has almost everything you could ask for in a northern fishery. There’s grass both deep and shallow, docks, tons of rock piles and current seams, sand flats, boulders and more. The focus of the event will be smallmouths. Though a pile of green fish can be caught on the St. Lawrence, it’s not usually the route to a winning bag, as the river has a simply stupendous number of 4- and 5-pound smallmouth.

Hailing from Waddington, New York, Jonathan Robla made the cut in last summer’s Toyota Series event at the St. Lawrence and is a river expert. He figures a good tournament is on tap.

“What I love about the St. Lawrence is, really, if you want to fish shallow you can fish shallow, if you want to fish deep, you can fish deep,” Robla said. “I think by August, a lot of those shallow fish that are shallow all the time, they’ve been toyed with so much. It’s hard, you’ve gotta get way out and stay off ‘em quite a bit and trick ‘em into biting. The deep fish, if you find them, and you’re around them when they’re eating, they’re gonna bite.”

Last year, big bags came from all sections of the river. In the postspawn, when the Pro Circuit hit it, Matt Stefan and John Cox made the cut fishing near Massena, while Cody Pike and most of the others in the Top 10 made the run toward Clayton. Later in the year, for the Toyota Series event, the winners ran to the lake, but the rest of the Top 10 were scattered from within sight of the ramp down to Clayton.

Robla thinks that part of the reason certain stretches get hot while others cool off is because the entire river isn’t uniform. Different stretches give anglers better opportunities at different phases.

“It comes down to how the fish set up, and at certain points in the year they’re easier to catch,” Robla said. “They were transitioning at Clayton (during the Pro Circuit), and they were a lot easier to catch. Once the majority of them drop deep, it gets a little bit harder, because they can be on a 50-foot flat with a couple boulders or out roaming. But, every part of the river is a little different – down at Clayton, you have shallow stuff, or you have super deep stuff. A lot of them are on the steep drops, which are super hard to catch them on. Coming out of the spawn, they stay up closer to the top of those drops a little bit longer and it’s really good then.”

In August, the spawn should be totally over, and fish are likely close to the most consistent they’ll be all summer. If things go right, it could be a slugfest.

“August can be really good, or a bit tough,” says Robla. “When the (Elite Series) came at one point, I remember watching Matt Lee catch like 27 pounds off one of my offshore spots that I had fished for years and years. They hit it just perfect that time of year – they were deep and ready to eat.”

Ned rigs and drop-shots will be the main players for deep fish. Dragging and drifting for deep smallmouths on the bottom in the river is a mainstay and come summer it’s very often the best way to get it done.

One extra that Robla recommends is a Carolina rig with a craw or something like a Keitech Crazy Flapper.

“I have a love-hate relationship with it on the river,” Robla said. “It’s not the best presentation for moving water, but it works if they eat it. A lot of times it’s like they just swim with it and drop it. The ones you hook with a C-rig, for some reason, they’re bigger fish – nine out of 10 times, you’re catching nice fish with it.

The shallow side is where the real variety comes into play. There, you’ve got all sorts of options like spy baits, swimbaits, jerkbaits, hair jigs, drop-shots and even topwaters. If you’ve seen Scott Dobson’s deck at the end of a day chasing smallies shallow, you know a lot can go into tempting the fickle critters.

Obviously, everyone in the TITLE can contend – not only do you have to be really good to qualify, but a small field gives everyone a chance.

With Grae Buck, Justin Lucas, Kurt Mitchell, Matt Becker and Ron Nelson in the field, there are some definite smallmouth experts in the field. While Lucas knows the river really well on the deep side, Nelson is one of the more interesting prospects to catch them shallow.

Outside of the brown bass experts, there are some other pros in the field who have done really well up north lately and have experience on the river. Skeet Reese is probably chief among that group, but Michael Neal, Spencer Shuffield, Jon Canada and Joey Cifuentes (who needs some revenge on the river) shouldn’t be counted out either.