Cifuentes Smashes 24-2 to Extend Lead on the St. Lawrence 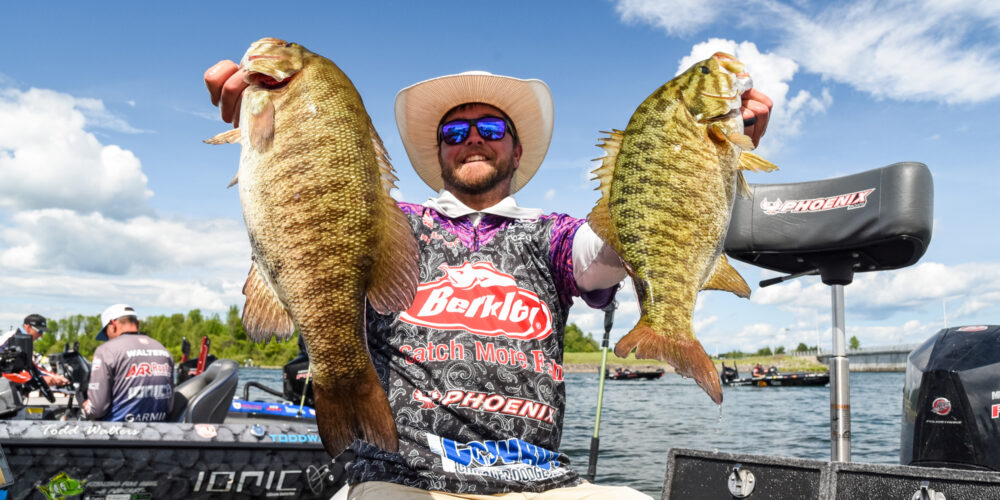 Smallmouth derbies usually come down to ounces. Joey Cifuentes seems to have no intent on letting that happen in the Tackle Warehouse Pro Circuit Presented by Bad Boy Mowers event on the St. Lawrence.

“[Two bags over 24 pounds in three days] is unbelievable,” said Cifuentes. “I don’t even know what to say. I’m in hog heaven as we say in Arkansas.”

That’s an understatement considering the pigs he’s catching this week, as both big bags had fish over 6 pounds in them. But here’s the scary part about today: Cifuentes didn’t make a cast on his area he caught all his weight the previous two days.

He had been fishing deep humps near Frontenac, but he decided to expand and start in some new water near Clayton. The first spot produced the 6-pounder, and everything just clicked from there.

“After that big one, I hadn’t fished shallow all week,” said the Arkansas pro. “I decided to try it and went to a shallow spot where I’d seen some fish swimming around in practice. I caught a pair of 5s. Then I went back out deep and caught a 3-pounder and a 2.5-pounder. After that, I got gas and left to run back up.”

However, despite already having a solid bag, leaving as early as he did allowed him to stop and bounce to fish his way back. Most of it was fruitless, but right near takeoff he had one more area he wanted to try. He was rewarded with 4- and 3-pounders to pad that lead even more.

After a day like today where both shallow and deep worked on all stretches of the river, Cifuentes is understandably excited about what he can do tomorrow.

In reality, he admits he may have too many options, as he feels the shallow fish he found could provide some another mega bag. But then so could his deep fish, where his 6-pounders have come from. He says tomorrow’s forecast of rain and colder conditions will dictate what and how he’ll fish, but he has no shortage of confidence he can crack an even bigger final-day bag if the fish cooperate.

Then again, those fish are smallmouth, and even some of the best struggle with them, as showcased by pros like Ron Nelson and Scott Dobson both having frustrating days with stubborn brown fish today.

“I’m so excited but I’m also nervous,” said Cifuentes about tomorrow. “I’ve never been in this situation before leading going into the final day. To me, [that 6-12 lead] is a nice cushion for error if I struggle. But I’m just going to go out and go fishing. Whatever happens, happens. I’ve had a blast.”

On the Angler of the Year front, Michael Neal secured the coveted award today by catching 18-8 to finish 11th in the tournament and solidify his name in the record book. Neal held a 22-point lead over Skeet Reese coming into the event, so despite Reese dropping 24 pounds today to make the Top 10, Neal did what he needed to in order to bring the trophy back to east Tennessee.