LeBrun Surges to Top on Day 3, Final 10 Set for Championship Day on the James River 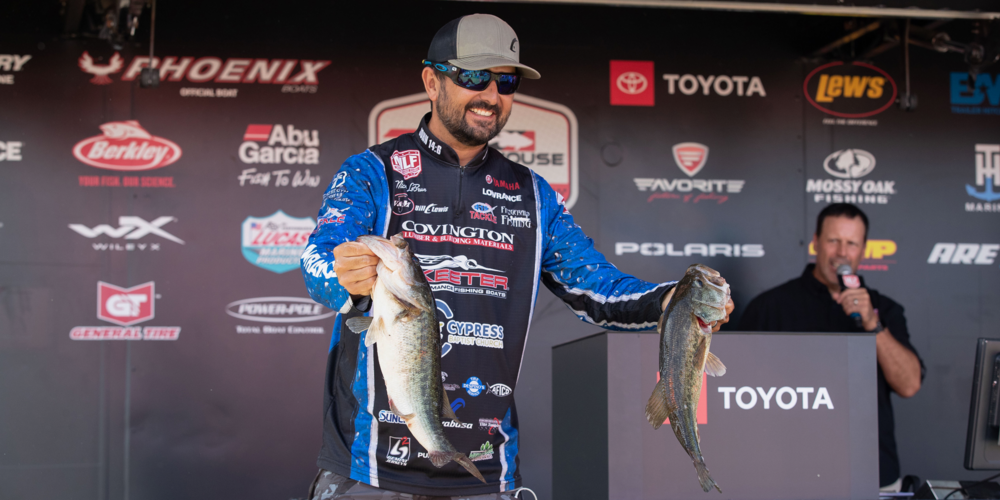 RICHMOND, Va. – The picture is becoming clearer at Toyota Stop 5 Presented by PowerStop Brakes on the James River. We can surmise now that the weights are tight and that the remaining 10 anglers are all on roughly the same caliber of fish as Day 3 leader Nick LeBrun was just over 2 pounds ahead of the last man in, rookie Cole Hewett.

LeBrun posted another consistent day – 16 pounds, 6 ounces – and led the pack with 47 pounds, 11 ounces over three days at the Tackle Warehouse Pro Circuit Presented by Fuel Me event. Weights reset to zero for the final 10 on Sunday, so considering how close the weights have been and how the final 10 anglers are fishing the James, it’s truly anyone’s game.

LeBrun Lays Claim to No. 1

Just one month removed from a win at Stop 4 on Lake Guntersville, LeBrun continues to be red-hot. He’s capitalized on a solid morning bite all three days to post totals of 15-11, 15-10, and 16-6 to put himself in position to shoot for the third back-to-back win in the circuit’s 26-year history. The Louisiana pro has laid off his fish each day to conserve his area, but he won’t need to on Sunday.

His starting spot on the Chickahominy River has been good all week, but it was exceptional this morning.

“The day started great, I made the 45-minute run down to the Chickahominy and nobody was on my spot,” LeBrun said. “I got set up, Power-Poled down and made a cast with a crankbait and had a 2 1/2- and 3 ½-pounder at one time. They each had one barb of my Hayabusa trebles in them, but I got them in. I’ve never done that in a tournament, but usually, when you do that, they’re peanuts and not good ones.”

LeBrun describes his areas as a current seam with a plethora of fish that he says are released fish from other tournaments.

“There are a lot of fish in there and it seems like they’re replenishing,” he said. “They’re all quality tournament fish because you can see the cull tag holes on a lot of them. It’s a hang-up spot where they’re holding, I just don’t know where they’re coming from.”

In addition to his crankbait, LeBrun learned today that they’ll also bite a V&M Chopstick. Interestingly, he feels that the early morning bite may trump the tide flow in this area.

“In practice, it was dead low when I would get all of my bites and now it’s better on the outgoing during the tournament,” he said. “I don’t know if it matters because I think they are just fresh and biting early in the morning. I haven’t hit it past 10:30 a.m., so I’m excited to go there tomorrow and not worry about conserving fish. I haven’t caught one over 4 pounds there yet, but there are a lot of threes. I’ll cycle through there three or four times tomorrow if I have to.”

Out of the remaining 10 anglers, Alabama’s Braxton Setzer is the only one whose weight has increased daily. He began the event with back-to-back weights in the 14-pound class and added a day best 17-9 today to climb to second place with 46-14 after starting the morning in 23rd.

He credits his improvement to understanding how the fish position with certain tides and learning it better daily.

“I kind of stumbled into the right place to be for the tide window on the first day, built on it yesterday and then again today,” Setzer said. “My weights have increased, and I hope to keep the trend going.”

Setzer has made some adjustments with the changing tides each day, and shared that the afternoon bite was critical.

“I struggled until I got into the right areas and then caught some good fish this afternoon to make it a good day,” he said. “The good news is it can happen fast here.”

After catching 16-12 on Friday, Mitch Crane just about matched it with his 16-11 on Day 3 to tally 46-9 over three days. The Mississippi pro was both thrilled and surprised that he managed another solid bag.

“I feel great about today because I didn’t think I could do it again,” he said. “The first two hours while I was waiting for the tide to get right on my main area, I went to look for more places and caught some. Two fish I weighed came from places I hadn’t fished before today.”