Q&A with Jacopo Gallelli: “I Feel the Pressure Because They Expect Big Things” 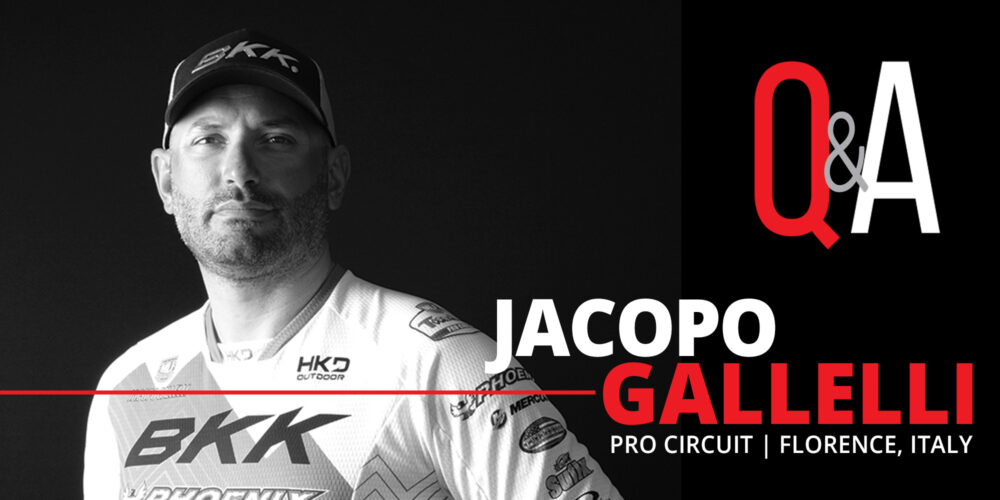 As the first European to ever compete as a professional angler in the United States, Jacopo Gallelli began his rookie year on the Tackle Warehouse Pro Circuit with mixed expectations. On one hand: he was a 39-year-old Italian angler still trying to find his way in an unfamiliar country. On the other: he was a 39-year-old Italian angler with two top 10s in 16 events with MLF, a bevy of sponsors supporting him and a burning passion for proving that catching bass is about more than which continent you grew up on.

International anglers are typically faced with a steep learning curve stateside, though Gallelli has been making a name for himself on the bass fisheries of the U.S. for a couple of years now – as evidenced by his double-qualifying for the Pro Circuit via a pair of top-10 Angler of the Year finishes in multiple divisions of the 2020 Toyota Series and a Bassmaster Classic appearance in 2019.

Gallelli further confirmed that he has the skills and tenacity to compete at the highest levels of tournament bass fishing when he claimed the Pro Circuit Stop 5 trophy last week at the Potomac River in Maryland.

The Italian pro sat down with MLF Bass Fishing magazine scribe Tyler Brinks before the start of the 2021 season to chat about his expectations (and those of his countrymen). Here’s what he had to say:

Where are you from?

JG: Florence, Italy, one of the most famous cities in the world for museums. I lived in the heart of Florence and a 15-minute walk from the famous Dome of Florence. It is a beautiful city with a great history. It is a romantic city built before the birth of Christ.

What did you do for work in Italy?

JG: That’s funny because my entire career was working for nightclubs. I worked as an art director, organizing parties, arranging the DJs and doing it all. I also worked in promotions and did public relations for clubs and even managed them.

While doing this, I also worked as a fishing guide. I would go straight from the club and sleep for a half-hour and then go fishing with a client. It’s sick and not normal doing that and not getting any sleep. I was also getting older and didn’t belong in that world in the nightlife scene, and started taking tournament fishing more seriously.

How is bass fishing in Italy?

JG: Bass fishing is the most competitive fishing we have there. It is popular, but nothing like here in the states. The main difference is we do not have big boats like we have here. The gas is too expensive, and you wouldn’t be able to afford to run them.

Our lakes are also small and we also do a lot of finesse fishing. It is similar to fishing in New York with light line on natural lakes with clean water. We fish like we are fishing for smallmouth bass, but we only have northern-strain largemouth there. I consider myself to be a finesse specialist. I won the 2018 FLW Italy event with 4-pound-test line.

Tell me about the tournament scene in Italy.

JG: There are no professional tournaments like here, but we did have the MLF International Division and the B.A.S.S. Nation tournaments. I was able to win both of them and knew that I needed to jump because I won everything possible there.

When did you make the jump to America to chase your dream?

JG: In 2018, I qualified for both the Toyota Series Championship and B.A.S.S. Nation Championship, and they were within a few weeks of each other. I knew that if I went, I would have two shots to make it happen and bought a Phoenix boat from Freedom Marine Center in Guntersville, Alabama while I was still in Italy.

I hadn’t even qualified for the Toyota Series Championship at that point when I bought the boat and everyone said, ‘this guy is crazy,’ but I did it.

I did poorly in the Toyota Series Championship but finished third in the B.A.S.S. Nation Championship and made the 2019 Bassmaster Classic.

How has your experience tournament fishing in America been so far?

JG: In 2019, I fished the Bassmaster Classic and it wasn’t good. I ran out of gas and had my catch disqualified for being late. Making that event made me feel like I was ready to compete against the big boys, but I was not.
That whole season was difficult fishing the Bassmaster Opens, but I told myself it was just the first year and I should try it again.

2020 was better for me, even with the pandemic going on. I got two top-10 finishes in the Toyota Series (sixth at the St. Johns River and eighth at Ft. Gibson) and almost got another – I finished 13th at Toledo Bend. I finished sixth in the Southwestern Division and fourth in the Southern Division and double-qualified for the Tackle Warehouse Pro Circuit by fishing safe and ensuring I got enough points to become a professional.

JG: All of the bass fishermen there follow Major League Fishing and [B.A.S.S.]. Now they have me as a representative and they follow it even more closely. It is nice for me to have the support, but I also feel a big responsibility. Everyone in Italy is cheering for me – not only in Italy but all of Europe. France and Spain have a lot of bass fishermen.

Logistically, how are you able to manage a fishing career in a foreign country?

JG: I am here on a sporting visa because I am considered an internationally recognized athlete since I have been on the Italian National Team. It is a five-year visa. Before that, I had to go back and forth between events.

I also have an LLC here, an American driver’s license and a bank account. I am becoming more American every day, and those things helped solve a lot of issues I had.

I am also staying with Salvatore Cicero and his family in Montgomery, Alabama between events. He is the owner of Transducer Shield and Saver. They are one of my sponsors but also like my family. He is also Italian, and we met at the 2018 Toyota Series Championship. I am blessed to have these people in my life. They treat me like their kid, which is nice sometimes.

Who are your other sponsors?

JG: I have very good sponsor support. My title sponsor is BKK Hooks International and Freedom Marine Center have helped me since the beginning. Transducer Shield and Saver, 13 Fishing, Rapala, Sufix, Minn Kota, Humminbird, RELiON batteries, Oakley and an Italian outdoor clothing company called HKB are all very important to me.

Do you have a family back home?

JG: I have a 10-year-old son, Lapo, and a girlfriend, Federica, in Italy. The last year has been very hard with the pandemic and [I’ve been] unable to go back and see them. I missed their birthdays and Christmas and that wasn’t easy. I spent Christmas with Salvatore’s family, and that was so much better than being by myself. My girlfriend is waiting for me to get established, and when we get married, she can come here with me. But it is a big step and I need to be able to make a living. That’s a big responsibility. I can’t fake it. I need to be able to provide for both of us.

What are your goals for the season?

JG: This season on the Tackle Warehouse Pro Circuit has all of the importance in the world. I want to make a career as a real professional angler, and I am investing a lot of money. I want to make the TITLE and show people – and myself – that I am good enough.

What’s been the most challenging adjustment to life in America?

JG: For fishing, you have to fish very fast here; there is no way around that. In Italy, we are very precise and methodical, but also very slow. You cannot do that here on a big lake. Even the world’s best angler can’t fish all day in an area with no fish and catch them. In Italy, the lakes are smaller, so you are almost always around fish.

I am learning that you have to fish more aggressively here and cover water to search for fish. You cannot fish gently like we do back home.

When not fishing, it has been challenging to do everything always by myself. Everything from fishing, arranging travel and doing my laundry – I do it all. And, if I have a problem, I can’t just call mamma.

I do think living here has made me a better person. I have been forced to communicate with people and talk to guys I don’t know. You have to be willing to talk to everyone, which has been different because we are not like that in Europe.

JG: I think my laugh says it all. I am not going to say it is bad; it is just fake. I see cheese with an Italian flag printed on the package and then it says ‘proudly made in Wisconsin’ next to it. I do think America has the best meat in the world. My very favorite thing to get is a ribeye. If I go to a Longhorn Steakhouse, I am going to get a proper steak, but I’ll eat it all. I’m not too picky. I also enjoy the hamburgers, but I’ve quit trying to find good Italian food here.