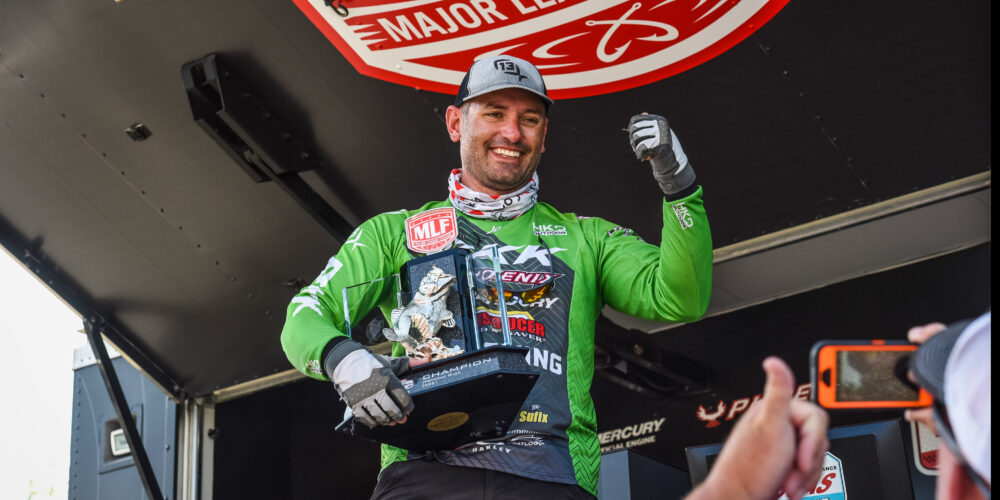 Having his best day of tournament fishing ever, rookie Jacopo Gallelli dropped 20 pounds even on the scales on the final day of the Tackle Warehouse Pro Circuit Presented by Bad Boy Mowers on the Potomac River to capture the biggest win of his career. With 65-3 overall, Gallelli’s biggest limit of the tournament pushed him to the top of the field at the Federal Ammunition Stop 5 Presented by Lucas Oil to become the first European to ever win a Pro Circuit event and take home a cool $100,000 for his efforts.

Hailing from Florence, Italy, Gallelli’s journey as a professional angler hasn’t been easy. Months away from his family and tens of thousands of dollars spent on travel, gear and entry fees can wear on you in a hurry.

“It’s kind of amazing – it’s been such a long road and I’ve had so many things happen this season that just weren’t going my way, so to end up here with this win is absolutely amazing,” Gallelli said. “This trophy means way more than the money for me. I’ve invested my entire life trying to achieve this level of fishing in my career, and I am finally here. I came 5,000 miles across the ocean to make this day happen.

“It’s been such a sacrifice and the sacrifice has continually grown. If I go back home, I cannot keep competing. I’ve missed my son’s birthday, Christmas, New Years, Easter and now it sounds like I probably cannot go back to Italy until the beginning of the fall. But I will be coming back with something great. It’s not about the money – it’s about coming home with one of these [trophies].”

Though his sacrifices have finally paid off, Gallelli was nearly at his breaking point last month after a disastrous event on Lake Eufaula.

“After a tournament like Lake Eufaula where I bombed it completely, I felt so bad,” Gallelli said. “There was a good reason. I was talking with my lawyer the night before the tournament and she said I couldn’t go back home so I went berserk in my head and was not confident.”

“I started feeling like I couldn’t compete at this level,” he said. “Then I thought, no, I’ll stay one week more and compete in a BFL. So, I played that BFL on Eufaula the week after and got a top 40, which is nothing, but it was a check in a place I bombed completely. It got back my honor and my confidence, and was the right move.”

From there, Gallelli turned north to pre-practice on the Potomac. Bad weather prevented him from learning much, though he did realize that Potomac Creek had potential for some good fish.

“This is not a very big fishery, so my idea coming for pre-practice was to start from the end of the river we’re allowed to fish and move up to see where there was more fish,” he said. “When I found Potomac Creek, I saw there was grass and made a cast and caught a 4-pounder. I knew it was a good spot.”

Checking the rest of the river during official practice didn’t produce many of the fish Gallelli was looking for, but a 300-yard stretch of grass in Potomac Creek seemed to be the best thing going.

“Where I caught my best fish is a bend in the edge of the grass,” he said. “There is a line of grass that all of a sudden makes a 45-degree change of direction and it makes an eddy where there are three or four clumps of milfoil. That’s where the big fish were.

“To me, you have to know how much it takes to win a tournament and how much (weight) will be your target fish. My target weight was at least 13 ½ to 14 pounds per day to 17 pounds. I never thought I could make 20. I don’t know why those 4-pounders showed up today. They must like me to win.”

Working the grass line over and over each day, Gallelli had two primary baits. Over the first two days, a 2/0 BKK Titan DIVER hook rigged with a 3.3-inch Keitech Swing Impact FAT swimbait produced, despite several lost fish. He threw it on a 7-foot, 4-inch 13 Fishing Omen Black 3 rod with a 7.5:1 gear ratio 13 Fishing Concept C2 reel spooled with 14-pound Sufix Advance fluorocarbon.

The difference-maker, however, was a tip from travel partner and fellow Pro Circuit pro Kyle Gelles.

“My friend Kyle told me he was smashing them with a [Z-Man Evergreen ChatterBait Jack Hammer],” Gallelli said. “I was going to throw a shad color, but Kyle said the [Hite’s hot craw] was the color. So, I started the third day with that and after one hour I had my limit for 15 pounds and said, ‘oh, thank you Kyle.’”

Most pros that win agree when it’s your time, it’s your time, and that couldn’t have been more evident today. After catching 19 pounds in Potomac Creek, Gallelli made a last-minute stop outside of Mattawoman Creek to make a late-day cull to seal the deal.

“There’s a patch of milfoil where I caught a nice 3-pounder on Day 3,” Gallelli said. “I know the spot very well, I know where to cast and I know if there’s a hungry fish he’s going to bite. When I caught that last 4-pounder, I had 3 minutes to go. That’s how close it was.”

Arriving back at the Smallwood State Park dock for check-in, Gallelli was riding high as he was certain he had just reached the dream he’s chased for so long.

“All the problems, all this stuff that happens, you pass through it just because of the chance to win,” he said. “Now I know I can win because I have [the trophy] in my hands. The only thing that would have made this a better Father’s Day celebration is if I were able to hold this trophy with my son. I dedicate this win to my son, Lapo – Ciao Lapo.”