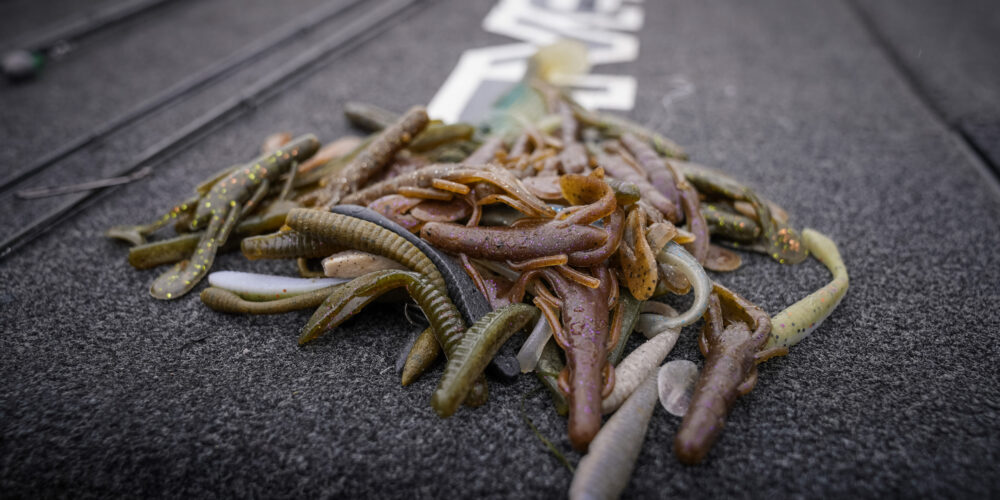 MASSENA, N.Y. – When it comes to deep smallmouth, there’s no need to overthink it.

Drop-shots, Ned rigs, Carolina rigs – that’s all you need, and it’s all the pros in the Tackle Warehouse TITLE Presented by Mercury used. Though, each put their own little stamp on where and how they deployed them.

1. A “pretty special area” helped Spencer Shuffield bring home the TITLE belt, as he figures he never went more than 25 minutes without a bite on his drop-shot or Ned rig the entire final day. On his drop-shot, he used a Berkley PowerBait MaxScent Flat Worm (green pumpkin party or brown back) on a No. 2 Gamakatsu Drop/Split Shot Hook, with a ½-ounce Ark Tungsten No Chip Skinny Drop Shot Weight with a 6-pound test Yo-Zuri T-7 Premium Fluorocarbon leader all thrown on a 7-foot, 4-inch, medium Phenix M1 rod. For the Ned, it was a 7-foot, 2-inch, medium Phenix M1 rod, the same leader and a Z-Man Finesse TRD (green pumpkin goby) on a 3/8-ounce WOO! Tungsten Ned Head Jig.

2. Two lost giants on the final day will haunt Dakota Ebare, but outside of that, his execution was flawless. He fished “subtle stuff” most anglers would overlook with a drop-shot rigged with a Strike King 3X ElazTech Baby Z-Too (shad colors) on a No. 1 Owner Mosquito “Light” Hook above a 5/8-ounce WOO! Tungsten weight. He threw the rig on a 6-foot, 9-inch Hammer spinning rod and used a Lew’s Custom Lite spinning reel spooled with 10-pound Seaguar Smackdown. He originally started the tournament with an 8-pound test Seaguar Tatsu fluorocarbon leader but switched to 6-pound as the week went on, which he said made a big difference in the number of bites.

3. Having fun and switching it up as he went allowed Jacob Wall to adapt his way to a top finish. He started the event right near takeoff fishing “hard spots” – barge ties, sea walls, etc. – with a drop-shot. He used a 7-foot, 2-inch medium Phenix M1 rod and his drop-shot lure of choice was a Strike King Half Shell (green pumpkin purple). He eventually switched to the Ogdensburg area where he began drifting shoals in anywhere from 25 to 45 feet of water with a Carolina-rigged Zoom UltraVibe Speed Craw.

4. The winner of the Knockout Round, Kurt Mitchell found three little depressions on a shoal down near Chippewa Bay loaded with smallmouth willing to eat a Megabass Spark Shad on a drop-shot thrown on an Impulse rod.

5. Before coming to the St. Lawrence, Martin Villa bought “100 packs” of Berkley PowerBait MaxScent Flat Worms. He had nearly as many humps to fish near Clayton, which he did using a 7-foot, 2-inch Douglas XMatrix rod spooled with braid tied to an 8-pound-test Gamma Touch fluorocarbon leader. A No. 1 Gamakatsu Drop/Split Shot Hook and ½-ounce WOO! Tungsten weight completed the presentation.

6. His fish never stopped moving, but when Josh Bragg found them down near Clayton, he’d rocket up the leaderboard in a hurry using a Megabass Hazedong Shad (shad colors) on a drop-shot or a 3/8-ounce Ned rig with a Berkley PowerBait MaxScent Lil’ General on it, targeting fish setting up on the deep sides of shoals.

7. Capping off a rookie year for the ages, Nick Hatfield won his group thanks to a long run into Canadian waters. Using a Doomsday Tackle Co. rod, he pitched a drop-shot to isolated boulders. His setup consisted of an 8-pound-test Sunline fluorocarbon leader, an Angler Tungsten weight, No. 2 Hayabusa DSR132HD hook and a slew of various goby-colored baits, including a Berkley PowerBait MaxScent Flat Worm and Megabass Hazedong Shad.

8. Making it three-straight Top 10s in championship events, Bobby Lane found the right rock in the right depth to drift drop-shots with Berkley PowerBait MaxScent Flat Worms, switching between green pumpkin when it was sunny and brown back when it was cloudy. He rigged the lures with a ½-ounce Flat Out Tungsten weight on 8-pound-test SpiderWire DuraBraid to a 6-pound-test Berkley Trilene 100% Fluorocarbon leader. And a big key, he said, was his new 7-foot Abu Garcia Zenon rod.

9. “Scratching, clawing and stumbling” into the Top 10, Matt Becker milked drifts from Clayton to Brockville with a drop-shot on a 7-foot, 2-inch medium-heavy Favorite Hex rod and Favorite reel spooled with 15-pound-test Seaguar Smackdown to an 8-pound-test Seaguar Tatsu leader. A ½-ounce Epic Tungsten weight was below a No. 2 Trokar TK150 holding a Megabass Hazedong Shad (green pumpkin shad).

10. The American Narrows always produce, and they sure did for Kyle Cortiana, as the Oklahoma pro plucked out plenty of smallmouth from the underwater rolling sand dunes using a 7-foot, 3-inch medium-light Kistler Chromium rod rigged up with a YUM FF Sonar Minnow or YUM Warning Shot (shad colors) on a drop-shot.