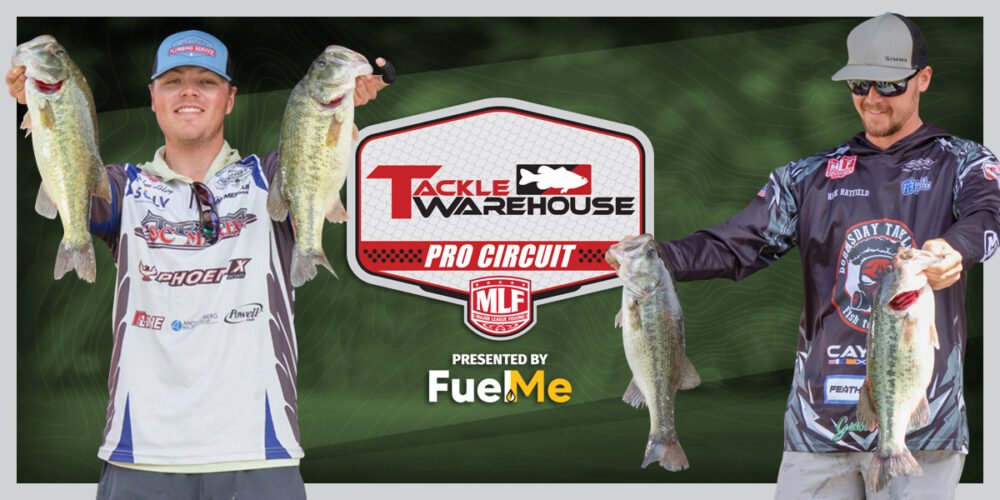 With 23 highly-accomplished rookies joining the Tackle Warehouse Pro Circuit Presented by Fuel Me in 2022, it was a given that the competition for the Polaris Rookie of the Year award would be hot. Still, the highlights this year’s crop of rookies have produced in only half a season are off the charts.

Andrew Loberg making back-to-back Top 10s and nearly winning twice is wild enough, but that’s not the half of it. Christian Greico took down the win at the Harris Chain, Jeff Bridges and Keith Carson made waves in Texas, and Nick Hatfield gave ‘em a run for their money at Pickwick. Suffice to say, this looks like a rookie class we’ll remember, and the Rookie of the Year race could end up being quite something.

Ripping off back-to-back Top 10s is a great way to get ahead of the rest of the rookies, and it has the California sensation in the catbird seat at the halfway mark. With 485 points and sitting at 17th in the standings, Loberg is looking good.

The scary part is that there’s really no reason to think he’ll slow down. In 2021, he won two Toyota Series events, one punching on the Delta and one cranking at Havasu. People don’t just do that. Now, he’s making competing on the Pro Circuit look easy, fishing against bigger and more accomplished fields than he ever saw out west with less experience on the fisheries.

Recently, Loberg has looked excellent on the Tennessee River, with a Top 10 in the Toyota Series event this winter on G-Ville and the recent Top 10 at Pickwick. The upcoming Guntersville event should offer a lot of different ways to catch bass, from offshore fishing to bank beating and shad spawns, and Loberg seems to have proven himself on all those fronts.

Looking toward the summer, Loberg has a striking amount of tidal experience out west and will surely put in his time at the James before it goes off-limits. Champlain might be one of his toughest tests, as a lot of the field has some solid experience there and he’s not exactly a smallmouth superstar. Still, we’ve seen over the years that counting out western pros whenever there are smallies around is not the smartest thing in the world.

2. Hatfield Surges up the Leaderboard

A disastrous 131st place finish at the Harris Chain put the east Tennessee rookie behind the 8 ball, but he rocketed up 49 spots in the standings to 30th overall with 449 points after his efforts at Pickwick.

The owner of two Top 20 finishes already this year, Hatfield is fishing as well as his supporters expected, and some home cooking on the Tennessee River could be just what the doctor ordered after Florida. Hatfield has won on Guntersville before, and it’s not far from the house, which should give him a solid footing for the second half of the season. After that, the guttering professional will be on less certain grounds, but ones he has some experience on. With good finishes on the Potomac and Champlain and time in at the James, he’s not going into the home stretch blind at all.

3. Taking Advantage of the Tennessee River Moves Hall Up

Blake Hall has had nearly an identical season to Hatfield, doing well in Texas and at Pickwick, and terribly down in Florida. That has resulted in the Tennessee River guide clumped with Hatfield and others at 36th in the points with 443 points.

Sporting an Alabama address and thousands of hours in on Lake Guntersville, this next event will likely be key for Hall from a season-long perspective and a Rookie of the Year perspective. While Hall is obviously a capable angler, he doesn’t have a deep resume out of the south, and the James and Champlain could prove a challenge. Still, he’s going into Guntersville as one of the tournament favorites (of many) and it’s no surprise to see him in the mix.

4. Newcomb Proving up to the Task

A popular pick for ROY going into the season, Plains Division Angler of the Year Andy Newcomb had everyone justifiably excited. Thus far, he’s looking up to the task, sitting at 37th in the points with 440 total. He’s got there like Hatfield and Hall, albeit with lower highs and higher lows, having neatly avoided finishing in the hundreds in the sunshine state.

If there’s a chink in Newcomb’s armor, it’s grass, which has been pretty prevalent throughout the season already. There’s no perfect tournament ahead for the Ozark specialist, but his 2021 Toyota Series season was incredible – a win, a runner-up finish and an eighth-place finish earned him AOY in the Plains Division. So, he may well get on a roll, and if he does, the other rookies may need to watch out.

5. Best of the West Is Looking Good Back East

The 2021 AOY in the Western Division, Phillip Dutra is looking pretty scary in his move east. Having moved to Alabama full-time to chase a career in pro fishing, Dutra’s worst finish this year was 69th to start the season, and he’s made Day 3 each of the last two events to take home back-to-back $10k checks.

Having moved in close proximity to Guntersville and with similar success as Loberg (the two are also travel partners), it’s hard not to feel pretty good about Dutra the rest of the way. Some western pros fail to fully adapt to the move east, but for those that do, highlights are usually ahead.

Behind Loberg and the other leaders, there’s still potential for others to get in the race. Rookie of the Year is historically more volatile than Angler of the Year, which means a hot run near the end of the year can go a long way. Recently, we’ve seen anglers like Sheldon Collings cough up big leads, and folks like Jason Lambert go on a tear to win the title.

This year, there’s a pretty good chunk of rookies doing quite poorly, and the anglers mired in the triple digits of the standings probably can’t come back for ROY at this point. Still, Loberg and the top five aren’t fated to win, even if they have a leg up. Sitting at 43rd in the points, Greico has a win to his credit already this season. In 51st, you’ve got Carson, who won AOY last year on the National Professional Fishing League and might crush at any of the next three stops.

You have to dig a bit deep to find a really compelling sleeper right now, but he’s there in the form of Martin Villa. The one-of-a-kind Virginian knows the James River well and booked a Top 10 in Toyota Series competition last year on Champlain. Now, Villa is currently 88th in the standings, but a couple of Top 10s to finish out the season could change things a lot.