Shuffield Rides 25-Plus to Lead Slugfest on Guntersville 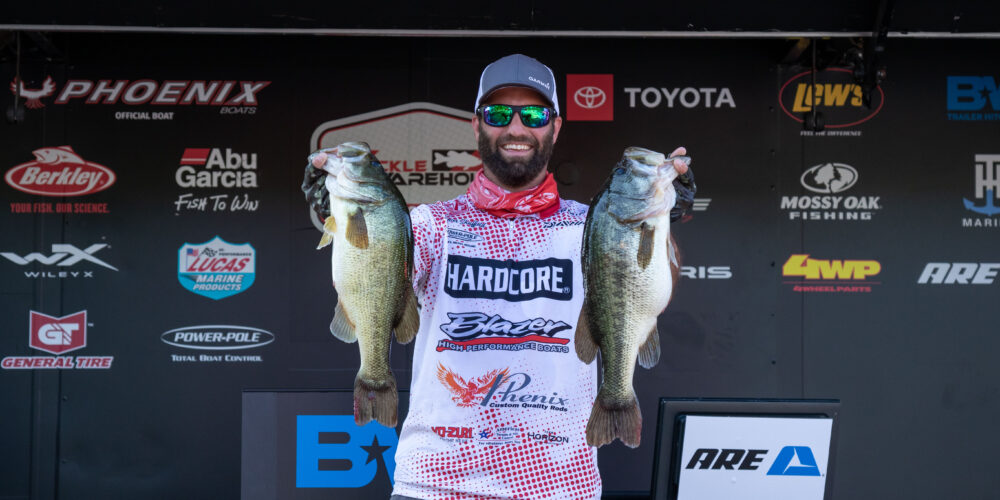 GUNTERSVILLE, Ala. – Spencer Shuffield is leading the pack at the site of his very first pro tournament, 11 years after his debut in the professional bass fishing ranks. The Arkansas pro turned in a 25-pound, 6-ounce bag to cap Day 1 of the Tackle Warehouse Pro Circuit Presented by Fuel Me event on Lake Guntersville; and he’s hoping to stay ahead of the field by riding a volcanically hot honey hole to the finish line.

To do so, Shuffield will have to stay ahead of a wolf pack of pros nipping at his heels with a variety of pick-and-pop patterns at their disposal. From spawning fish, to a shad spawn and of course, fish flooding to the ledges, the field can pick their fancy at B&W Trailer Hitches Stop 4 Presented by A.R.E. With several 20-pound bags crossing the scale, Shuffield leads the charge with a 3-4 lead over offshore guru Michael Neal. Behind them sit a plethora of seasoned pros who are biding their time to strike on the famed fishery.

“It was really good,” said Shuffield of his Day 1 start. “I found four big schools the last afternoon of practice. The first school I found, I pulled up and caught an 8-pounder on it. On that spot there were maybe 100 of them schooling and of them maybe 30 over 6 pounds.”

Shuffield says he didn’t start the tournament on his honey hole but did eventually slide on to it after a local angler graciously allowed him to move on.

“It’s the winning spot, no doubt,” Shuffield said. “It’s just a matter of who might be on it the next two or three days.”

Shuffield says his spot contains enough fish for multiple anglers to sustain themselves on for the duration of the event. However, he’s relying on an extremely deep-diving crankbait to target the fish that he hopes will continue to provide him with an edge.

“All of the fish I caught today were on a Hardcore Bullet Crank 7+,” Shuffield said. “We haven’t been anywhere yet that I have been able to throw it. It’s a brand-new bait that gets down to 26 feet on 14-pound fluorocarbon. These fish are at 22 feet. You can throw it so far, and getting that bait down to that depth is the key because they just don’t ever see crankbaits that deep.”

Shuffield plans to visit the spot early tomorrow to get a limit, but says he will rely on it cautiously due to weights being zeroed on Championship Sunday. Though he feels he could catch another 25-pound bag on the spot tomorrow, he’s likely to rely on a shallow pattern in order to give the fish rest.

Michael Neal is a safe bet on any Tennessee River tournament, so it’s no surprise to see the Tennessee native within early striking distance on Guntersville. Neal says he has been unable to nail down the type of honey hole that Shuffield is on, but he has found success by covering offshore areas quickly. Day 1 provided a slow start for Neal — who says he only had about 12 pounds by noon — but turned around quickly as the water continued to heat up.

“I never caught more than one on a spot other than where I found the initial 12 pounds this morning,” Neal said. “That’s how it was in practice, too. You would catch one here and one there.”

Neal says the water temperature on Guntersville is only now reaching 80 degrees. He expects that warming trend to favor him going forward as it pushes fish out of the shallows and into deeper water.

“That would improve things,” he said of the warming water. “If there is more current and the water keeps getting hotter, that would help. These fish are wanting to be offshore. It’s been a different kind of spring, though. They are a little behind, but they are coming.”

Nelson’s Change Up Pays Off

Michigan pro Ron Nelson weighed the heaviest of a group of 21-pound bags all jockeying for third place at the end of Day 1. His 21-13 limit eked ahead of David Walker, Tom Monsoor and Jared McMillan for the early podium placement. Nelson says a sudden rise in temperature is playing a factor for anglers in the field.

“I started off on bed fish, but all my bed fish were gone,” said Nelson. “I was on them in practice, but the day off and the really warm day following it just knocked them all off. I had a bunch of them paired up and was sight fishing for females, but they’re gone and even the smaller males are, too.”

After abandoning his practice plan early, Nelson says he was able to rebound by targeting transition areas.

“This place is changing by the minute. These fish are trying to get out, and a lot of them are there already. You have to get lucky and find them in a feeding window to catch them.”

Going into Day 2, Nelson plans to stick to his renovated strategy in a bid for another 20-plus-pound bag. However, he’s unsure if he can reliably find the bite again.

“I am really blessed to have caught what I did today,” he added. “There are big ones everywhere in this pond, but tomorrow could be a ride on the struggle bus.”

Nelson hopes to see a breeze break through bluebird skies tomorrow. That, he says, could push the floating pieces of eelgrass to one side of the lake or another, freeing up ledges from the grips of a grass that seems to harass competitors on every cast.