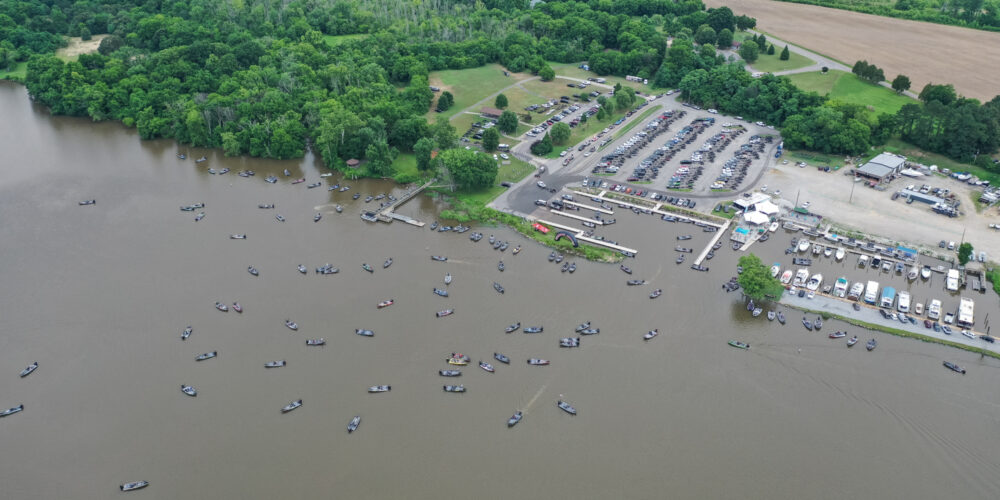 RICHMOND, Va. – Virginia’s James River has plenty of historical significance for both America and bass fishing. It’s known as the “founding river” as the site of the first permanent English settlement, Jamestown. Now, the famed river will host the Tackle Warehouse Pro Circuit Presented by Fuel Me pros for Toyota Stop 5 Presented by PowerStop Brakes.

For bass fishing history buffs, David Dudley won the 2003 Forrest Wood Cup on the river and a trio of bass fishing legends, Guido Hibdon, Hank Parker, and Rick Clunn, won Bassmaster Classics between 1988-90. But, you can throw all of that out of the window as the river has changed drastically since then.

The James is no longer a low-weight fishery and a challenging place to catch a limit. It’s transformed into a regional gem with some truly big bass. This tournament has the Pro Circuit anglers and fishing fans excited to see what the river can produce.

The 340-mile tidal river has undergone a drastic transformation over the past decade and it started before that with a stocking program initiated by the Concerned Bass Anglers of Virginia. Beginning in 2005, the group formed and raised funds to work with the Virginia Department of Game & Inland Fisheries to start stocking F1 fingerlings, a cross between Northern and Florida strain largemouth, into the Chickahominy River. Since then, fishing has gradually improved every year with the bass stocking and expanded vegetation.

In past Toyota Series, Phoenix Bass Fishing League, and B.A.S.S. Opens tournaments, the Chickahominy River was the place to be and nearly the entire field would make the hour-plus trek to fish there. Over time, the James and Appomattox rivers and the Osborne and Hopewell areas have strengthened their case. Now, anglers can win tournaments just about anywhere within reach of takeoff.

This week, we should expect anglers to find success fishing the lily pads and hydrilla located in the Chickahominy, jetties in the main river, and brush piles throughout the system. There should also be plenty of techniques in play with bass in the midst of a postspawn feeding binge.

Sitting in fifth place in the Angler of the Year race, Pennsylvania’s Matt Becker is still in the hunt for that title, but he’ll have to make up ground on unfamiliar waters.

“I’ve never been to the James until this year; I’d always go to the Potomac because it’s two hours closer to home,” he said. “The two places are completely different; the only similarity is that they’re tidal fisheries. But, I like what I saw during practice. The fish are in a summer pattern and biting; it’s just hard to catch one over 2 pounds out there right now.”

Reflecting on his practice, Becker is unsure about what he found because of the tidal influence.

“It’s hard to say what you’ve really found because you can be on the best place on the river on the wrong tide and not catch a fish,” he said. “My strategy for tidal waters is to find one or two areas, camp there, and wait for the tides to be right. The tide is great this week and if I could choose a tide window for a day of fishing, this would be it. We’ll have the best four hours of the cycle during the tournament hours and be able to fish with a lot of moving water.”

“You are going to see a lot of power stuff with everything from spinnerbaits, ChatterBaits, buzzbaits and frogs catching fish,” he said. “You’ll also see guys flipping and pitching jigs and plastics to lily pads, cypress trees, and marsh banks.”

Justin Lucas is having another stellar year and sits in 7th place in the Angler of the Year standings. He’s got an excellent chance to move up this week as he’s one of the best tidal anglers in the game with a long history of fishing the California Delta. He scored a Bassmaster Elite Series win there and also on the Potomac and likes how the tides are setting up this week.

“I haven’t found anything I’m excited about, but the tides are looking pretty good for us this week,” he said. “It should help the bite as the fish are in a summertime pattern and getting around current. This place is full of fish; it’s just hard to find better ones.”

Lucas believes anglers will have a wide array of techniques to choose from and many of them will produce fish.

“It’s typical shallow, summertime tidal fishing out there,” he said. “I’d expect to see a lot of fish caught with topwaters, winding baits, and flipping and pitching.”

Recent local tournaments have taken anywhere between 18 and 24 pounds to win and there may be some 20-plus pound bags caught this week, according to local tournament angler Zachary Bodsford. He believes the final day shootout will take a weight in the upper teens to win.

Lucas and Becker were on the same page with Bodsford’s assessment and both believe we’ll see tightly packed standings.

“The standings are going to be very tight with so many fish biting, and I think 12 to 13 pounds a day will get a check,” said Lucas. “It will probably take 18 pounds to win on the final day.”

Because of the abundance of 2-pound class fish, Becker expects plenty of limits.

“The weights are going to be stacked by ounces and you may have 20 to 30 guys in that 12 to 13 pounds a day range after two days,” he predicted. “It should take around that to make the first cut and 15 a day to make the Top 10 after three days. I expect 17 or 18 pounds to win it in the one-day deal.”

Eyes on the Standings

It’s the home stretch of the 2022 season, with just two events remaining. There’s a lot at stake for anglers fishing this week as the Angler of the Year, Polaris Rookie of the Year, and Bass Pro Tour qualifications are all up for grabs.

For the rookies, Nick Hatfield (648 points), Blake Hall (632), and Andrew Loberg (624 points) have all posted strong starts to the season. All three find themselves in the Top 20 in Angler of the Year points and will battle it out for the Polaris Rookie of the Year title for two more tournaments.