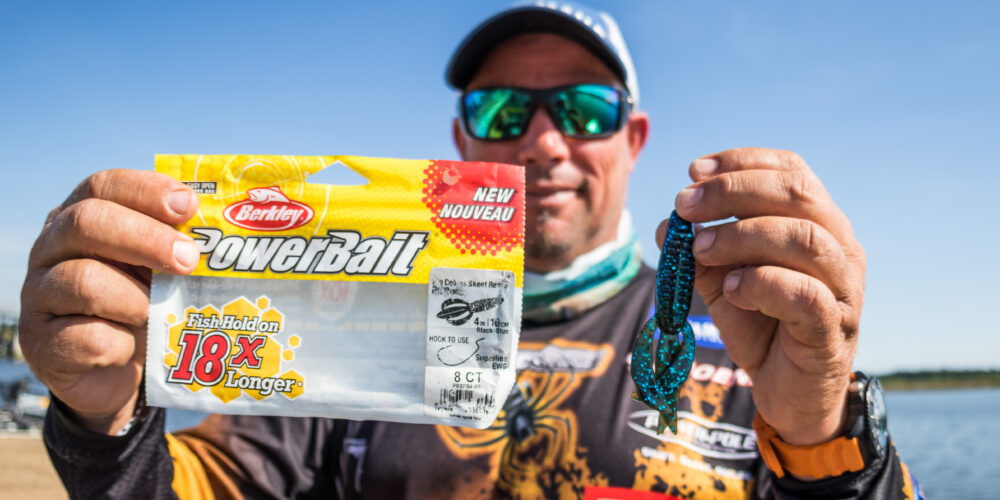 The Tackle Warehouse Pro Circuit Presented by Bad Boy Mowers on Lake Eufaula was top-heavy with those finding success shallow. Of the Top 10, eight were mostly fishing shoreline cover somewhere in the upper part of the lake. The shad spawn played a big role in keeping bass shallow for enough time during the day for the top pros to capitalize on it. As a result, lures like swim jigs, buzzbaits, spinnerbaits, frogs and punching plastics were all big players in the lure department. Here’s a better look at what the top 10 pros used to catch their fish at Lake Eufaula in May.

1. Jason Abram was the No. 1 man with the No. 1 plan at Eufaula and he did it all with just one lure: a custom jig made by Craig France. The unique jig is a 5/8-ounce model and features a flatter, wider head designed to help the jig “float” in current. He trailed the jig with a Reaction Innovations Spicy Beaver and fished it on 20-pound Sunline fluorocarbon on a 7-foot, 6-inch Team Daiwa Flipping stick paired with a Shimano SLX reel with an 8.2:1 gear ratio.

“I use the 8.2:1 ratio because I let that jig fall a couple of feet between pops,” Abram says. “When a fish gets it in that current, I have to be able to catch up to him fast to set the hook.”

2. David Walker put his signature series jigs to work at Eufaula. Walker started his days on a shad spawn, casting a 3/8-ounce Z-Man CrosseyeZ Snakehead swim jig teamed with a Z-Man Turbo CrawZ trailer. In the afternoons, he would fish up the river with his signature series CrosseyeZ Flippin’ Jig in grass and wood. He would also punch mats with a Z-Man Goat under a 1 ½-ounce tungsten weight.

2. Trevor Fitzgerald spent the week fishing brush piles with a rotation of lures including his own Fitzgerald Fishing Tungsten Swim Jig in a ½-ounce model teamed with a 4.3-inch Keitech Swing Impact FAT swimbait. He also cranked a Strike King 6XD, a Strike King Magnum Squarebill 4.0, dragged other jigs and worked a Reaction Innovations Machete Worm through the piles as well.

4. Bobby Lane chased the shad spawn with a 3/8-ounce swim jig paired with a Berkley PowerBait Grass Pig Jr. tied to 30-pound SpiderWire Ultracast. Lane also caught some shad eaters on a spinnerbait, particularly in the morning on Day 2.

He also punched matted vegetation in the shad spawn areas with a Berkley PowerBait Pit Boss threaded on a 5/0 Berkley Fusion19 Heavy Cover hook under a Flat Out Tungsten Flipping Weight tied to 50-pound SpiderWire.

5. Ryan Davidson targeted shallow grass beds early with a 3/8-ounce Big Daddy Baits Harry Buzzbait trailed with a Zoom Split Tail trailer. After that, he would needle brushpiles with a Zoom Ol’ Monster worm and a drop-shot.

8. Dicky Newberry made a dock pattern work for his Top 10 and his best lures were a trio of Santone double-willow spinnerbaits, which included a ½-ounce, ¾-ounce and 1-ounce models.

9. Cole Floyd’s primary bait for punching mats of flotsam up the river was a Strike King Rage Bug, topped with a 1-ounce tungsten fished on 65-pound braid.

10. Ramie Colson’s go-to shad spawn weapon was a ½-ounce spinnerbait with white double-willow blades and trailed with Zoom Split Tail trailer. When he switched to the offshore game later in the day a Zoom Magnum Trick Worm rigged on a 5/8-ounce Xcite Baits X-Lock Shakey Jig was his mainstay.