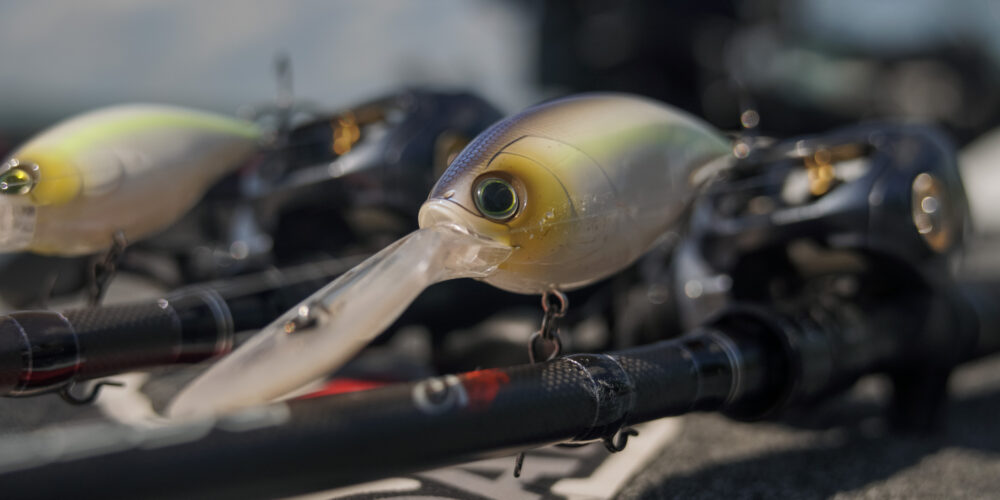 GUNTERSVILLE, Ala. – The sudden onset of summer heat and a lake in transition meant tournament days at the Tackle Warehouse Pro Circuit Presented by Fuel Me stop on Lake Guntersville looked a little different than practice for most competitors. Some that planned on targeting spawning areas unexpectedly found them vacant. Those fishing offshore found their schools were often moving from day to day.

Though the bite was hot throughout the lake, the 10 pros fishing on Championship Sunday separated themselves from a pack of anglers boating a seemingly limitless supply of 2-pounders by hauling in kickers. These are the baits they used to get the job done.

1. Nick LeBrun got out of his comfort zone by fishing an offshore ledge where he tossed a 10-inch V&M J-Mag Worm to boat many of his tournament winning fish. LeBrun paired the worm with a 3/4-ounce  V&M Mega Shakey Head for a variation on a technique he deploys in Louisiana with a V&M Wild Thang Worm, though LeBrun says he only throws the straight worm on the Tennessee River. He also supplemented the worm bite with a 4.5-inch Producer swimbait in the blue crack color, which he threw on a 3/4-ounce homemade swimbait head. LeBrun used 18-pound Sunline FC Sniper spooled on Fitzgerald Fishing Stunner reels for both baits, but opted for a 7-foot, 6-inch, heavy action Fitzgerald Fishing All Purpose rod for the swimbait and a 7-foot, 3-inch, heavy action Stunner HD for the worm.

3. Michael Neal was typically found fishing in 5 to 10 feet of water with either a 1/2- or 3/4-ounce Z-Man/Evergreen ChatterBait Jack Hammer. He used both green pumpkin and shad-colored trailers depending on wind conditions, with a Big Bite Baits Kamikaze Swimon being one of his favorites.

4. Bobby Lane was one of two final day anglers diverging from the pack by fishing shallow. Lane was sight fishing for most of the event using either a 5- or 6-inch green pumpkin Berkley PowerBait MaxScent General thrown on 10-pound Spiderwire DuraBraid with a 10-pound Berkley Trilene 100% Fluorocarbon leader. On the muscle side of things, Lane used 7-foot, medium action Abu Garcia Zenon and Veritas rods with Zenon spinning reels.

5. Josh Butler’s setup consisted of a 5-inch Driftwood Custom Baits swimbait in blue gizzard paired to a 3/4-ounce head. Butler focused on offshore areas and supplemented the reaction bite by deploying a 4.5-inch Roboworm Straight Tail Worm in a pink, morning dawn color on a drop-shot with a 3/16-ounce weight.

6. Jacob Wall started the tournament throwing a Strike King 10XD but switched to a 6XD on Day 2 when the current dropped. Wall was kneeling and reeling the 6XD for much of the event, but also tossed out a Nichols Lake Fork Flutter Spoon with Savage Gear Grip Treble hooks — which feature a built-in swivel — to wrest leverage away from fish attempting to shake hooks near the surface.

7. The Hardcore Bullet Crank 7+ and 5+ crankbaits were enough to keep Spencer Shuffield atop the leaderboard for three consecutive days. Though his bite broke down on the final day, the combination of baits fished on ledges made Shuffield the tournament favorite going into Championship Sunday. Shuffield stuck to a blue sexy shad color for his crankbaits, with both being tossed on 14-pound Yo-Zuri T-7 Premium fluorocarbon and a pair of 6.3:1 Daiwa Zillion reels. He used a Phenix 805 Recon Elite rod for the deeper diving 7+ and an 804 Recon Elite for the 5+ bait.

8. Yamamoto Senko, Senko, Senko. That’s the lure lineup Ron Nelson described when asked about his gear for the event. Nelson and Lane could frequently be found sharing the same coves and shallow bream beds in search of cruising bass. Nelson stuck to a wacky rig for most of the event and netted himself another Top 10 for his efforts.

9. Brandon Mosley leaned on a shad-colored Jackall MC60MR crankbait to connect with fired up fish offshore. If the school was dying down, he would switch to a green pumpkin Daiwa Yamamoto Neko Fat Worm with a 3/32-ounce VMC Neko weight and a No. 2 VMC Weedless Neko hook.

10. Lane Olson relied on a trio of baits to put 61 pounds, 9 ounces in his boat during the first three days of competition. Chief among those was a Strike King 6XD in powder blue back chartreuse. Olson complimented the crankbait bite with a white, 5/8-ounce True Bass Shuttlecock hair jig and an 8-inch Nichols Magnum Flutter Spoon.