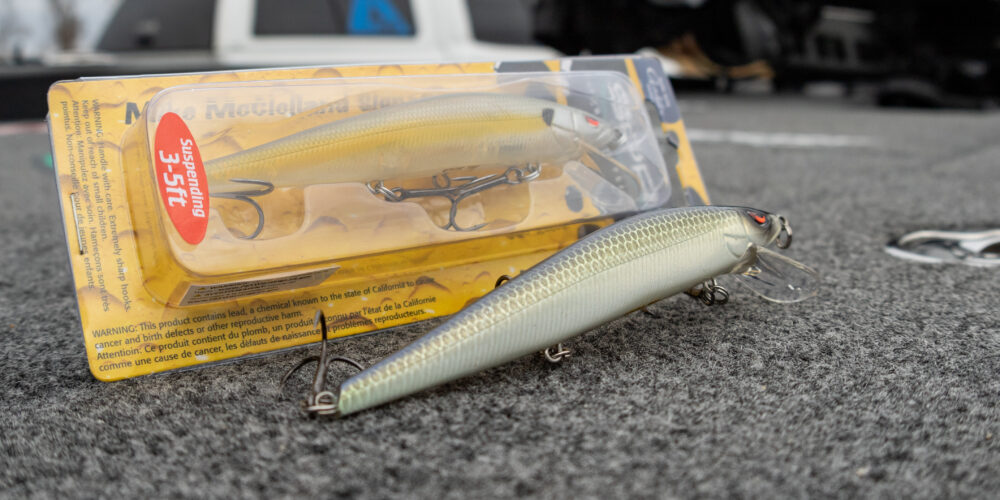 BROOKELAND, Texas – Sam Rayburn is known as a power-fishing haven. Not this week, though.

Sure, Carolina rigs, lipless crankbaits, regular crankbaits and vibrating jigs played their roles, but it was drop-shots and jerkbaits that stole the show on the Tackle Warehouse Pro Circuit Presented by Fuel Me season opener.

1. Michael Neal was the Real Deal this week, leading after two days of fishing and then putting on a show the final day to win back-to-back major events. While he started off the event drop-shotting a worm on a 1/0 Gamakatsu G-Finesse hook and 3/8-ounce weight, he made the key switch to a jerkbait on the final day that produced his 26-pound, 5-ounce bag. Using a few models, some with weighted hooks, his collection included a SPRO McStick 110. For all his jerkbaits, Neal went with 10-pound-test Sunline FC Sniper.

A SPRO Little John Micro DD 45 (clear chartreuse) and a Big Bite Baits Suicide Shad (blueback herring), were also players for him earlier in the event.

2. Three hard spots in Harvey Creek were all Josh Bragg needed to narrowly get into the Top 10 and then ultimately finish second. The first day he caught his fish on “the old ball and chain” rigged with either a Zoom Brush Hog or Zoom Super Fluke, and a drop-shot with a Roboworm Straight Tail Worm (morning dawn) pinned on a No. 1 Trokar Light Wire Finesse Hook. By the final two days, though, he’d started cranking a Rapala DT 20.

3. Randy Despino spent his tournament fishing smaller offshoots in Veach Creek and he found plenty of solid takers for a Bill Lewis Rat-L-Trap (Rayburn red), Z-Man ChatterBait Jack Hammer (orange and red) with a 3.3-inch Keitech Swing Impact FAT for a trailer and a V&M jig.

4. If there’s a deep bite where he can use Garmin LiveScope, there’s no doubt Spencer Shuffield will find and exploit it. That’s what he did this week with a simple plan once he saw a fish. If it was on the bottom, it’d get a drop-shot. He had two rigged up, both with a Roboworm Straight Tail Worm (margarita mutilator in the morning and then morning dawn when the sun came out), but one had a 3/8-ounce Ark Fishing No Chip Tungsten Tear Drop Weight and the other a 5/16-ounce weight. He used the 3/8-ounce when the fish were under the boat so he could drop down on them real quick, and the 5/16-ounce got the nod when casting to them. However, if he saw a fish suspended up off the bottom high enough, he’d throw a Yo-Zuri 3DB Series 110 Deep jerkbait (gizzard shad), which got bigger bites.

5. Evan Barnes wanted to do something different than anyone else. So, he found an area just around the corner from takeoff with zero other competitors, and once there he’d alternate between a drop-shot, a 63-millimeter Ark Z-Series Lipless Crankbait in red, a 6-inch Megabass Magdraft and a KR Custom glide bait.

6. No one got off to faster starts this week than Josh Butler, when he and a Rapala DT 10 (Caribbean shad) did serious damage the first 10 minutes of every morning. Unfortunately, that’s as long as the bite would last, and then the Day 1 leader would have to play “Russian roulette” with a Roboworm Straight Tail Worm (morning dawn) on 7-pound-test Sunline fluorocarbon around 50-60 brush piles he ran each day.

7. There’s not much grass in Sam Rayburn this year, but Pete Ponds was able to capitalize on it Yo-Yoing a Bill Lewis Rat-L-Trap (Rayburn red) around isolated grass patches in super shallow water. Then, once the sun got up, he’d switch to using Lowrance ActiveTarget to find grass patches and toss a wacky-rigged Yamamoto Senko on a Hayabusa WRM202 hook or a jerkbait.

9. Jeff Bridges put a charge into the Day 1 weigh-in with his 10-6 kicker – the lone 10-pounder caught this week. He also missed a few other big ones dragging a Carolina rig with either a Big Bite Baits Pro Lizard or a 6th Sense Hogwalla to hard spots leading into grass.

10. Matt Becker put his trust in Veach, and it delivered. He started every day milking brush piles to get a limit with a drop-shot, opting for a Googan Baits Drag n Drop (brown and purple). He threw it on a 7- foot, 2-inch medium-heavy Favorite Fishing Hex spinning rod rigged with 12-pound Seaguar Gold Label fluorocarbon to 20-pound Seaguar Smackdown braid. He also mixed in a Neko rig, Ned rig and underspin. Once that bite died, he went to the grass with a Z-Man ChatterBait Jack Hammer with a Lake Fork Tackle Live Magic Shad trailer or a jerkbait.