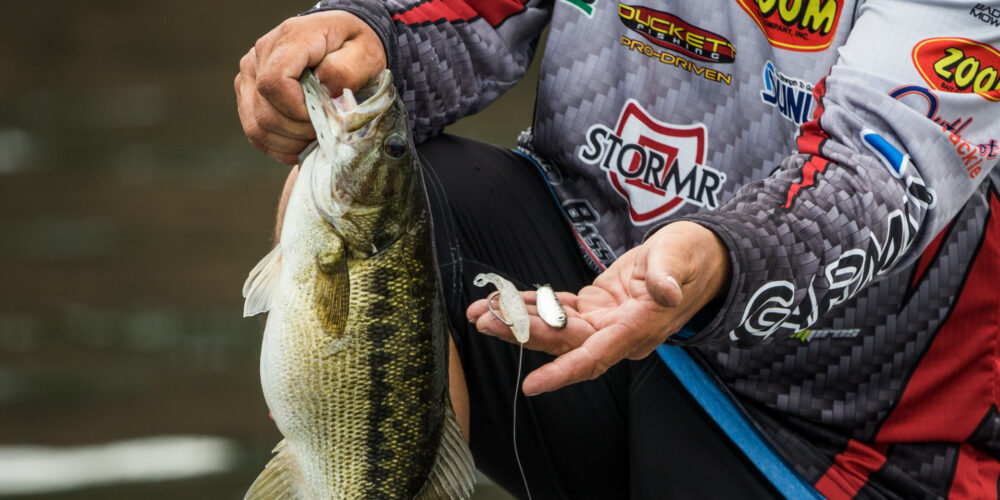 Shallow or deep. Largemouth or spotted bass. All were in play at Smith Lake.

With so many options and things changing by the day, the pros in the Top 10 of the Tackle Warehouse Pro Circuit presented by Bad Boy Mowers event had to really adjust and get dialed-in on the fly.

1. At some point, things were going to align for John Cox to finally win on Lewis Smith from the dirty water far up Ryan Creek. That point was this week, and he covered extensive amounts of water and shallow cover with a black-and-blue Dirty Jigs Swim Jig teamed with a Berkley PowerBait MaxScent Meaty Chunk. He threw the jig on a 7-foot, 6-inch heavy Abu Garcia Fantasista Premier rod and an 8:1 Abu Garcia Revo EXD throughout the event.

2. Forward-facing sonar was a huge player this week, and Spencer Shuffield may be the best with it. He got dialed in on specific docks, and coaxed bites from under them with Duel Hardcore Minnow Flat 95 and Yo-Zuri 3DB Series 110 suspending deep jerkbait (pearl shad) jerkbaits early in the tournament. A Duel Hardcore Twitch’n Ninja Glider played a key role to search out the best docks, which he’d then hit with a drop-shot tipped with a Zoom Super Fluke Jr. or a small swimbait.

3. Cody Meyer and Lewis Smith’s spotted bass are a match made in heaven. Though, they gave him some fits this week. On Day 1, he did his damage with an Evergreen FA 87 jerkbait, which he threw on a 6-9 Daiwa Tatula Elite rod, Daiwa Tatula SV reel and 10-pound-test Daiwa J-Fluoro Samurai fluorocarbon. By Day 2, he’d switched to a 3 ½-inch Yamamoto swimbait. And Day 3 is when he really started pulling out his bag of tricks, tossing the swimbait, a wacky-rigged Yamamoto Senko (baby bass) and even a popping cork with a homemade hair jig at the end.

4. Isolated docks on deep bluffs were key for Kyle Cortiana, as was the large-profiled Jawtec Baits Punch Shad swimbait he used to catch big spots from underneath them, which were coughing up 5- and 6-inch blueback herring. He threw the swimbait on Kistler rods and reels.

5. Targeting suspended, roaming spots near the dam, Kyle Hall used his Garmin Panoptix LiveScope to spy individual fish, which he’d get to bite with either a Keitech Swing Impact FAT on a 3/8-ounce head or a Zoom Tiny Fluke, which he threw out weightless and let sink down to the fish. He threw both on Odiehammer rods and 12-pound-test Seaguar fluorocarbon line.

6. You can go quantity or quality, and Tai Au chose the latter, opting to utilize a modified River2Sea S-Waver (crystal minnow). He threw the glide bait on a 7-6 Fitzgerald Flipping Rod Heavy Okeechobee with a 7:1 gear-ratio reel spooled with 16-pound-test fluorocarbon line. Unfortunately, too many missed fish later in the event meant he had to switch up and rely on a wacky-rigged Yamamoto Senko to fill his limit, with a Duo Realis Pencil Topwater (crystal minnow) added in to catch a few schoolers.

7. Zack Birge badly wanted redemption for a missed opportunity on Smith back in 2015. He even utilized a similar pattern targeting shallow docks with a wacky rig thrown on a 7-2 Favorite Jack Hammer rod, a Yo-Zuri 3DB Series 110 jerkbait (Table Rock shad) and a tiny swimbait thrown on a 7-3 Favorite Pro Series rod, with both strung up with 15-pound-test Yo-Zuri braid and 8-pound-test Yo-Zuri fluorocarbon leaders. As the tournament wore into Days 3 and 4, though, he also went to the backs of pockets to chunk and wind a buzzbait on a 7-3 Favorite Rush rod with 30-pound-test Yo-Zuri braid.

8. Justin Cooper doesn’t know much about spotted bass, but he knew enough to keep two MHX rods on his deck while targeting them with Garmin Panoptix LiveScope. The two rods were rigged with two different colors of V&M Wild Shad swimbaits (French pearl and rainbow shad) on ¼-ounce Owner Ultrahead Round Jig Heads. Both were tied on 8-pound-test Sunline Super FC Sniper fluorocarbon. He also mixed in a Black Label Balsa Ricochet in the junior size while trying to target shallow largemouth.

9. No angler saw more of the lake this week than Cole Floyd, as he could be found far up Lick Creek off Ryan Creek, up Rock Creek and past Duncan Bridge up the Sipsey River all while trying to target largemouth.  A Strike King HC 2.5 square-bill (firetiger) thrown on a Lew’s Team Custom Pro Mark Rose Ledge crankbait rod was his bread and butter up there. He also flipped trash mats there and heavy cover in the backs of the other creeks with a Strike King Rage Bug (green pumpkin) on a Hayabusa FPP Straight HD hook.

10. Despite wanting to do so, Troy Morrow never left Ryan Creek. There were just too many good schools of blueback herring surrounded by quality spotted bass there. In practice and early on in the event, Morrow threw a SPRO McStick and a couple other jerkbaits to catch them, switching from brighter colors to more natural ones as the week went on. Then a wakebait got mixed in along with a couple of swimbaits. By the end, he was throwing a Zoom Super Fluke (disco violet).