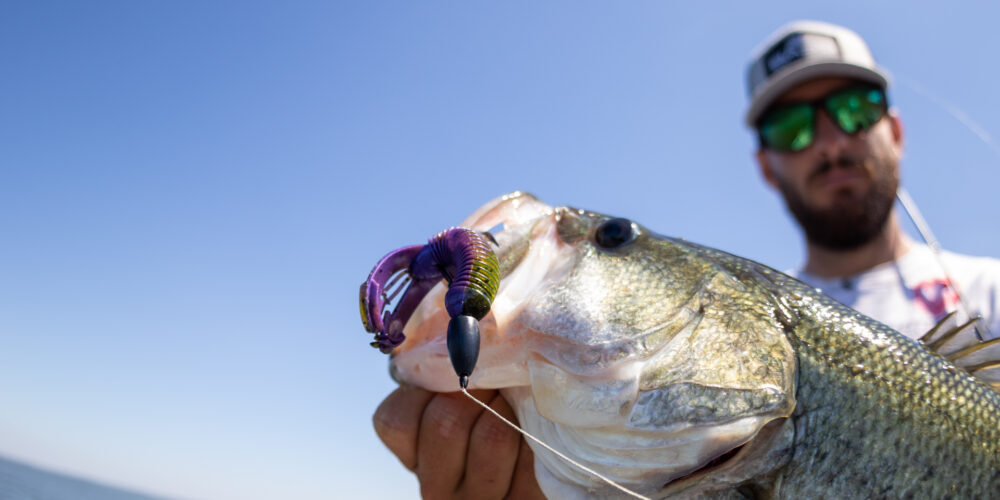 LEESBURG, Fla. – The second Tackle Warehouse Pro Circuit Presented by Fuel Me event of the year, Bass Boat Technologies Stop 2 on the Harris Chain of Lakes Presented by Frogg Toggs played out roughly to plan; with some flipping, a bit of a shad spawn and a lot of offshore shell and grass in the mix.

If you’ve got the Sunshine State on your mind, especially the Harris Chain, you won’t go too far wrong with what the top pros threw this week.

1. Earning the W, Christian Greico fished a Carolina rig on shell for most of his weight early in the event and flipped on the final day. For his C-rig, he rolled with a 7-foot, 6-inch, heavy-power 13 Fishing Muse Black rod with an 8.3:1 gear ratio 13 Fishing Concept C2 reel spooled with 20-pound-test fluorocarbon. On the business end, a ¾-ounce weight pulled around either a Googan Baits Slim Shake or a Googan Baits Dart.

2. Andrew Loberg put weight in the boat all week with a variety of baits on a hot morning bite in Lake Eustis. His best baits included a Lucky Craft LC 2.5, a ½-ounce Z-Man/Evergreen ChatterBait Jack Hammer with a matching Lake Fork Tackle Live Magic Shad trailer and a Lucky Craft Pointer 100. Loberg also put a few in the boat on a double buzzbait, and tried pretty hard to catch some on a big custom glide bait as well.

On the rod side of things, Loberg used a Powell Endurance 6104 CB for the jerkbait and the 755 CB for his vibrating jig. For his crankbait, he went with a Powell Max 754 CB.

3. Finishing third, Shonn Goodwin caught a few on shell with a Carolina rig, but did most of his damage with a smooth-colored Strike King Hybrid Hunter around hydrilla. Notably, he used big Owner ST-36 trebles on it, with a 1/0 on the back and a 2/0 on the front. On the rod and reel side of things, he went with a 7-foot, 7-inch, medium-heavy FX Custom Rods stick, with a 7:1 gear ratio reel and 20-pound P-Line CXX copolymer.

4. Corey Neece did his damage mostly in Eustis, fishing grass with either a Zoom Z-Craw Worm or a  Z-Man/Evergreen ChatterBait Jack Hammer with a Reaction Innovations Little Dipper.

5. Never really getting on a major offshore bite as you’d expect, Mark Rose did his best work at a couple of canal mouths on fish that were schooled and feeding on shad. For that, his arsenal included a 6.5-inch Strike King Finesse Worm on a C-rig, a Strike King Red Eye Shad, a Strike King 5XD, a Strike King Thunder Cricket and a homemade balsa crankbait.

6. The best of the bunch in the Banana Cove area, Jason Reyes went with a weightless 7-inch Yamamoto Senko (black and blue) and a ½-ounce Z-Man/Evergreen ChatterBait Jack Hammer in black and blue and golden shiner with matching Lake Fork Tackle Live Magic Shad trailers.

Buck also spent a lot of time flipping emergent vegetation using a 5-inch Z-Man ZinkerZ with a 5/8-ounce weight and a 5/0 Hayabusa FPP Straight HD hook. On the rod and reel side, he went with a 7-foot, 8-inch, heavy Favorite MDJ Signature Hex rod, an 8.1:1 Favorite Soleus XCS reel and 65-pound Seaguar Smackdown.

8. Grant Galloway caught big fish on a variety of baits, but his most productive was probably a small jerkbait. He started out using a Bass Pro Shops XPS Pro Series Suspending Minnow Jerkbait, but broke it off and went to a Megabass Vision 110 Jr. instead. For the jerkbait, he used an Abu Garcia Veritas Tournament rod in a 6-foot, 10-inch, medium power model, paired with an Abu Garcia Revo SX reel and 12-pound Berkley Trilene 100% Fluorocarbon.

9. Living and dying by the plop, Jeff Reynolds crushed them on a River2Sea Whopper Plopper 130 on Day 3. On Day 4, he lost the fish to win it with the Plopper.

Not exclusively throwing a topwater, Reynolds also employed the smaller Strike King Hybrid Hunter and a vibrating jig for some of his catches.

10. Leading the Angler of the Year race after two events, Michael Neal did his heavy damage with a Carolina rig with a ¾-ounce weight, a 5/0 Gamakatsu G-Finesse Hybrid Worm Hook and an 8-inch Big Bite Baits Finesse Worm in green pumpkin June bug.

Neal also added some fish on a jerkbait and a SPRO Aruku Shad 65 in wild shiner.