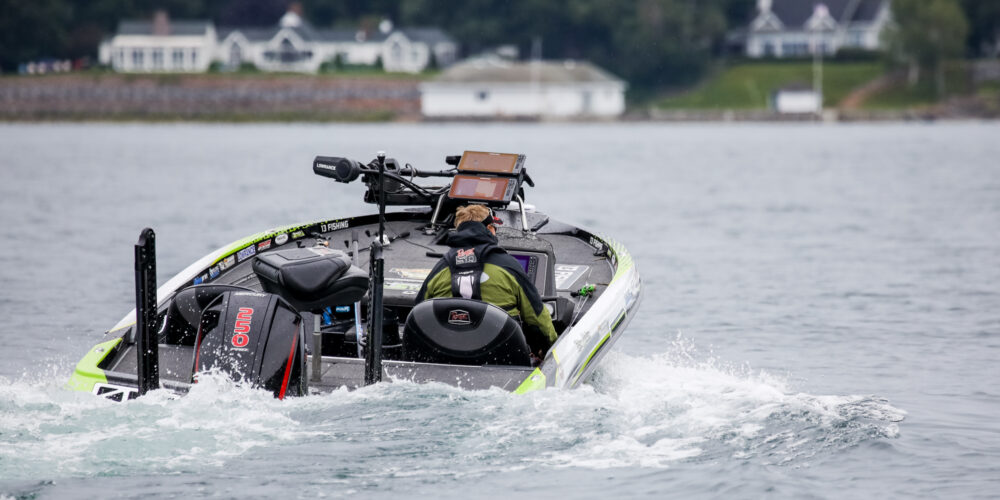 Congratulations! You just cracked 22 pounds of smallmouth on the St. Lawrence River, and your reward is … not even making the top five.

Sorry, but it took mega bags to be at the top of the standings in Savage Arms Stop 6 Presented by Abu Garcia of the Tackle Warehouse Pro Circuit Presented by Bad Boy Mowers

Leader John Cox stayed relatively close to takeoff to sack up 24-12, but most the rest of the top pros made long runs to amass their bags.

It took him more than three hours to get to his area near Clayton and back today. Of course, Joey Cifuentes only needed two hours to put together the second-largest bag of the day.

While it seemed like a perfectly executed plan, “Cowboy” actually had a tough practice. He says he found multiple big schools but just couldn’t seem to get them to bite. Well, today, they bit.

“I don’t know what happened today, but as soon as I dropped it on them they bit,” Cifuentes said. “I didn’t fish a lot of stuff actually. I only hit three spots. My first spot I caught some small ones. The second spot I caught a couple 4-pounders. And then that last spot happened and that was it. I turned around and just tried to poke around looking for stuff up here as a backup.”

Few anglers know smallmouth as well as Ron Nelson, and with that, he had a game plan of trying to catch 20 to 21 pounds. It just so happened he exceeded that despite some technical difficulties.

Little more than 10 minutes into his run west, an alarm started going off in his boat. He wasn’t sure what it was, but it prompted Nelson to cut his initial run slightly short in an area where he had a solid bed fish and felt some other good ones might be near Clayton. The move worked out as he caught a 5-pounder and another 4-pounder off a bed that ran him around the boat ragged. That had him around 19 pounds, but he felt he needed more.

“I had a 4:45 check-in and it was only another 15 to 20 miles to the mouth of the lake where I love,” Nelson said. “So I went for it and fished some history. I pulled up on one spot and caught some small fish. Then I pull up on a second spot and I catch a 5 ½-pounder and the next drop a 4 ¾-pounder. Then I had another big one come off.

“My goal was I wanted to get 20-21 pounds to stay in it. It could be a blowout race, but I don’t see that. I think that range will give you a chance to win. So once I had more than that, I spent the last three hours running 50 mph, just putzing to make sure I got back.”

Fishing the way he loves to fish in a way that’s different from other competitors, Miles Howe is a happy man after today.

Fishing east of Clayton, Howe has two small areas where the smallmouth are schooled up. How he’s catching them he’s keeping to himself right now, but it’s definitely working, as he says he probably threw back another 18-20 pound bag on top of his big bag.

Now, why didn’t he lay off his spots?

“Because I know the bags this place takes to compete,” said Howe, whose bag would’ve been a pound heavier if not for a pair of dead-fish penalties. “You can’t win it on the first day, but you can fall behind and get in a hole. So, I was going to be content with 20 pounds, but then when I stuck another 5-pounder to get over 22 pounds I knew I had a shot at a big bag.

“Besides, each day can be different. I could bring in 16 pounds tomorrow, but I figured today was a shot to give myself a cushion.”

Being the last tournament of the regular season, there’s more than just the victory on the line for many anglers. Points are at a premium, maybe none more so than Stefan.

“My goal was to be in the top 50,” Stefan said. “I came into this event one point outside the top 50 in the standings to make the [Tackle Warehouse TITLE]. I need to move up one spot. So right now, I’d definitely like to make a really strong push at a good finish, but my No. 1 goal is to make the top 50.”

Of course, a big bag today anchored by the biggest fish of the day (a 6-8 brute) doesn’t hurt. Yet, it could’ve been bigger, as he lost two that he feels would’ve had him around the 25-pound mark. So, he’s excited about his chances of making the championship.