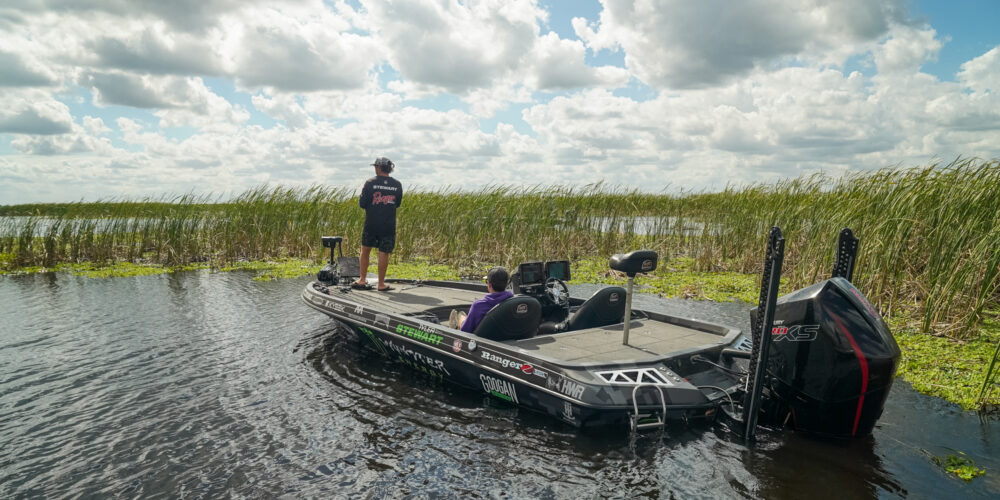 With the entire field weighing fish and 11 bags over 20 pounds (three of which were over 24), Jim Neece Jr. leads the charge for the 13 Fishing Stop 1 on Okeechobee with a massive 27-pound limit. While that’s a great day of fishing, Neece’s lead is only 14 ounces over Miles Burghoff and just under 7 pounds over 10th – which isn’t safe at all on a fishery like the Big O.

From winding baits to flipping, the top pros are doing it all to pluck fish either spawning or trying to spawn from north to south. Here’s a look at how the rest of the top finishers are getting it done after one day one on Okeechobee.

Like Day 1 leader Jim Neece Jr., Miles Burghoff experienced a flood of bigger fish around lunchtime. The hot bite continued for him late into the afternoon.

“I had around 12 pounds by noon after culling a ¼ pound at a time,” says Burghoff. “Then, I figured something out and started catching bigger fish. Near the end of the day, I caught two 6-pounders.”

With a big bag, he decided to experiment and look around at the end of the day in an effort to save some of his primary water.

“I didn’t want to beat up on the fish too bad,” he says. “There were a bunch of boats in the area, but I think I was doing something a little different. I focused on a certain mixture of vegetation and that allowed me to be more efficient and cover ground. I would only stop when I saw what I was looking for.”

Burghoff is hopeful he can back up his great first day and get a shot at his first Pro Circuit win.

“That weight looks good, but it was a struggle for most of the day,” says Burghoff. “I am going to put some pressure on my area tomorrow and try to remain efficient.”

Bass Pro Tour angler Anthony Gagliardi brought in a 24-pound bag near the end of the weigh-in to slip in near the top of the leaderboard. His success came after a frustrating practice and he’s happy to have what he had.

“I know I’ll get some heat from my buddies after telling them how bad my practice was,” says Gagliardi.  “But today was good and those fish grew up. This lake changes so much that you can still turn it into something even if you have a bad practice. Today proved that.”

Gagliardi says that fishing slow was crucial and that he caught his fish pitching to shallow vegetation. The bite started immediately for him in the morning and told him he was on the right track.

“I had a limit in the first hour and they weren’t big, but I had a feeling I was doing the right thing,” says Gagliardi. “I knew I’d eventually connect with a few good ones and that started to happen mid-morning.”

Slow fishing was the theme for Alabama’s Jamie Horton today as he boxed over 22 pounds. Included in the tally was the day’s biggest bass – an 8-6 Okeechobee monster.

That fish buoyed his weight and came shortly before noon. Horton says it was one of just five keepers he caught on the day while fishing the lake’s north end.

“I only caught five today and at noon, I only had three fish,” he says. “I fished as slow as I ever have and fished everything in front of me. I ended up having to go to a couple of small bedding fish just to get my limit.”

Tyler Stewart was the first angler to weigh in and dropped the first 20-plus-pound bag of the day. His bag included solid Florida bass that he caught doing a few different things.

“I caught some flipping and some came by winding baits,” Stewart shares. “The main thing was just covering water. I was fortunate to have a few bigger ones and that is the key here. That doesn’t always happen here on Okeechobee, even if you catch a bunch of fish.”