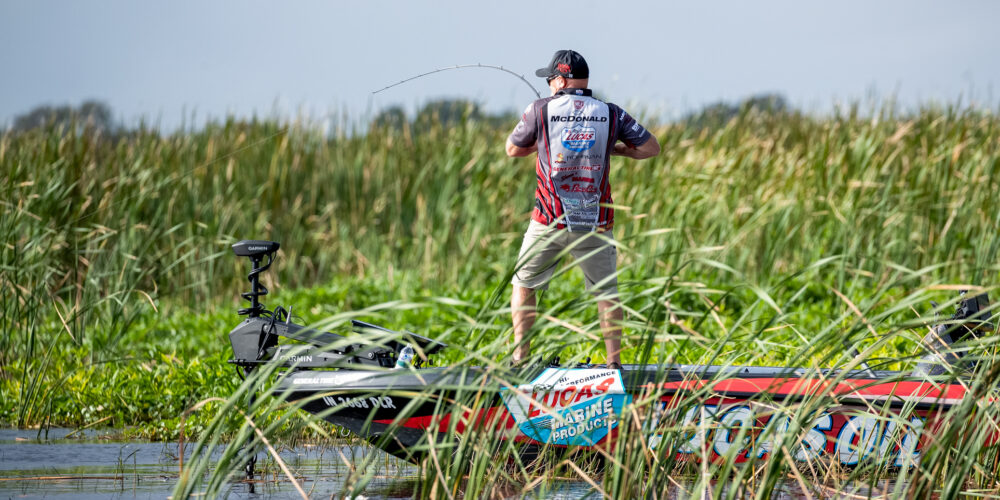 The anglers in the top five of the standings after day three of the 13 Fishing Stop 1 of the Tackle Warehouse Pro Circuit Presented by Bad Boy Mowers are fishing on all ends of Lake Okeechobee and using all the typical Big O patterns.

No matter which end of the lake becomes the winning area, one of the below tactics will likely be the way to win. Heading into the final day, everyone left in the field has a chance to win, and the top five are ridiculously close for a Florida tournament.

Miles Burghoff led the event after the dust settled on day two and is still well within reach of his first tour-level win. His weights have been dwindling each day, but he’s sticking to his area on the West Wall not far from the tournament takeoff in Clewiston.

His weight today was 13 pounds, 2 ounces and he had to make some significant adjustments to obtain it.

“The first two days, I had been flipping and pitching with a ¾-ounce weight and today I dropped down to a 3/8-ounce weight with a Z-Man Bang StickZ,” says Burghoff. “It’s a little stick bait, and I had to work it really slow. I’d shake it in the reeds for a long time before they would bite it.”

He also experimented with a frog and spinnerbait with mixed success.

“I culled out one with a Z-Man Sling BladeZ spinnerbait and lost a good one on a frog,” says Burghoff.

The fishing pressure is intense in his area and he’s sharing it with others in the Top 10, but will be right back there to start the morning.

“The pressure should let off quite a bit from the guys who didn’t make it to the final day,” says Burghoff. “I don’t know if there’s enough there for another 20-pound bag, but I’m going to try.”

Skeet Reese dropped one spot to third after a 16-pound limit, but he’s happy to have salvaged that much after a rough start.

“I had three fish at around 3 o’clock,” Reese says. “That’s when I finally got my fourth and fifth and was able to cull one time. It was a long, stressful day and the wind made it hard to flip and pitch in some of my areas.”

“It is not an area with a bunch of fish, but there are some big ones,” says Reese. “One big bite changes everything here. I’ve got nothing else, so I might as well go back there.”

Just one single ounce behind Skeet Reese is Indiana’s Bill McDonald. He also has the same weight total as fifth place angler Chris Lane, but is technically ahead via tiebreaker.

McDonald rebounded after going through a tournament angler’s worst nightmare.

“I went to cull one fish and another one jumped out,” says McDonald. “I went arms deep into the water to grab that one and lost the one I had in my hand. I went from six fish to four real quick.”

He regained his composure and filled his limit on the next cast doing what he has been doing all week on the West Wall. He brought in a limit weighing 17 pounds, 12 ounces, even after losing a solid keeper during the culling mishap.

It is no secret that McDonald and others are sharing the same area, but McDonald says it is working out.

“I think there’s still enough fish in there,” he says. “All of us have been playing good together.”

Chris Lane has tasted victory on Okeechobee and was considered one of the non-McMillan favorites going into the event. He’s also riding some momentum as one of only two anglers remaining who have increased their weight totals each day of the event.

After weighing a second-straight bag over 19 pounds, he’s within range of another Florida victory.

Flipping and pitching has been a significant part of his plan all week and he’s also mixing in a River2Sea Lane Changer prop bait.

“I’m hitting as many isolated patches of cover as I can,” says Lane. “Finding clean water has been the biggest key.”

To find the cleaner water, he’s been on both ends of the lake and is relying on his Florida roots to plan ahead.

“The most important thing about finding the clear water on Okeechobee is following the wind and what it is doing,” he says. “I took a gamble yesterday afternoon and switched from the north end to the south and it paid off. That’s where I went today.”