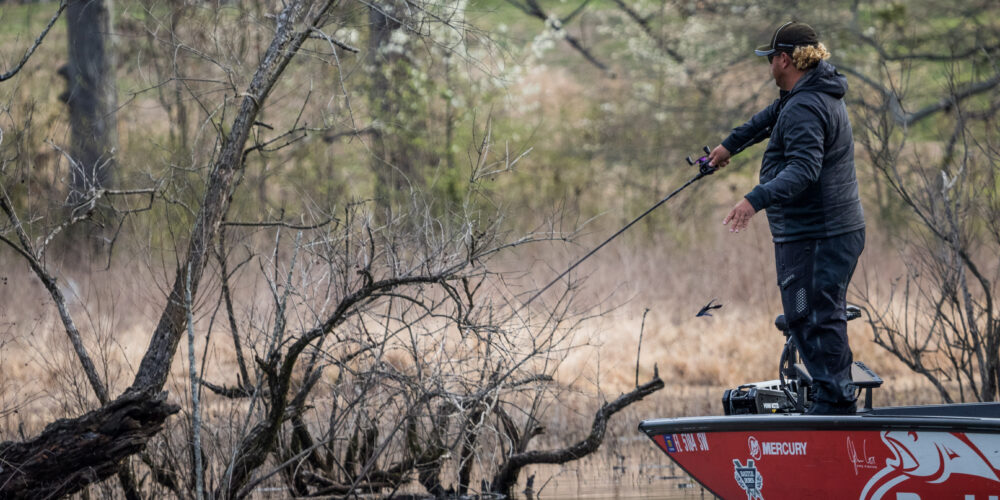 While leader Kerry Milner did his damage out deeper with spotted bass, the rest of the top five is a true mixed bag. The only constant seems to be most of them went with quality over quantity, and all are excited about what could be happening the rest of the week.

Running history can get an angler in trouble, but it can also simplify things in a great way. It did the latter for Joseph Webster. After catching only three keepers in all of practice, Webster decided to just go with what he knew, which keyed him in to a great pattern.

“I started running history plum up the lake from 3 miles this side of the bridge to Brushy Creek,” Webster says. “I figured out pretty quick that wherever the wind was crashing was the deal.  Didn’t matter dock, seawall or point. If the flag was pointing there, and if there were loons telling me there were herring there, that’s where the better fish were.”

Webster was on team spotted bass, but he only caught six today before coming in early, all of which he saw on his forward-facing sonar. He says the fish are suspended 10 feet down over 50 to 60 feet of water, and simply casting to them and letting a small swimbait sink down to them was all he needed to get them to bite.

Considering his practice, or lack thereof, Joshua Weaver was thrilled to have a day he could come to weigh-in early. Especially since that meant he could go back to the doctor.

“Practice was pretty much terrible because I had to get a cyst removed,” Weaver says. “I have to go back to the doctor today. It’s been a hassle all week. So, it’s great to have fun today.”

That fun came courtesy of three areas up the Sipsey Arm that were chock full of herring.

“Herring were key,” Weaver says, who caught nine keepers. “If the fish were off to the side of the herring, that’s what I was looking for because I could get them fired up with a jerkbait or a swimbait. I was actually watching them streak up and eat on my forward-facing sonar. If I saw that, it was almost guaranteed I’d catch one.”

If there’s anyone who’s due for a win on Lewis Smith, it’s John Cox. No surprise after two previous top-10s here, he’s back in contention thanks to the same area he usually fishes up the Ryan. Then again, this time is a bit different from years past.

In the past, Cox maximized that dirty water with a vibrating jig or swim jig, but with it clearer, he hasn’t been able to power fish like usual. He only got six bites in practice, and he’s pretty sure he caught four of those fish today, though he didn’t think the fish were spawning … yet.

“I caught all my fish by noon and practiced the rest of the day and didn’t catch anything,” Cox says, who caught all largemouth (including a 5-pounder) today. “I don’t think they’re spawning, just hanging out getting ready. With how the weather is looking, though, I’m just hoping to scramble one more day and then think really fire off on the weekend. If I can get into the weekend, I’m going to get in the clear water and start looking for them.”

Being from Ohio, Cole Floyd considers himself a largemouth guy. He saw no reason to change that this event.

While he caught a few spotted bass today, all the ones he weighed in were largemouth courtesy of a pattern a bit different from everyone else up Rock Creek.

“There were a handful of guys fishing the same stuff I’m fishing, but they’re fishing different,” says Floyd. I’m not fishing deep enough [to be using forward-facing sonar].

“I think the conditions are perfect for largemouth, with the water temperatures. They’re starting to move up, and I’m fishing exactly as I like to fish.”