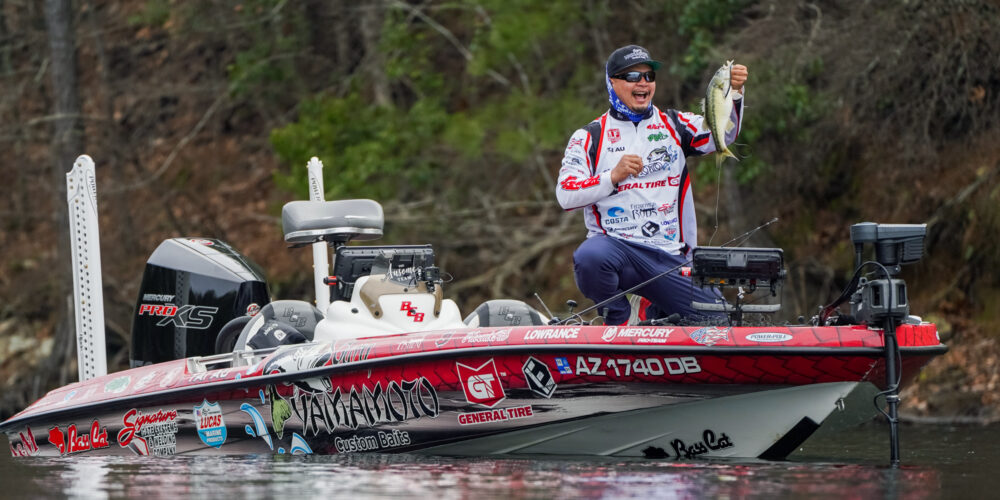 CULLMAN, Ala – Times, they are a-changing, and they’re changing sometimes by the hour on Lewis Smith Lake. After a cold practice for the Tackle Warehouse Pro Circuit presented by Bad Boy Mowers, things have warmed up considerably, which has the fish on the move.

John Cox has done the best staying on top of them by chasing shallow largemouth on the verge of spawning, but the rest of the top five are mainly in the spotted bass game. Well, at least for now. All of that can change this weekend.

Milner has been burned before on Lewis Smith with what he’s doing. He’s just hoping it doesn’t happen again.

The Day 1 leader, Milner had a banner practice at a prior tournament that ended up striking out as the water warmed up come tournament time. The conditions seem eerily similar this tournament.

“They could leave me again,” says Milner, who only caught seven keepers today, “but I’m crossing my fingers it’s still a day or two away from that. I think the pressure is what hurt me more today. A lot more people were fishing the same areas, but they started to move up to the depth I’m fishing today. I’ve been fishing inside of everybody where I’m at.”

Pressure aside, Milner did spend some time today checking the backs of docks “looking for some pulling up.” But his hope is to stay out deeper because he feels it’s where he has the best chance for another big bag.

Few things have impacted anglers more this week than the sun. Both days started cloudy only to brighten up in the afternoon. That’s when a number of pros got right in a hurry, with Neece among them.

“Today started out slow for me,” Neece admits. “I had four tiny keepers at noon. Once the sun came out, they started biting, and I culled everything I had.”

Neece is rotating six main-lake points all day because the fish are there. It’s just a matter of chasing them down.

“I’m chasing them on Lowrance ActiveTarget,” Neece says. “I just have to chase them down and make them bite, and the sun is major for me to do that.”

If the sun helped Neece, it really helped Serafin.

“I had no fish at noon,” Serafin says. “They the sun came out around noon and I caught 4-pounder that clued me into something.”

In short order Serafin had a limit, but it was a gut feeling that turned his good day into the biggest bag of the day.

“On my way in, there was a creek I pulled into yesterday morning that had some big ones sitting in it I couldn’t get to eat,” Serafin says. “I had a little time and I wanted to see if I could get them to eat. They ate, and they ate in a hurry. I had a 20-minute flurry where I caught four fish over 3 pounds.”

Considering he has 15 spots that fit what he’s looking for, including two that he says are loaded with the right quality, he’s excited to get out there this weekend … so long as there’s more sun.

Light line and little lures have been the norm this week. Tai Au went the opposite route.

“I decided to bring the hammer out for this tournament and try for a big bag,” Au says. “No guts, no glory.”

The “hammer” is a glide bait, and it’s certainly getting some reactions from the fish. He got 11 bites today, but he was only able to capitalize on seven of them.

Au is rotating through areas, just hoping to get the timing right with the conditions. Fortunately, with the water temperatures continuing to climb, he’s excited about what the glide bait could do come this weekend.