Most of the pros ran to Kentucky to fish offshore 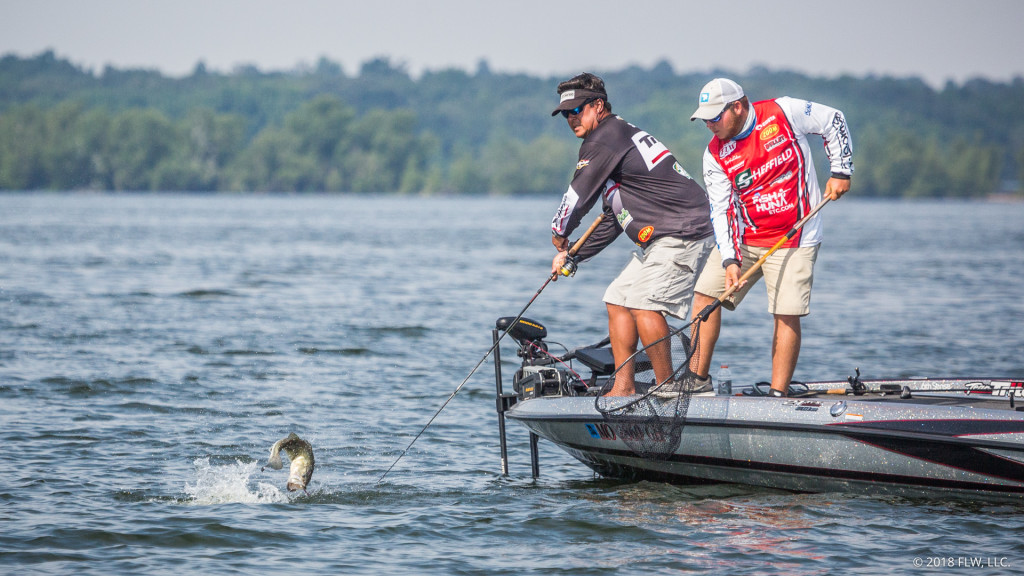 Taking off out of Lake Barkley, the second stop of the Costa FLW Series Central Division turned out to be a battle on Kentucky Lake. Running way down past Paris Landing, Jake Lawrence came out on top by a lot. Other than Ramie Colson Jr. and Andy Morgan, the rest of the top 10 also hit Kentucky hard, largely focusing on fish offshore on ledges. 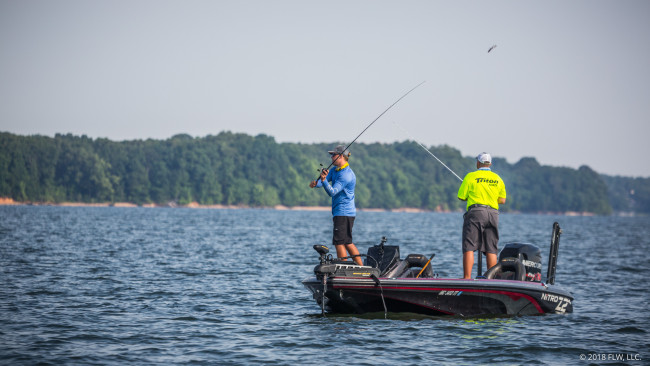 Garrett Paquette had a terrible practice round. “The worse I’ve ever had,” the Michigan angler says. Still, he went into day one with a handful of spots offshore to fish – unfortunately, the first two places he tried on the first day were occupied.

“I just started running around the lake,” he says.” I found a little area and got in there and ground it out. Bites were few and far between. But it was all ledges and most (bites) were between 15 and 17 feet.”

Paquette did not enjoy aggressive action and also dabbled in Barkley.

“I did stop on one spot in Barkley and each day I or my co-angler caught one big one from that spot.” 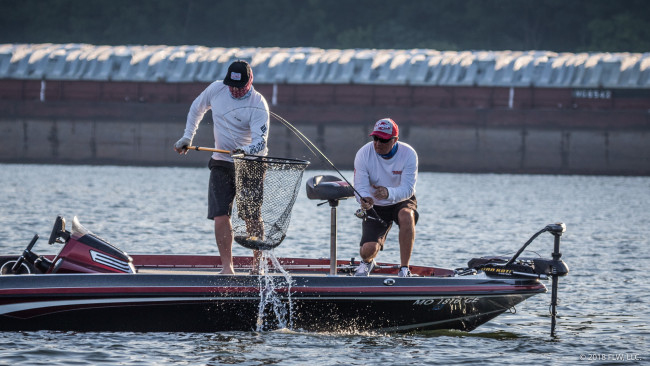 3. Drop-shot does it for Roller

Missourian Mike Roller was the model of consistency during the tourney. He had planned to fish several spots, but his first stop was so good he never moved. He found a productive stretch of ledge on the north end of Kentucky Lake near the used a drop-shot with a 6-inch Roboworm Straight Tail Worm (morning dawn) or a Zoom Z3 Swamp Crawler in pro blue neon.

Fish were tentative. Then aggressive.

He fished a drop-shot to show the fish something different and all his places were on the East side of the lake.

“All the good drops I found were on the East side,” says Roller. “I think the current really helped.” 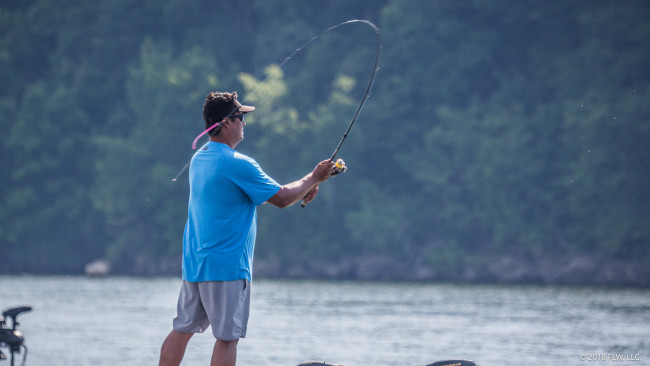 Marcus Sykora also broke with the power fishing approach and used a touch of finesse.

“You think power-fishing when you think ledge fishing, but it just worked out that it was really more of a finesse game than anything else,” says Sykora. “Mostly it was ledge fish on the north end of the lake. The first day they were around 22 feet and later we got them at 31 feet. I think the current helped because if the current wasn’t there bunching them up they wouldn’t stay. I stayed downstream and threw up on them, fishing south to north with the current.” 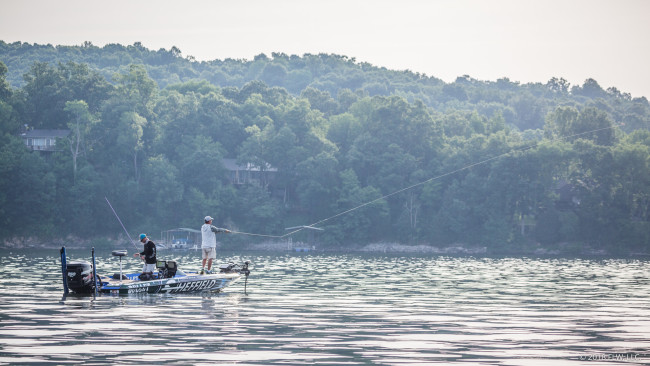 Ramie Colson Jr. lives about a rifle shot from the Lake Barkley State Park weigh-in site. He decided to stay at home, ignored the ledge bite wisdom and landed in fifth place with more than 55 pounds of fish, most of which came on a Texas-rigged Zoom Ol’ Monster. It was Bass Fishing 101.

“I stayed on Barkley. I was targeting brush. I live right over there,” he adds, pointing to a distant hillside. “I have pulled some good stringers out of here. I stayed in the creeks on brush. I did exactly what I intended to do.” 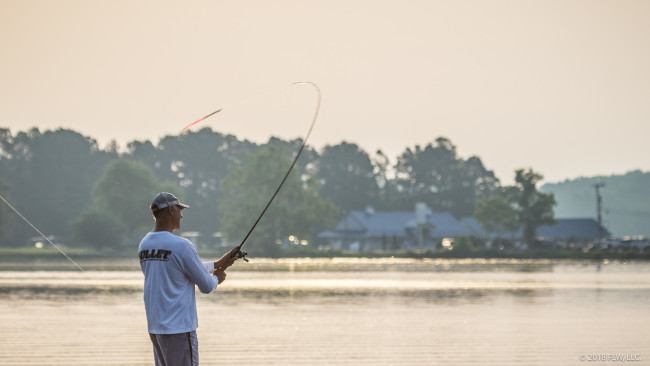 “Everybody knows about the 101 over there last month,” says Morgan, referring to Jason Lambert’s recent FLW Tour win. “I didn’t want to fight the crowd.”

Morgan played the run and gun game, zipping from ledge to ledge with a Texas-rigged Zoom Ol’ Monster.

“I wasn’t on any schools,” he says. “I was just catching singles. Covering a lot of ground. Bouncing around a lot. Burning a lot of gas, but not running a tremendous distance.

“Where there was current present I was going against the current,” he adds. “But in the bays I just made sure I was going into the wind so I could fish slow enough. Once you got to a spot you worked it slowly, then got to the next spot as fast and you could and hit as many places as you could in a day.”

On the final day, Morgan mixed in a little flipping and caught a few of his weigh-in fish on a jig. 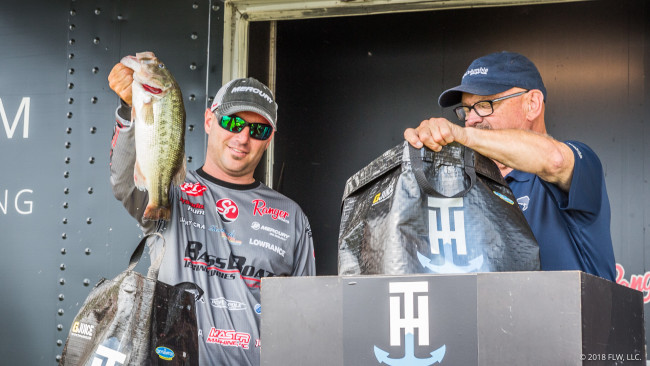 7. Hunter makes another top 10 on Kentucky

Brandon Hunter lives in Benton, Ky., and knows Barkley and Kentucky as well as anyone – in fact, this was his fourth Costa FLW Series top 10 on the twin lakes.

Hunter took a run and gun approach, fishing some places without idling and idling over others before deciding whether to fish or not.

“I worked the ledges all week,” he says. “I’m a power fisherman. I like to chunk and wind. I don’t drag, and I don’t sit on one spot long. Big crankbaits. Big swimbaits. Big spoons.”

Hunter primarily fished on the north end of Kentucky Lake and didn’t catch many fish each day. On the final day his refusal to lay up and toss a drop-shot bit him, as he fished with big stuff for nearly the entire day and came up shy of a limit. 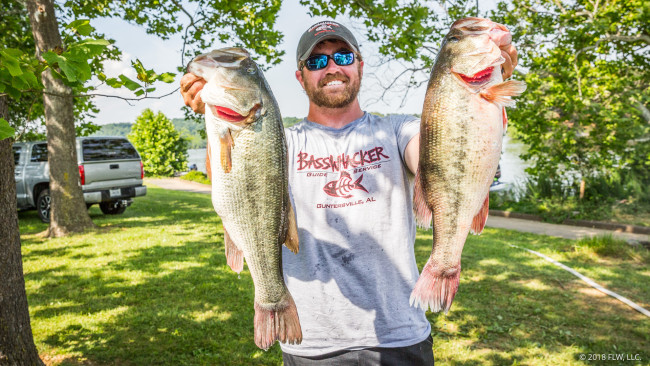 Cody Harrison did the Kentucky thing as well, running as far south as Paris Landing each day.

“I ledged fished Kentucky,” the Alabama angler says. “Anywhere from 10 to 25 feet. I had four main schools that I tried to get on every day.” 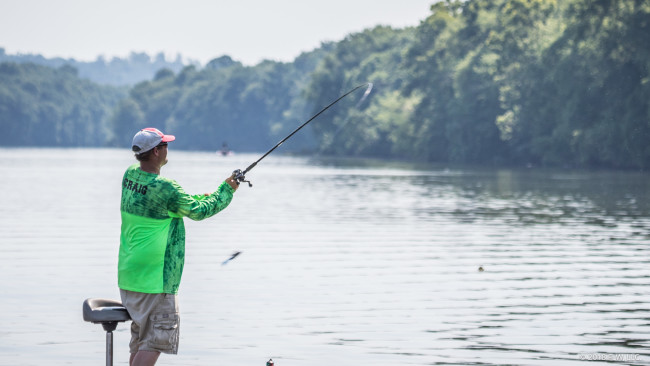 He moved to Barkley for the final round, which he knew would be something of a gamble.

“I was trying to find fish that weren’t real pressured,” he says. “But, there was no current. When there’s no current you can’t hardly catch them on Barkley. And we didn’t get current until 11 o’clock. I gambled and it didn’t pay off. But I made the top 10 and I’m not complaining.”

Craig did notice something peculiar when working his ledges on Kentucky 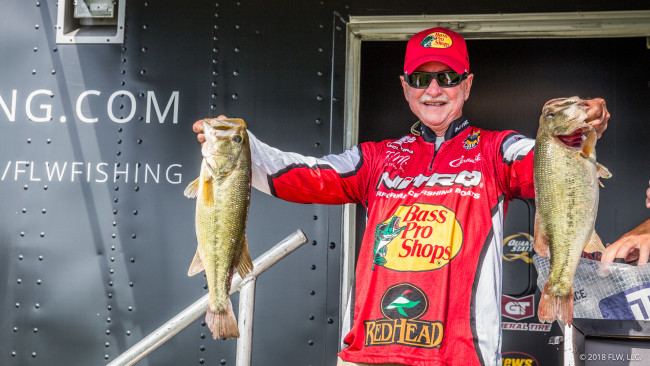 Moving into the Angler of the Year lead in the Central Division, Stacey King booked his second top 10 of the season on Barkley.

“I didn’t have very many places that had fish, so I just tried to fish slow and thorough and milk those places for as much as I could,” says the veteran pro.  “And I was not the only one fishing those places. I fished the north end of Kentucky Lake and took a real slow approach with the plastics. Most of the guys were power fishing. I’m getting too old to power fish all day, so I like to slow down and fish worms and jigs and stuff that I can drag across the bottom.”