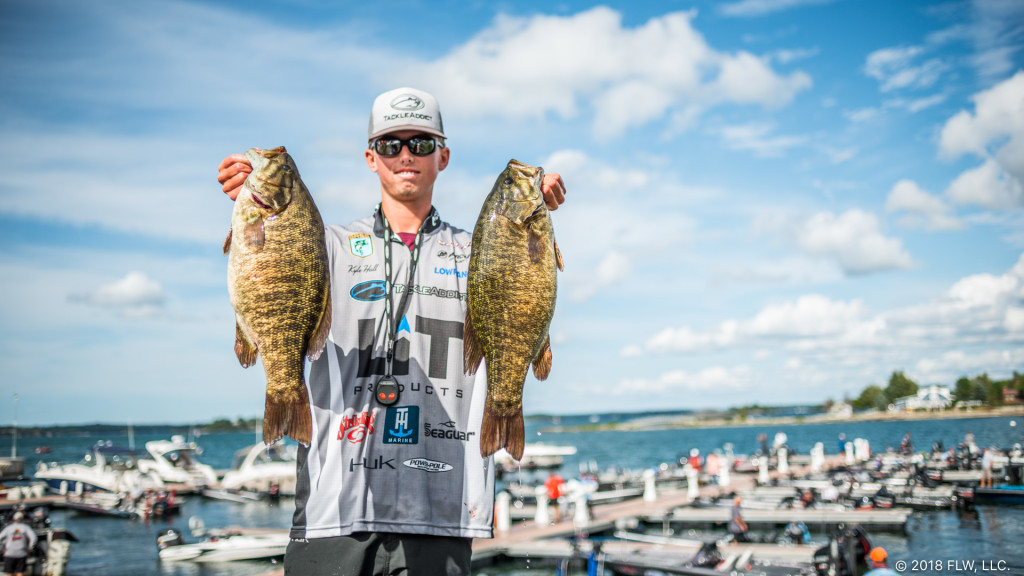 At the age of 21 and over 1,500 miles from home, Kyle Hall of Rio Vista, Texas, put his mark on what is shaping into a heck of a smallmouth shootout. Hall dropped 26 pounds, 4 ounces on day one of the Costa FLW Series Northern Division event at the 1000 Islands, which is presented by Navionics, and holds just an 8-ounce lead over Chris Johnston.

Almost immediately after weighing in, Hall’s phone was ringing from texts and phone calls all while he was smiling ear to ear. But then again, who wouldn’t be after weighing such a stout bag?

“Practice was phenomenal for me,” says Hall. “I caught good bags each day of practice, but I was doing it catching one here, one there. I really didn’t have much of a game plan to start the day, but I figured it out and it was awesome. I’m over 1,800 miles from home and this is my favorite lake ever.”

It’s hard to argue that when you can catch 4 -and 5-pound smallies with relative ease.

For Hall, things started off hot, but quickly fizzled when he realized one of his schools had moved.

“At my first stop of the day I caught a 4-pounder and then went about 30 minutes without another bite,” Hall says. “There was another guy fishing near me and I wanted to trolling motor out past him to get to the other side of the spot to see if the fished moved there.

“Well, as I was moving out around him I found them on a place I never looked at. The next four fish I caught were pushing 23 pounds. Then I culled up once more to hit 25.”

After upgrading to a stout bag of brown ones, Hall moved to another spot. He caught a few dinks before tagging another 5-pounder to push his bag over 26 pounds.

“Once I had 26 I knew I was done for the day and I wanted to save everything for the rest of the tournament. I didn’t even make it to half of my spots I wanted to fish.”

For the record, the limit he brought to the scale was caught in just about 2 hours.

With pre-tournament reports hinting at a tough bite – though the standings today show otherwise with 46 bags over 20 pounds – Hall was reluctant to disclose any fishing technique information, though did point out he kept one rod in his hand all day.

“I don’t know what will happen tomorrow, but I’m excited to get back out there.” 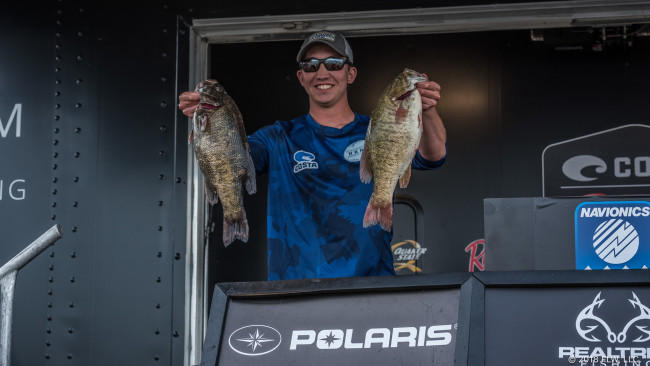 Nearly a year ago to the day, Drew Tiano won the co-angler title in the Northeast Division of the T-H Marine Bass Fishing League Super Tournament held on the 1000 Islands. After plopping down 23-9 on the scale today, it looks as though he’s eyeing up another top prize.

It’s a tight race from the back of the boat – Tiano will cling to a just a 13-ounce lead to start on Friday.  At the 1000 Islands, that’s not even ¼ of a smallmouth.