Texas pro hangs on for victory at Fort Gibson 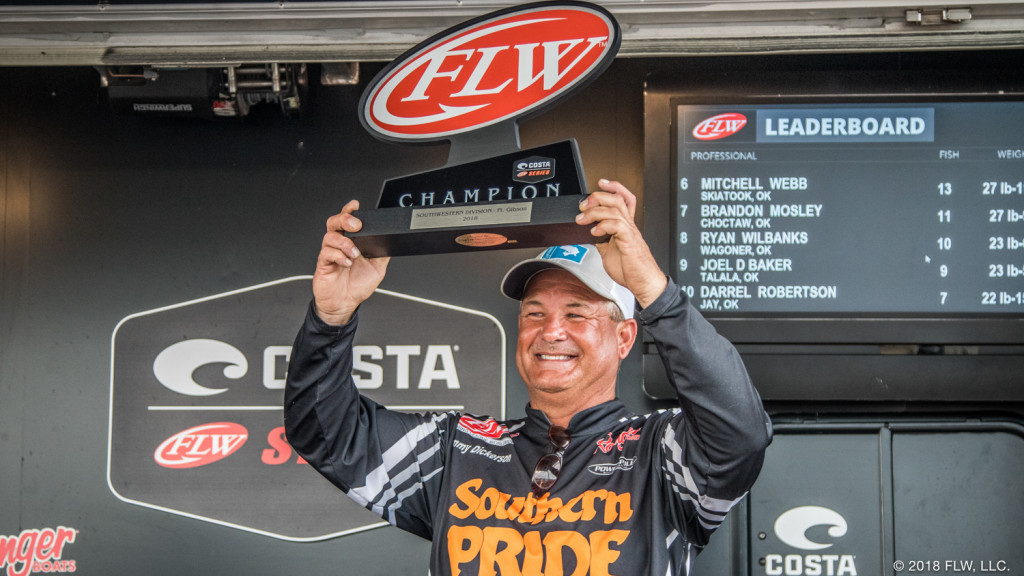 Ounces because Dickerson needed every single one of them to win. When the scales stopped spinning at today’s final weigh-in, Dickerson had actually tied with local pro Kyle Cortiana at 32 pounds, 6 ounces for three days. But the tiebreaker went to Dickerson because he was higher in the standings after day two.

Inches were crucial to Dickerson as well, as mere inches of water determined whether he could get into a backwater creek where he had been fishing for the last two days.

“Yeah, you might say it’s been a week of ounces and inches,” Dickerson adds. “That just shows you how hard it is to win one of these things. The last one I won was 12 years ago at Lake Texoma. And trust me, the older you get, the more you appreciate these wins because you just don’t know how many more chances you’re going to get.” 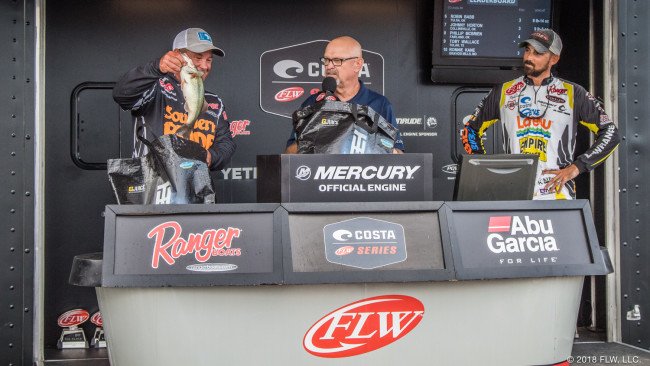 Dickerson spent four days of practice on Fort Gibson trying to scrape up enough keeper bites to at least point him in the right direction. But on day five, he decided enough was enough. An obstinate Fort Gibson was not going to budge in giving him a clue. So with that he made a decision to get as far away from the main lake as possible. He spent his final day of practice grinding and digging his way into the back end of several of Fort Gibson’s feeder creeks.

He sampled a couple of creeks with no luck. At the end of the last practice day he ran far up the river and then far up a creek until he found what looked to be an impassable rocky shoal. With a little finagling and some elbow grease, Dickerson ground his way through the shoal on his trolling motor. Beyond the shallow shoal, the bottom dropped back off to 2 to 4 feet deep. It was enough water to move freely and fish. Three or four bites later, Dickerson knew exactly where he would start the tournament.

The first day of the tournament, Dickerson had little problem getting into the creek. But neither did several other pros who also accessed the coveted area.

Despite two other boats fishing the thin slice of water, Dickerson netted 14 pounds, 7 ounces to begin the event in second place.

By day two, the water level had dropped enough on Fort Gibson that accessing the creek became a challenge. The shallow set of shoals gating the creek was about 20 yards in length and required some fancy footwork on the trolling motor to shimmy his way in. Getting out of the creek on day two was even more treacherous.

“I got stuck several times and began to think I wasn’t going to get back out,” Dickerson recalls.

After finally making a safe exit, Dickerson weighed in 12 pounds to take the tournament lead going into day three.

Overnight the lake levels dropped again, giving Dickerson plenty to worry about. Since he had nothing else to fall back on, he knew getting back into the creek on the final day was a necessity in order to win. 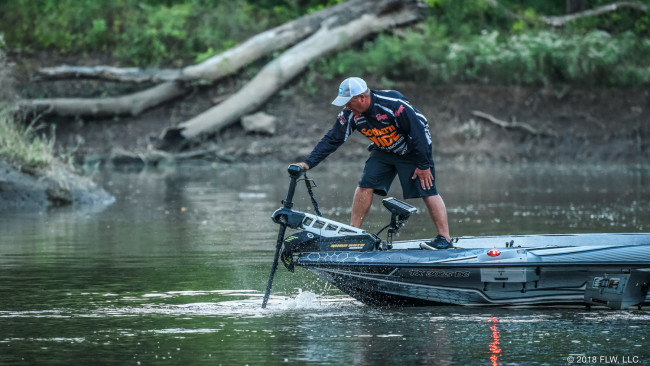 He spent 30 minutes this morning trying to overcome the shallow shoal. But this time the shoal won and turned him back. The crevice through the shoal had become too shallow to pass, and Dickerson had to concede.

But he still had hope.

“The current was running in the river, and the water was coming back up,” he says. “I’ve heard this lake can come up a foot in a couple of hours, so I decided to fish out on the river for a while, bide my time and try it again later.”

At 10 a.m. Dickerson made one last attempt to float over the shoals. This time it worked.

“When I went back in there later, I trolled right over the shoals without a problem,” he recounts. “The water had come up plenty enough to get right through there.”

Once in the promised land, Dickerson went to work fishing the same way he had all week: slow-rolling a Santone spinnerbait right down the middle of the creek channel, contacting any piece of wood or rock that was lying on the bottom.

“Most of the creek was 2 to 4 feet deep,” he says. “The 4-foot spots were mud holes, and the 2-foot spots were rock or boulders creating high spots and current breaks. The water was too stained to see the rocks, so I just fluttered the spinnerbait down there until I felt the rock. If I could get that spinnerbait to deflect off a rock, one would eat it.”

Due to his delay getting in the creek, Dickerson did not have much time to really fish the entire area thoroughly, and he had to leave with just three keepers. But those three keepers, weighing just 5 pounds, 15 ounces, were enough to garner him the win. And he needed every ounce and inch to earn it.