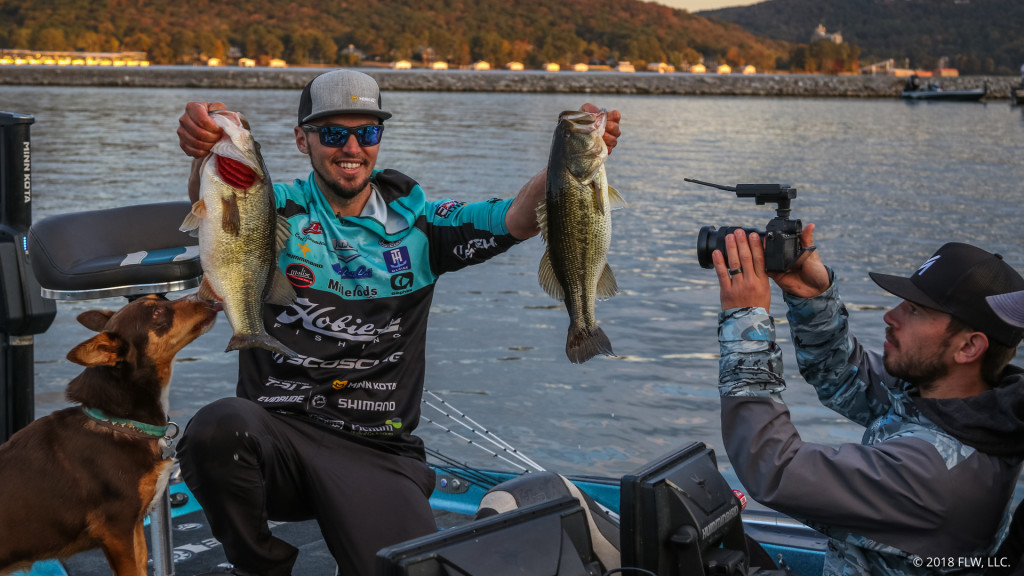 For the last four or five years, FLW pro Carl Jocumsen has been tinkering and testing, experimenting and dialing in ways to incorporate glide baits into his tournament arsenal. He’s been trying to figure out how it can shift gears from being a big-bass bait to a tournament tool.

Apparently, he’s getting really close to nailing down those details. Today, Jocumsen used a glide bait to pound out a 20-pound, 2-ounce limit at Lake Guntersville to establish the lead at the 2018 Costa FLW Series Championship.

“It’s one of those days you’ll never forget,” he says. “I hope I can back it up tomorrow.”

A glide bait is a type of specialty hard-plastic jointed swimbait that’s typically fished with a slow, seductive presentation. It’s a big-fish bait, but it’s also known to be a highly niche option that’s sometimes better at getting big bass to show themselves than to actually eat the bait. Conditions have to be right for it to work, and according to Jocumsen, usually that means windy with sunshine. But not always.

Jocumsen, a native Australian who now lives in Frisco, Texas, has nicknamed 2018 the “year of the glide bait,” and one thing he’s noticed during his recent experimentation is that overcast, windy conditions are actually pretty good for getting them to eat the glide, too. Those were the conditions he had on Saturday during practice, when he had a great glide bait day. And those were the conditions today. The similarity tipped him off that he might be able to glide his way to a big bag.

“We’ve been off the water for two days [a mandatory off day and a cancellation day due to severe weather],” Jocumsen says. “I knew I was just going to have to go fishing. I picked up the big glide bait and a pretty decent sized swimbait and was just kind of going for it.”

Throughout the day, Jocumsen traded punches with his co-angler, Jared West, who leads the amateur division with 17 pounds, 15 ounces. The fish they were targeting were chasing shad, but they weren’t giving the anglers a lot of long opportunities. Shad would flip up against the grass edge, or get stirred up by Jocumsen’s Hydrowave, then big fish – multiple 20-pound stringers – would cruise through the area making chase. Jocumsen and West had to capitalize on their chances quickly.

They caught fish on a few baits, which, looking back, Jocumsen says kept him from committing to the glide all day. Had he done so, he might’ve popped a mega-bag.

With about two hours to fish, he had four quality keepers in the bag. That’s when he finally swore off all other options and glued the glide in his hand.

“I wouldn’t usually pick the glide up with two hours to go, but I had some big bites on it on Saturday in the same conditions,” he adds. 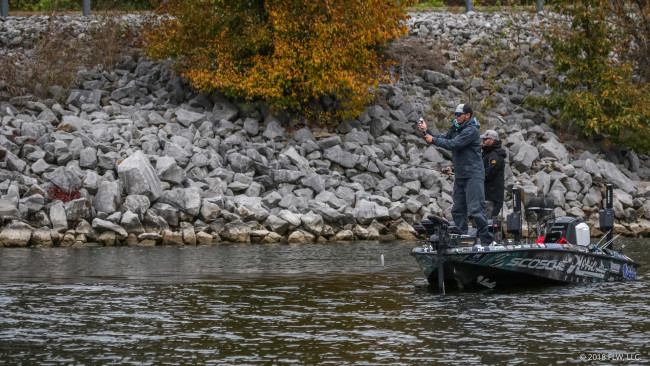 Following his gut paid off with two 5-pound-class kickers to finish off the day. All five of the keepers Jocumsen brought to weigh-in were caught on the glide bait.

Jocumsen knows there are still plenty of quality fish in the area where he caught them today, and other boats around him weren’t dialed in on the juice the way he was. So he’s confident that he’ll be in the neighborhood of a winning bag. The only catch is that, outside of that Saturday prep outing, Jocumsen says he had a terrible practice. Tomorrow’s forecast, which calls for sunny skies, means similar conditions to what he had to deal with on those tough pre-tournament days.

“I’m going to have to adjust,” he says. “I can’t get them to eat the glide in sunny, slick conditions.”

In bright skies, he says the fish see the glide bait too well and don’t commit to eating it. He hopes maybe a little stain in the water from yesterday’s storms might serve as a sort of faux cloud cover, but probably the conditions won’t be ideal to have another magical glide bait day.

“If everything goes to plan I can get on that early morning bite and get five by 10 o’clock, and then I can pick up the glide and things could get pretty scary,” he says. “I think I need to get two big bites, but I don’t think I can get five. These fish are the smartest fish I’ve ever fished for right now.”

Jocumsen has just a 3-ounce lead over Florida’s Kyle Walters, who won the T-H Marine FLW Bass Fishing League Regional on Guntersville in October 2013. The entire field fishes in tomorrow’s final round because day one was cancelled due to severe storms.

West, who caught his fish on swimbaits fishing behind Jocumsen, leads the co-angler division by 1-14 over Roger Stubbs.