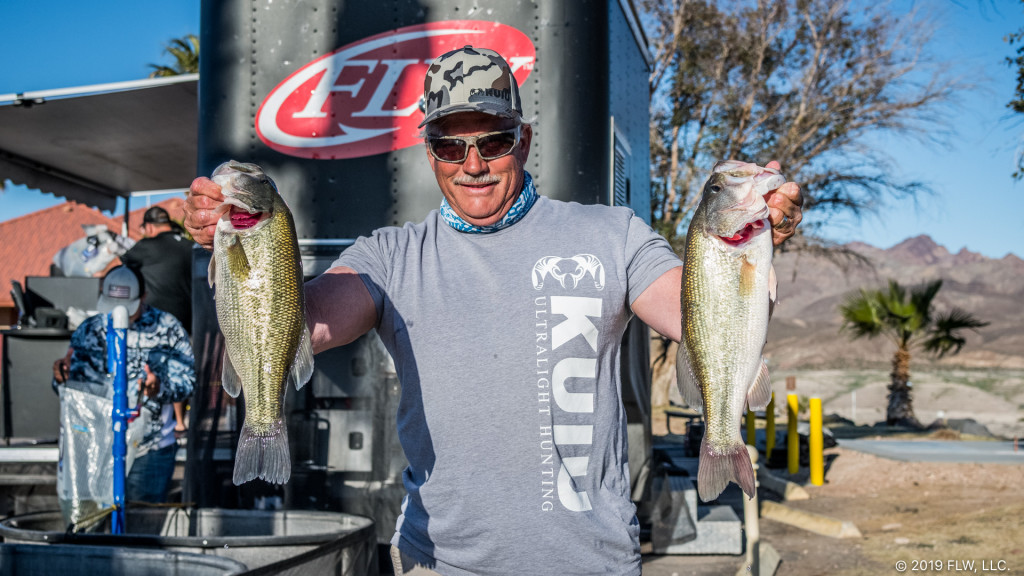 Brett Leber, who calls the California Delta and Lake Berryesa his home lakes, is no stranger to shallow-water fishing. He played to his strengths on day one of the Costa FLW Series Western Division event presented by Ranger Boats by fishing 6 feet or less of water with reaction baits to weigh in 15 pounds, 12 ounces of fish.

Leber has fished several US Opens on Mead – including a fourth-place finish – and is comfortable, confident and pleased with his day-one performance. He’s been drawing from much of that experience on the massive clear-water fishery so far, even fishing many of the same spots he’s done well at in the past.

The 59-year-old Californian got on them in practice this week, which only served to boost his confidence heading into Thursday. He landed an 8-pounder and a 5-pounder in two key spots he fished on day one in practice. Those areas had slightly stained water and were holding fish just starting to move up for the spawn. On a lake like Mead, stained water is hard to come by, but the steady, strong winds seem to be helping in Leber’s cause.

His approach has been fairly simple so far: Find shallow, stained water, preferably with some vegetation such as tulies or grass, and rely on a swim jig and swimbait to entice a reaction bite. While many others are fishing slow with finesse tactics, it’s slow power-fishing that’s serving Leber well.

His swim jig of choice this week is a 3/8- or 1/2-ounce Strike King KVD swim jig with a Strike King Rage Tail Craw trailer, both in green pumpkin with some other accents. For swimbaits, he’s using a 3.8 and 4.8 Keitech Swing Impact FAT on an Owner head.

His plan to replicate success on day two? Do it all pretty much the same.

Despite having a late boat draw and having to break in his new Nitro Z21 during the practice period, Leber made the most of his first session on Mead. He has an early boat draw on Friday, and with his spots already singled out, he’ll have a chance to find out exactly how many fish are left for the rest of the tournament. If the weather holds, fish will likely continue to move up to spawn, giving Leber more chances to employ the shallow-water techniques that work so well on California’s shallow, grass-heavy fisheries.

Still, Mead is fishing tough so far, despite the 15-plus-pounds it afforded Leber on day one. He only caught six fish in total (and lost a couple), so getting some quality bites might once again come down to preparation, skill and a little luck. In Vegas, sometimes a little luck is all you can ask for. 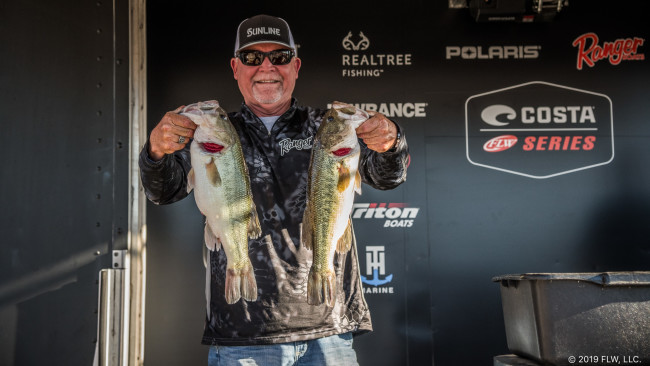 Ted Romero of Lakewood, Calif., can credit a lot of things for his co-angler lead following day one on Mead. It took skill to land 11 pounds, 15 ounces from the back of the boat. It took the right mentality and a good deal of perseverance, too.

But Romero doesn’t want to talk about that stuff. For him, it’s all about the pro he was paired with: Travis Archer.

“Travis is a great kid and a great boat driver,” he says. “We need more kids like him in FLW.”

Archer and Romero spent a lot of time hammering steep banks in just 5 feet of water. The co-angler leader caught his best fish on a spinnerbait and a Z-Man/Evergreen ChatterBait Jack Hammer, though he did employ a swimbait, a jig and a Storm Wiggle Wart crankbait at times as well.

Catching a lot of fish from the back of the boat is hard to do, and it’s even harder repeating that feat two days in a row. Romero knows it takes big adjustments and the ability to adapt to the conditions and boaters to make it happen.

“I just fish the conditions and adjust from there,” he says.