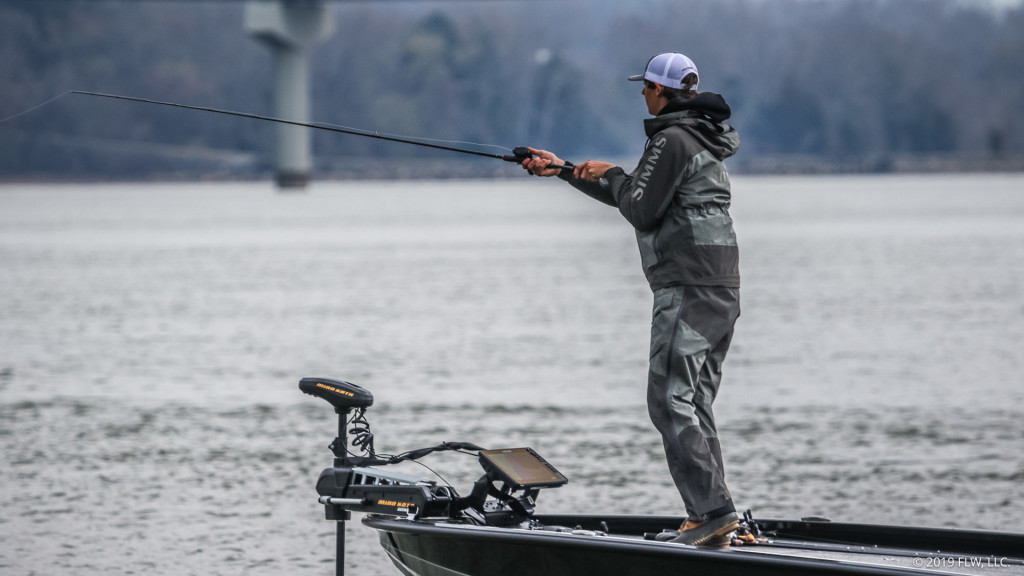 Despite indications that Chickamauga might be ready to churn out a bunch of mega-bags on day one of the Costa FLW Series Southeastern Division event presented by T-H Marine, early returns suggest the fishing has been a lot tougher than expected so far.

Forecasted temperatures in the low-60s haven’t reached that point. In fact, it feels significantly colder on the water, and cloud cover has been practically absolute. A little sunshine might go a long way toward some bigger bags this afternoon.

There was an early flurry right after takeoff this morning with several anglers reporting at least a couple fish by 9 o’clock. FLW Tour pro Darrell Davis said he had four small ones by 8:45 in the morning. He was throwing a spinnerbait along some rocky shoreline not far from takeoff. He also threw a jerkbait at some schooling fish busting bait on the surface, but with no luck.

Umbrella rigs have been the weapon of choice across much of the tournament field so far. Rick Taylor and Cody Green both reported a couple keeper fish by about 9 o’clock, and both were tossing around an umbrella rig when we pulled up on them. Bass-fishing legend Roland Martin joined the party, too, slinging around a rig and reporting a couple small fish by 9:30. Jimmy Bass was also throwing a rig, but his best luck with it by 9:30 was losing a big fish. “It felt like a good one, anyway.”

Brian Holder is one of the few anglers to indicate having a limit to this point, at least of the pros we’ve interacted with out on the water. His was about 14 pounds at the time, while Dakota Ebare said he had five fish in the box for about 12 pounds. Additionally, Dylan Fulk caught a 7-pounder just a few minutes ago, so we’ve at least run into one angler with a big Chickamauga bass.

Between the considerable wind and ripping current, the bite certainly seems like it should be a little better today. The water has come up about a foot – which might be repositioning fish a little bit – and the sun is starting to peek through in the north. There’s still plenty of time for the slow morning bite to evolve into a strong afternoon flurry.

On the bright side, all the huge fish caught during practice this week are still out there, and all it takes is one right move to put together a huge bag of fish. In a 192-boat field, it’s a certainty that someone – and probably multiple anglers – is going to catch them.