Morris Still the Man on Top 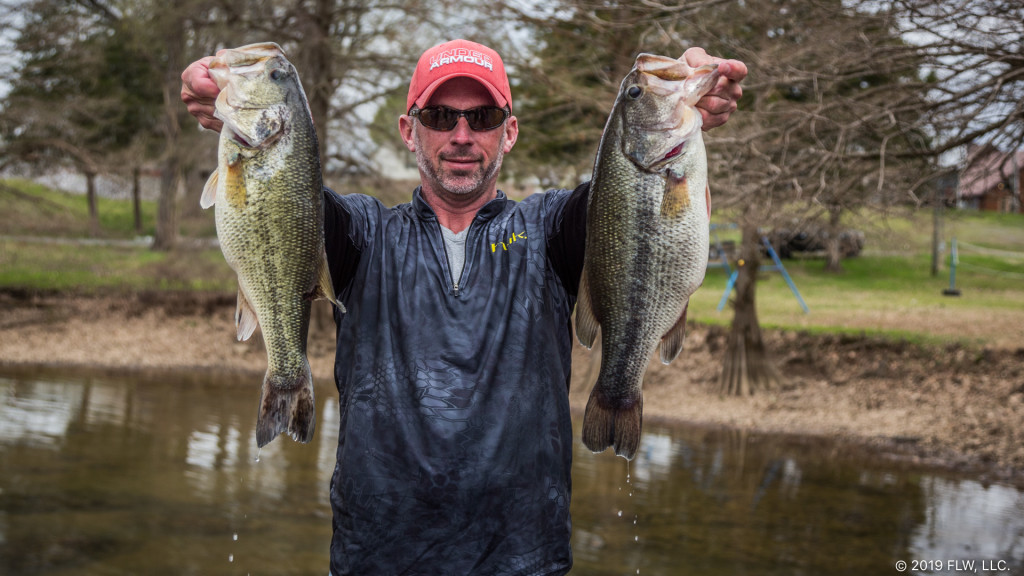 He was concerned he should’ve gotten more, but it turns out that Jake Morris had enough weight on day one to withstand a leaner day two and retain the lead at the Costa FLW Series Central Division opener presented by Lowrance on Kentucky Lake. Morris’ two-day total is 38 pounds, 6 ounces.

After topping yesterday’s field with a limit catch of 24-10 (the tournament’s heaviest bag), the McKee, Ky., pro managed only three keepers today for 13-12. Clearly, Morris was around quality once again, as he expanded his lead from 4-9 after day one to a whopping 7-pound, 6-ounce margin going into the final round.

“I probably should have stayed a little longer yesterday and seen what I could’ve caught, but I probably left them too early because they weren’t biting as good this morning,” Morris says. “I had to back up and punt today and move to a couple of other locations. I got lucky this afternoon and caught one that was about 6 pounds.” 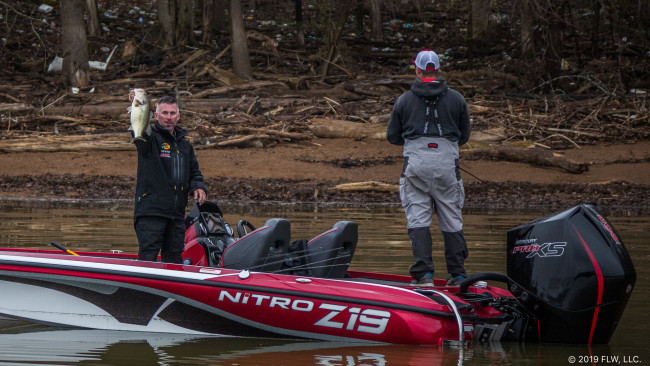 Morris started out on the same undisclosed area as he fished on day one. It features an assortment of rock and wood in 4 to 5 feet of water. That spot offered a handful of opportunities, but he could bring only two fish to the boat.

“I set the hook on my first fish, the rod bowed double and it just came loose,” Morris says. “I caught one big one, fished another hour and caught a small one. Then I fished and fished and fished and finally stuck another one that was probably the biggest one I’ve had on. I had it on for three to four seconds, and it came loose. I was about to cry then.”

From there, Morris ran 20 miles to one of the spots he was planning to save for the final day. Similar in depth and makeup to his main area, this spot yielded his third and final keeper.

Morris says the day-two weather played a big role in his productivity. Specifically, lack of wind hurt him.

“A little bit of wind probably helps my spot,” Morris says. “The areas I’m fishing are protected, so I don’t care how hard it blows. A little ripple on the water will help.”

Morris caught all of his day-two fish on a 3/8-ounce chartreuse tandem spinnerbait with a Colorado and willow-leaf blade. The right presentation: glacial.

“I still don’t think I’m fishing it slow enough, but if I go much slower, I won’t even be reeling,” Morris says. “It’s scary how slow I’m reeling, but it makes a big difference.” 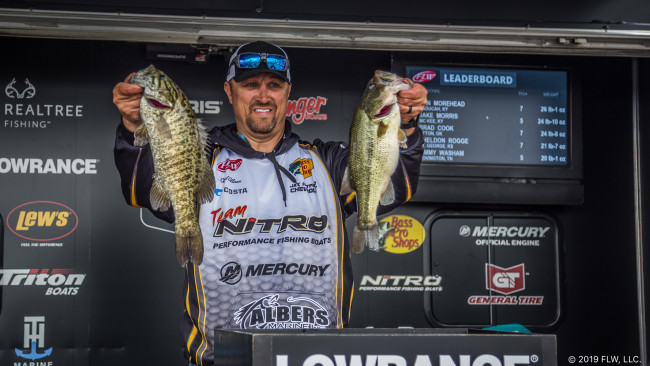 Improving both in fish count and weight, Chad Allison rose from fifth place to take over the co-angler lead with 20 pounds, 7 ounces. The Carl Junction, Mo., co-angler had three fish for 8-13 on day one, and today he added a quartet that weighed 11-10.

After fishing near the Kentucky Dam on day one, Allison found himself facing shallow river habitat today. Adjusting to this scenario was essential, so he stayed loose and fished what was in front of him.

“I just slowed way down today,” Allison says. “I knew I needed a few more bites to make this top 10. This time of year, I have a few baits that I have confidence in, and I like to keep them in my hand because I know it’s a grind to get bites.”

Allison says he had a jig and an umbrella rig in his arsenal, but he kept his specific details under wraps. He did note that he’s making key adjustments to maximize effectiveness.

“I feel like the fish are definitely moving back to where they want to spawn,” Allison says. “I’ve weighed in four pretty big smallmouths, and they’re coming in first. That’s what keeps me going. I’m looking for what they should be spawning on and throwing at it.”