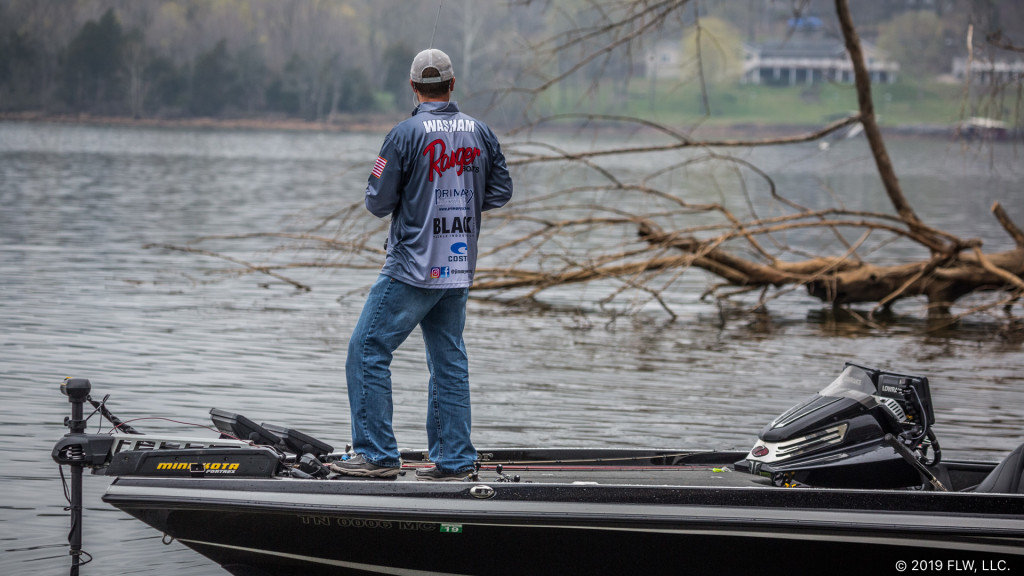 A huge day-one limit of 24 pounds, 10 ounces buoyed Jake Morris’ winning performance in the Costa FLW Series Central Division event presented by Lowrance on Kentucky Lake. The stellar start allowed him to establish a lead that was never seriously threatened en route to a winning total of 44-2.

The McKee, Ky., pro devoted most of his time to a particularly attractive prespawn area on Lake Barkley, which connects to Kentucky Lake through a canal. Spinnerbaits produced all of Morris’ fish.

Similar approaches worked for the rest of the top 10, most of whom devoted their time to fishing Barkley. 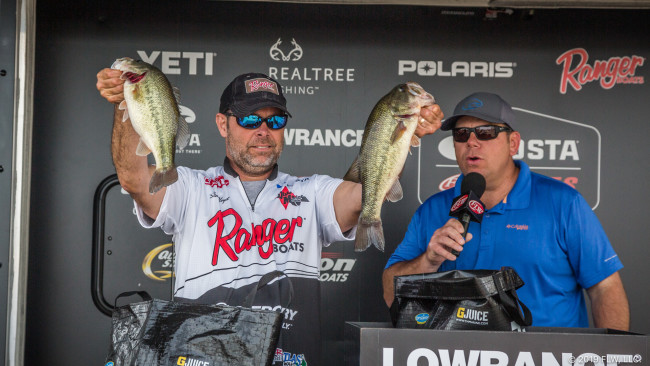 It’s understandablethat someone would see the name “Floyd” in the top 10 and assume it’s 22-year-old Bethel University stud Cole Floyd. Spoiler alert: We have the young Floyd coming up shortly, but the second-place spot went to the man who taught him to fish – his dad, Steve Floyd. Steve tallied a tournament total of 37-4.

The Leesburg, Ohio, pro made one of the biggest comebacks of the event, after placing 44th on day one with 6-3. Rallying with the second-heaviest bag of day two – 17-12 – lifted him into seventh place, and adding 13-5 on day three earned him the runner-up spot. Only Steve and third-place pro Shawn Kowal caught limits on day three.

“Day one, I was kind of a hard-head and should have done some things differently,” Steve says. “Day two, I finally figured them out. I went to Barkley and ran way south and caught all of my fish in about a foot of water.

“I had nine keeper bites on day two and lost a really big one. On day three, I lost one that might have helped me. That happens.”

The elder Floyd caught his fish by flipping a Berkley Havoc Pit Boss. HeTexas-riggedthe bait on a 4/0 hook with a 3/8-ounce tungsten weight.

“This is a special day to make the top 10,” Steve says. “I was ready to quit three days ago. I got one bite every day in practice. I love Kentucky Lake; I’ve been coming here my whole life. It’s fishing a little tough right now, but it’s going to come back.”

So, what’s his take on fishing the final round with his son?

“For both of us to make a top 10 together, I’ll always remember this,” Steve says. “I think he’s the best on the lake, but I’m a little biased.” 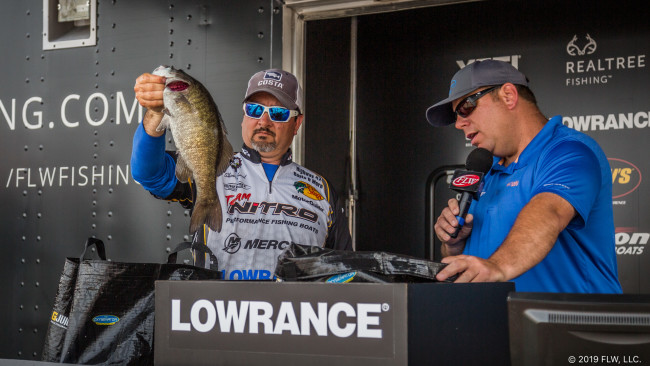 Shawn Kowal of Linn Creek, Mo., turned in one of the most numerically consistent performances of the event. He placed 20th on day one with 10-8, moved into ninth a day later by adding 11-11 and then added the biggest bag of day three – 14-6 – to end in third place with 36-9

The only angler to break 10 pounds all three days, Kowal alternated between an umbrella rig fitted with 3/16-ounce heads and white Bass Pro Shops swimbaits and a 3/8-ounce black and chartreuse Crock-O-Gator jig with a NetBait Paca Craw.

His biggest challenge was tracking down fish that appeared to be transitioning off their predictable prespawn areas.

“Practice was completely different; it was a lot easier because the fish were on points and stuff like that,” Kowal says. “It seems like they’d just started turning to go back into the spawning areas.

“The numbers just weren’t there. You’d catch on here, one there. I just had to cover a bunch of water.”

Consistently, Kowal found the first half of the day most productive.

“I did most of my damage by noon,” he says. “For some reason, those fish pulled off and were sitting out in no man’s land, I guess.” 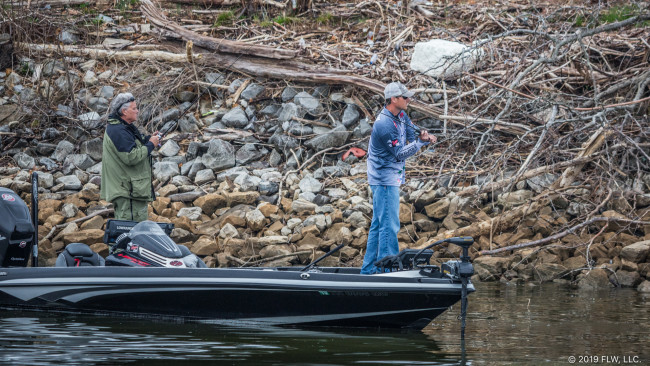 4. Barkley move pays off for Washam

Jimmy Washam of Covington, Tenn., made a bold move toward the end of his practice, and it paid off with a fourth-place total of 35-11.

“I fished Kentucky Lake the Monday and Tuesday before the tournament. I was catching some fish and figured I could maybe get lucky and get three or four big bites. Or, I could zero,” Washam says. “I had never fished Barkley, but I said, ‘I need to see some new scenery.’ So, on Wednesday I ran over there, and on the first place I stopped, I got two bites. One of them was a good one.

“I didn’t get anymore bites, but I knew that with the nights warming up, the area that I had found was likely to replenish. On Thursday, I hit it just right. The big fish were in there, ready to get that last shad before they moved on to do their thing.”

On day one, Washam caught five fish that weighed 20-1 and left. The second day, he found more boats in his area, and the added pressure plus clearing water limited him to a 10-pound, 10-ounce bag.

When the vexations intensified on day three, Washam ran around Barkley, trying to find similar scenarios of rock and wood funneling into spawning areas. When he came up empty, he returned to Kentucky Lake and tried the same, again with no luck. His final round yielded a single 5-pound keeper. 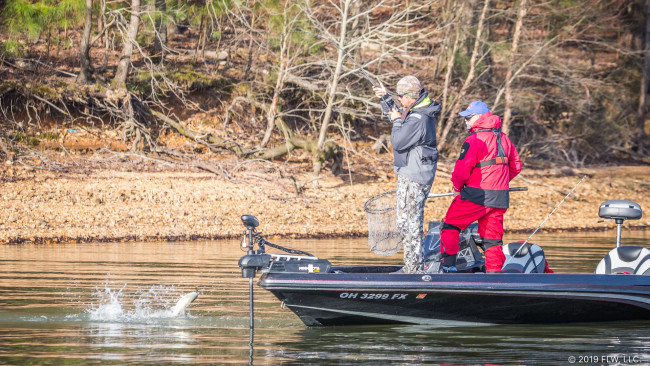 Cole Floyd of Leesburg, Ohio, caught 17-11 on day one and placed fourth. The next day, he bagged 13-5 and entered the final round in second place. As was the case for many of his competitors, day three proved super stingy, and his two fish for 4-6 pushed Cole’s tournament total to 35-6.

Cole says that the key to getting bit was slowly dragging his baits along gravel banks and paying particular attention to any wood he found along the way.

“I had a 70- to 80-yard stretch of bank where I caught 90 percent of my fish,” he says. “On day three, I got there and there was a bunch of people on the water, and I had some boat company on that place. My spot was drying up, and I was running out of fish.” 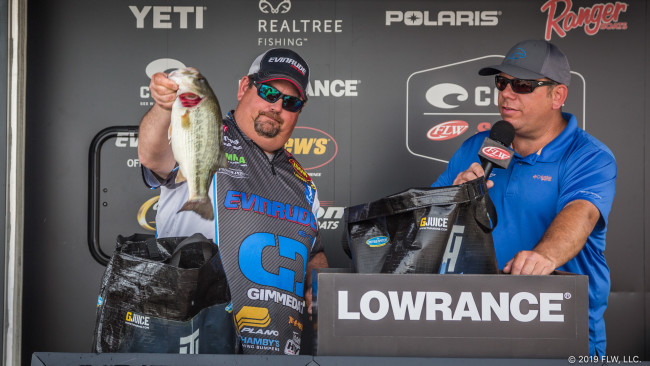 The self-described “Barkley Rat” made no secret about where he spent his tournament. Dan Morehead ran to south Barkley, where he expected more quality than quantity. His daily productivity told a corroborating tale. On day one, the Paducah, Ky., pro weighed three fish that went 10-6. He followed that with four for 15-11 and ended with a lone keeper that weighed 4-4. His final tally was 30-5.

“Even on a good day, I was only getting four to five bites,” Morehead says. “I knew day three was going to be tough. No wind makes it really difficult.

“I caught my fish on a Hildebrandt spinnerbait and a Phenix bladed jig on transitional spots. I think my fish went to spawning. My big bag on day two was less than a foot and a half deep. That lake cleared up immensely with no wind, so I knew it was going to be tough with a spinnerbait and a bladed jig.”

The one thing that baffled Morehead was the timing of his final day’s fish.

“The first two days I couldn’t get a bite before noon, and on the last day I got lucky and caught my one fish in the first 10 minutes,” he says. “I kind of thought it was going to be a good day, but I was probably too stubborn to change.

“That lake looked like a mirror pond, and that spinnerbait I was throwing looked like a 747. I was just swinging for the fence and hoping for big prespawn females. It was just a tough day.” 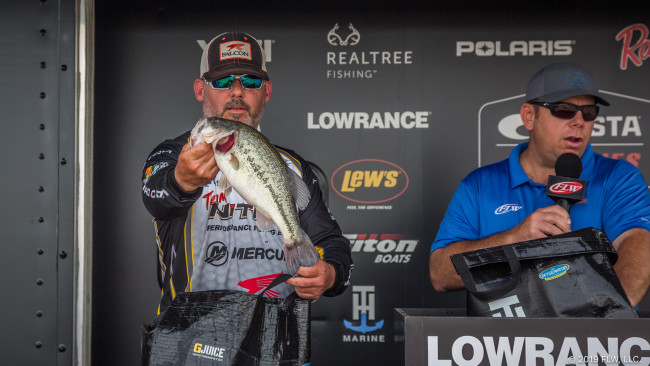 A strong opening-round effort gave Brad Cook the fuel he needed to survive a downturn in productivity and take seventh place with 30-3. The Afton, Okla., pro weighed 15-14 on day one and established himself at sixth place. He added 8-10 on the second day and 5-11 in the final round.

Cook caught a couple of his fish on a 3/8-ounce War Eagle spinnerbaitwith red and gold Colorado blades, but he did most of his work with a custom chartreuse flat-sided balsa crankbait.

“I spent all my practice in Kentucky Lake and had a little deal where I could catch numbers, but couldn’t catch quality,” Cook says. “I could occasionally catch a 3-pounder, but you had to catch 15 bass to get that.

“I went over to Barkley and found a spot. I was throwing a hookless bait and something grabbed it, and it felt like a biggun. I fired my blade up there and caught a 7-pounder. So I committed to one area for the tournament. I treated it like a lake, but there was a lot of pressure in my area, and I just ran out. That’s what I had.” 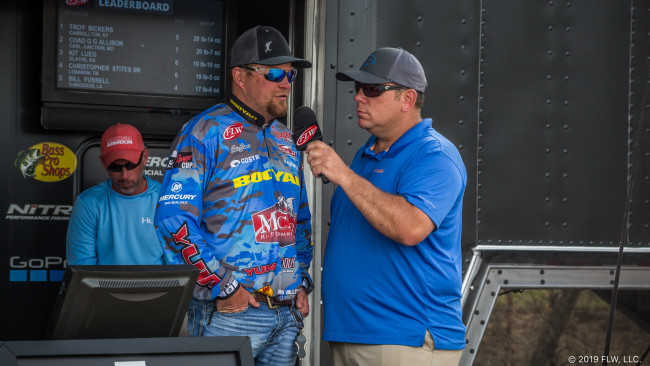 Christopher Jones of Bokoshe, Okla., made the biggest improvement from day one by rising from 75th to finish eighth with 28-15. After a slow start with one fish for 3-3, Jones stepped on the gas and sacked up 21 pounds – the biggest bag of day two – and rocketed up the leaderboard with a final-round berth in the No. 6 spot.

“When I found those fish in practice, it was blowing really hard, and they bit a blade [spinnerbait],” Jones says. “What killed me on day one was the wind wasn’t blowing as hard, and I was stubborn. I was running an hour one-way, and I went through there and spent too much time throwing a spinnerbait.

“On day two, the wind didn’t blow, and I knew they weren’t going to bite a blade, so I just went in there and said, ‘I’m going to figure out how to catch them.’ I knew this was about the only area where I thought I could make a big comeback.”

The key to Jones’ comeback was slowing down with a YUM Mighty Craw on a wobble head. He caught his fish on long rocky points in what he called a “textbook setup” right outside of spawning bays. 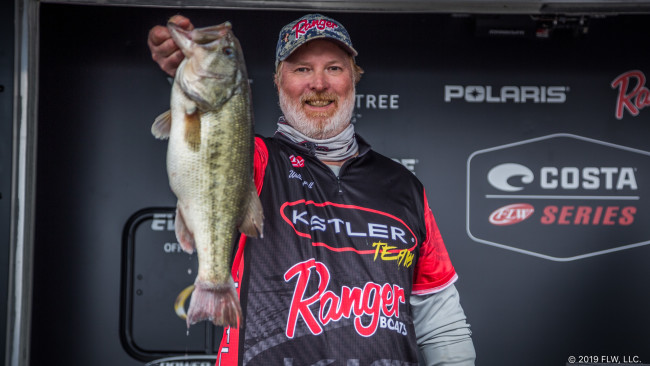 Dedicating his tournament to a friend and angling mentor, Joe Butler, who’s stricken with a serious illness, William Campbell turned in a solid performance with 10-3 on day one for 24th place and a day-two sack that weighed 11-13 and earned his final-round berth in the 10th-place spot.

Day three yielded only two keepers for 6-8 and a tournament total of 28-8.

“I’m thinking the fish over there changed because in practice I was catching them mostly on moving baits, but the first day of the tournament they weren’t hitting the moving baits, and I went more to just flipping,” he says. “They were acting like they were starting to set up to spawn. It’s been warm over there.” 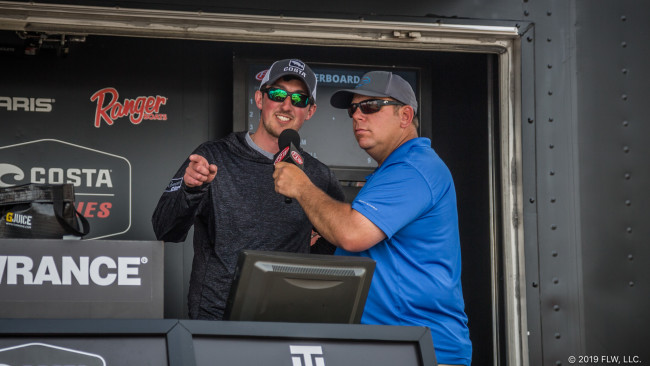 The final round proved insurmountably difficult for Travis Wilson, and the Illinois pro found himself with an empty bag. After placing 32nd on day one with 8-9, Wilson added 14-13 and made a big move to eighth place. After blanking on day three, he settled at tenth with 23-6.

“On days one and two, I really leaned on one bank in south Barkley,” Wilson says. “There was a 150-yard stretch that had rock and wood. I found that stretch in practice, and I had no idea how good it would be.

“The first day, I caught three fish off this spot, and on day two I caught four fish. On day three, I think they started bedding on that bank because I had a couple just pick up the tail and there was nothing there.”

Wilson caught his fish by flipping wood with a black and blue Reaction Innovations Sweet Beaverrigged on a 5/0 Trokar hookwith a 1/2-ounce weight. He also fished a bladed jig on days one and two.