11-pound limits for everyone 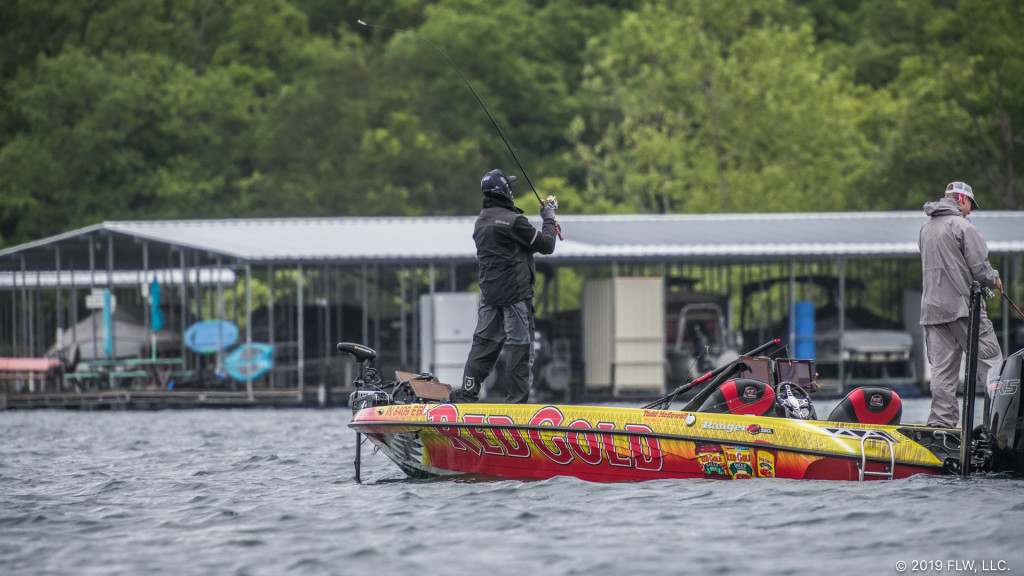 Can you catch an 11-pound limit? If you can, then you’re seemingly like every other angler on Table Rock Lake right now.

Catching fish is hardly the problem right now at stop No. 2 of the Costa FLW Series Central Division. It seemed like every pro our on-the-water crew pulled up on today, be it on the lower end or up the rivers, was setting the hook with reckless abandon.

Unfortunately, the quality has been extremely lacking, as “I have a small limit for 11 pounds” could’ve been the official motto for today. Kevin Meeks, Tristan McCormick, Josh Shirley, Casey Scanlon, Nick Morris, Chad Randles … the list went on and on.

A big reason for that seems to be all the larger females – largemouth, smallmouth and spotted bass varieties – have left their beds, particularly with the clouds and sporadic rain this morning.

Meeks found a 50-yard stretch in practice with a trio of 5-pounders. All of them were gone today. Same story for Jeremy Lawyer, who checked a number of pockets to find out all that was left on beds were males.

Now, Lawyer did also manage to nab a 3-pound spotted bass off a bed (and over a dock cable, for added difficulty) and had the largest limit of anyone we spoke with at around 12 1/2 pounds. At one point, he and his co-angler were doubling up on fish just by going down the bank in one tiny pocket, but hardly any of them kept.

Lawyer said he planned to spend his afternoon flipping in an attempt for a big bite. In fact, that seemed to be a common game plan. A number of pros mentioned doing the same, or at least trying a different pattern (cranking, topwaters, etc.) in an attempt to score a bigger bite.

While the vast majority of the pros were on the bank flipping flooded bushes and cover, or sight-fishing, Sheldon Rogge was on an offshore schooling bite that seemed to have some better quality and all three species. He only got one to come up and eat a topwater, and the rest were caught blind-casting out into open water. His limit’s weight when we left him was 11 to 12 pounds.

Greg Mansfield also was fishing offshore for smallmouths, but all the places where he’d been getting those bigger browns weren’t producing this morning. Take a guess what size limit he had …

The sun was trying to peek out just as we got off the water, giving many pros hope that the afternoon could finally produce a couple 3- and 4-pound bites. But to say this tournament will be one of ounces looks like an understatement at this point.

Weigh-in starts at 2:00 p.m. CT, and we’ll see who found that key kicker and just how tight the leaderboard will be.