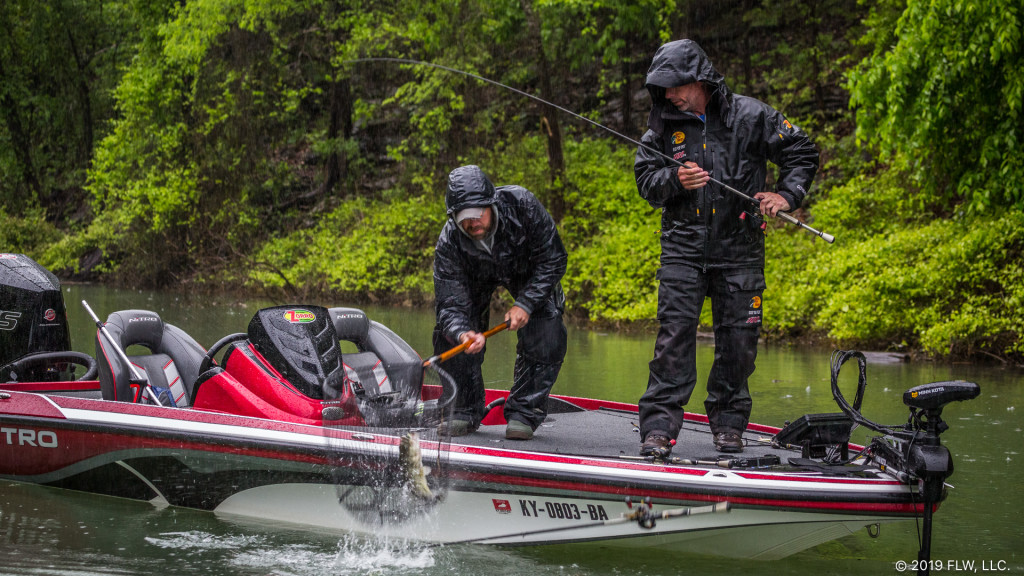 It seems like the door is wide open for anyone to win.

Less than 4 pounds separated 10th place from leader Jake Morris heading into the final day of stopNo. 2 of the Costa FLW Series Central Division, which is presented by Power-Pole and hosted by Explore Branson.

That might’ve seemed like a lot with how hard it’s been for most pros to get 3- and 4-pound bites and how easy it’s been for Morris to get those bites.

Well, nothing is coming easy today.

Anglers fished the majority of the morning in a steady rain, but the temperatures (both water and air) didn’t really change much. That had pros plenty excited, especially those tossing topwaters, as the conditions seemed perfect.

Instead, the only limit we came across was in Todd Castledine’s boat, and it was only for maybe 10 pounds. He says he’s caught more small fish this morning than all week in practice, as his bigger smallmouths seem to be unwilling to commit.

Likewise for Morris. A member of our on-the-water crew trailered all the way up to McCord Bend, far up the James River, to find him, and he got to watch Morris swing on a lot of fish. Unfortunately, the only ones that were getting his frog were small ones, while the bigger bass just kept missing for whatever reason. At one point, he had a 3-pounder launch itself completely out of the water to attack his frog, but Morris didn’t get a hook in her. He tossed back in, and the fish did it again. Yet, again, the bass never got the whole frog and went unstuck.

Worse, of Morris’ three coves, he only caught one keeper from his first one, while the second only produced a couple bites, and the third produced zilch. He says the water in all three has cleared up considerably, and at around 9:30 a.m. he yelled “abandon ship” and ditched his pattern to start heading back down with just his one keeper.

Matt Wood also was struggling, as he had only managed a pair of 2-pounders by 10:30 a.m. That said, Eric Olliverson’s morning smallmouth pattern netted him a quick keeper, and at some point he’ll go flipping, which has been his bread-and-butter this week. Same with Dakota Ebare, whom we didn’t find but who has been flipping up some good fry guarders.

With Morris struggling, Todd Castledine has the lead, but his weight is far from insurmountable if someone can crack a bigger bag. It should make for a tight and interesting weigh-in at 3:00 p.m. CT.